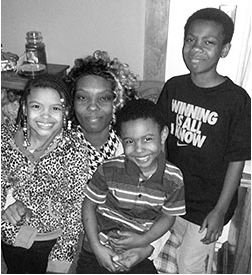 From ages 8 through 18, I was a foster child. I was in so many homes that I can’t remember them all. Some of my foster parents abused their authority. I didn’t know if my real parents loved me. I felt like everyone was against me.

I was 17 and at the hospital for a suicide attempt (my last) when I found out I was pregnant. I felt overwhelmed and so ashamed. I couldn’t take care of myself. How was I going to care for this baby? I had grown up with so much shame that I didn’t know how I could bear any more.

From the beginning, though, I wanted to prove that I could break that rusty chain of dysfunction. Reaching out for help was one way I could do that.

When my first son was born, a worker from a home-visiting program came every two or three days and taught me how to love him. She said, “You can’t just feed him, change him and leave him in his crib. You have to show him affection.” I looked at her like, “What does that mean?” But over time I learned how to cuddle him, and to appreciate the amazing things he would do. I found I could give love to someone who also loved me.

I had two more children. As they got older, I sought out parenting groups and went to therapy. My children looked surprised when I finally started talking and not yelling so much. Over time, I began to actually feel calmer.

But when my children were 8, 3 and 1, their father started drinking, and then a cycle of domestic violence started. He called me names and threatened me. Eventually he assaulted me so seriously I wound up at the hospital.

In all, the violence lasted for about a year. I felt devastated. My childhood had been filled with so much hopelessness that when things started to go wrong again, I didn’t know how to hold on to hope. I started yelling at the kids, saying things like, “You all make me sick. I wish I could run away. Nobody cares about me.”

My kids were also scared for me. They didn’t want to go to school because they thought I wouldn’t be OK. My daughter didn’t even want to nap. My oldest son started acting up and his grades went from B’s and C’s to D’s and F’s. But I was so ashamed that I just put on a happy face for the world so no one would ask any questions.

From Enemy to Support

Then, in June 2012, New Jersey’s Department of Youth and Family Services showed up. As the investigators checked my children in the other room, I felt so vulnerable. After they left, I told my kids, “They’re here to take you away. Never put your trust in the enemy.”

That night in bed, I realized how much I sounded like my parents. I felt like DYFS’ arrival was the ultimate proof that I’d failed to break that chain.

But to my surprise, my caseworker became one of my main supports.

From the beginning, she showed me respect. When she walked into our home, she didn’t turn her nose up at it. Instead, she sat down on our ripped furniture seemingly without any thought. She took time to build a relationship with me. She helped with the practical things, like getting beds for my children. She advised me to go back to therapy. She showed me the good in myself that I just couldn’t see.

She also stuck with me as I struggled to decide what place my children’s father should have in our lives.

After DYFS showed up, my children’s father got locked up for domestic violence. I felt very sad, very lost. Still, I decided he’d hurt me too much and I pressed charges. But when he came out of prison and went into rehab, I knew I wanted to try again.

My caseworker didn’t tell me I was wrong but she gave me straight talk. She said, “He needs to get help or he can’t be here. Put it this way, either you’re going to protect your kids from domestic violence or we will.” I felt that her being blunt was her way of respecting me.

Eventually I saw for myself that his attitude hadn’t changed, and I ended my relationship and got sole custody of my children.

Through it all, the fact that my caseworker stuck by me gave me hope.

Now I am trying to make my children’s lives as positive as possible again. I go to their school events and try to give them the security they didn’t have when I was overwhelmed by domestic violence. Still, sometimes I think my children and I need more support. When your childhood is filled with so much pain, trauma and betrayal, it’s hard to create a family that feels free of those things.

My older son, in particular, seems angry that his life has had pain and not as much fun as other children. He’s in counseling but I wish I had someone to helpme help him really address his feelings.

Still, at least I am no longer in a place where I couldn’t give my children love or protect them adequately. I am so thankful to my caseworker for not judging me. Her acceptance helped me believe I could continue to make progress for myself and my family, even if that progress happens slowly.