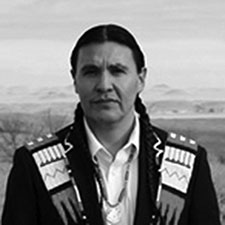 In 2005, Native Americans in South Dakota reached out to human rights lawyers because more than 700 Native American children in South Dakota were taken from their families every year. Here, Chase Iron Eyes, South Dakota counsel for the Lakota People’s Law Project, and Sara Nelson, its executive director, describe how people came together to bring about change:

Q: What led the Native American community to organize to reform child welfare?

Iron Eyes: Life on the reservation is defined by extremes. On the one side, we have beautiful ceremonial aspects to our lives, including respect for the land and a relationship with sacred sites. On the other side, we’re impacted by poverty and substance abuse and a lack of hope.

The destruction of our economic way of life and the boarding school era, when thousands of Native Americans were stolen from their families and sent to White-run boarding schools, had a deep impact on our community. My grandparents went to those boarding schools. My own mother went to one of those schools. Their intent was to break the family unit. I grew up with the effects of that. I never had a dad. My mother had a substance abuse problem until I was in 10th grade, when Lakota religious traditions helped her find stability and healing.

Q: How did the Lakota People’s Law Project get started?

Iron Eyes: Hundreds of children were being taken without proper investigations. In 2005, some grandmothers got together to try to change the situation. They didn’t have money and they didn’t know how to fight the system. But they got public interest lawyer Danny Sheehan of the Romero Institute to meet with them.

Nelson: Danny is a lawyer with many years of interviewing witnesses and he found the stories of the parents and grandparents he interviewed very credible. But when he talked to government officials, he found them unwilling to listen to the concerns of the community.

Iron Eyes: In fact, transcripts of the hearings that happen 48 hours after a child is taken into custody show that these hearings lasted only 4 minutes, on average, and more than 90% ended with a decision for the children to remain in care. Sometimes parents weren’t given a chance to speak or even told about the hearings. Then, more than 90% of Native American children were placed with non-Native families.

Nelson: In 2006, we opened a small office. There was a lot of fear—a lot. But plenty of parents and grandparents had the courage to come forward to tell their stories.

Q: What has changed?

Nelson: In 2011, two big things happened. First there was a lot of public attention to a case of a couple that had adopted Native American children out of foster care and abused them. When the children had asked the child welfare system for help, officials insisted they were lying. Then National Public Radio ran a series on the child welfare system’s treatment of Native Americans in South Dakota. Members of the United States Congress began asking for a hearing to investigate what was going on.

Now, eight of the nine reservations in South Dakota applied to receive a grant from the federal government to plan and prepare to run their own child welfare systems. One tribe has already received it. If they are approved, the tribes can recruit foster parents, improve their court system, and build their capacity to strengthen parenting and heal trauma on the reservations rather than create new trauma.