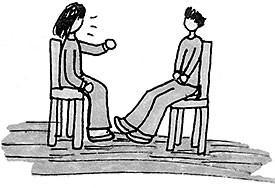 Around the country, a number of child welfare agencies are beginning to partner with communities to keep kids of color out of foster care. In 2007, NYC’s Administration for Children Services partnered with the parent advocacy organization Child Welfare Organizing Project on a new approach—offering parents at risk of removal the support of another parent who has dealt with the child welfare system.

In NYC, the decision whether to place a child in foster care is made at an Initial Child Safety Conference. Parents can bring family and friends for support but many don’t. They are shocked, ashamed, angry and afraid. As parents who faced the system ourselves, we know how parents feel. We also are familiar with resources in the community that can help families prevent removal or reunify more quickly.

One parent that I (Jeanette) worked with was Melissa. When I arrived at her conference, she was sad and confused. The allegation was that she failed to protect her son. Melissa would put her son to bed and then go get high. Melissa was very honest. She said she was getting so high that she would wake up someplace and not remember how she got there.

The decision was made to temporarily place Melissa’s son with her aunt while Melissa enrolled in a mother-child drug treatment program. Melissa felt like she needed my support so I contacted a drug treatment residence and escorted her there.

Later that day, she called and said, “I just cannot do it. I want to go home.” I was shocked but reminded myself, “Her addiction is calling. She needs me to be strong for her and her son.” I comforted her and reminded her why she needed to stay—and she did.

Many cases are not easy. At one conference that I (Bevanjae) attended, the allegation was sexual abuse of the children by the husband. The child accused her mother of knowing about the abuse for four years.

At the conference, the mother showed no emotion. She said, “I can’t believe he did that.” They ended up removing all of her children.

It was very hard for me to see that. My own daughter was a victim of sexual assault. I know how important it is to validate what your child says.

Still, I was able to support the mother. I connected her with a lawyer and encouraged her to come to CWOP’s parent-led support group.

During that group, I told her, “Your children are the ones you have to protect. They’re most vulnerable.” Then, as she listened to other people telling their stories, she broke down crying and said, “He can burn in hell! I’m going to do everything I can to get my kids back.”

In the conference, this mother showed only denial. But in the group, she was able to connect.

This year, NYC expanded the model citywide. It is now led by two larger organizations and not every parent advocate has been personally affected by child welfare. We hope that will change.

Some parents get tangled up in the system for no reason; others have real problems. Either way, with the right support from day one, more parents can make it through.