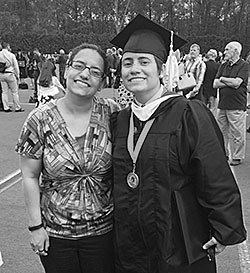 I had rocky times with my mother. Still, my mother worked hard to keep her children at home and she taught me one incredibly important lesson—to seek help when I was struggling.

Support in a Crisis

When I was 14, I became a teen mother like many girls who have spent time in foster care. The father and I had already broken up by the time I found out I was pregnant, and I felt very alone.

Then at 18, I met a guy who understood me like no one else had. When I told him I had been teased all my life for my large nose, he kissed it and said, “I love your nose.” He also had an alcohol and drug problem, and I began to attend Al-Anon, a 12-step program for friends and families of alcoholics.

In Al-Anon, for the first time I began to understand what my mother had gone through as a child and have compassion for her. Al-Anon truly became a lifeline for me and my daughter a year later, when I was 20 and my fiancé overdosed on heroin. I was in so much pain I wanted to die. Al-Anon was my support. For years, I went to meetings and just cried.

My daughter’s school was another place I found support.

Shortly after my fiancé died, my daughter started acting out so badly that her school put her in special ed, and a team of teachers and a counselor met with us weekly, individually and as a family. During one meeting, I cried so much I couldn’t talk. The counselor explained to the teachers that I was crying because my mother hadn’t been there for me the way I was there for my daughter. All that understanding made a huge difference to me and to my daughter, and after a few years my daughter made it out of special ed and on to the honor roll.

A Community of Alumni

Even with all that support, my memories of foster care remained the place where I felt most alone. One or two times in Al-Anon meetings, I mentioned having been in foster care, but no one “got it”. My sisters and I never talked about it either. It had just been too scary and confusing.

Only in 2009, when my mother went into the hospital for another breakdown, did we talk about how scary and awful it had been going in and out of foster homes. We cried and hugged each other. After that, I began to find ways to make sense of my foster care experiences.

For a while I joined the Foster Care Alumni of America. I wrote my story for a self-published book by foster care alumni. I also started seeing a therapist from A Home Within, which offers free counseling to foster and former foster kids.

These opportunities helped me to begin to feel like part of community of alumni, rather than alone with my experiences.