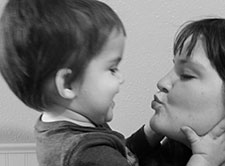 I became pregnant at 18. I was living in Champaign, Illinois, under state custody. I was a runaway from a transitional living placement and had met the man of my dreams.

We were in love and so happy to become parents. Still, I worried. I told my boyfriend all about my involvement with the state. He said we weren’t doing anything wrong so I didn’t need to be afraid. But I knew the system has a way of grabbing you and ruining your life before you can understand what’s happening.

Awestruck By My Son

When Vincent was born, I felt that everything in my life had been preparing me for this child. But Vincent never even came home.

Vincent didn’t have a sucking reflex and was in the NICU for 28 days. My boyfriend and I spent every day at the hospital. Sometimes I would sleep in the waiting room, waiting for visiting hours to start.

About two weeks into my son’s hospital stay I was holding my son when my cell phone went off in my pocket. I silenced it by turning it off through my jeans. The nurse told me I had to wash my hands.

“Just a moment,” I told her. She demanded, “No, now.” As I attempted to get up, still recovering from surgery, she walked over and wrapped her hands around my son’s torso and began to lift him up without a word to me—and without attempting to support his head. I panicked. Without thinking, I reacted by tightening my hold on my son and kicking the nurse as hard as I could.

Later I came to think that my experiences in residential care had influenced my reaction. Being in an RTC had taught me how uncaring staff could be when I was explaining something important. When I saw that nurse not hearing me, I think my mind snapped to thinking I couldn’t stop her with words.

But the damage was done. I was escorted off the property. The next day, my boyfriend and I met with child protective services.

The CPS investigator seemed suspicious of everything we said. She asked my boyfriend, “Do you drink alcohol?” He said, “Yeah, occasionally,” to which she replied, “What occasions?” My boyfriend was autistic and did not understand why she didn’t understand him. He became irritated and left shortly after the interview began.

As soon as she learned I had previously been in state custody, I could almost feel her mood perk up. At 26 days old, my son was taken into protective custody from the NICU because “the environment he would be in was injurious to his welfare.” Nothing more specific.

During the next year and a half, I was allowed to see my son just once a week. It was brutal. In truth, I never felt like Vincent’s mother after he left the hospital, just the nice lady he saw every now and then.

With the Department of Children and Family Services (DCFS), it felt like there was no way to do right.

My boyfriend and I got in an argument one night and the next week we were told it would help us if we split up, so we did. Then, in court, it was written, “Mother and Father…still talk to each other regularly” and “this could create a hazardous environment if they continue contact with each other.”

Then, when Vince was 18 months old, I became pregnant again. The Department told me that if I did not sign papers to terminate my parental rights to Vincent, they would be “waiting at the hospital” for my next child.

I was a broken soul. I never wanted to die more in my life. I wished I had been addicted to drugs, something, anything, to give me a reason why I wasn’t good enough. But I signed the papers. All I have now is the hope that someday Vincent will come looking for answers—and my love.

Then I ran away.

I was afraid that if I didn’t leave Illinois, DCFS would take my next child, too. My second child’s dad ended up in prison while I was pregnant, but his mom and stepdad in South Dakota said they would help me. When I got to Aberdeen, South Dakota, things didn’t go as planned, though. Just before Christmas, I ended up sleeping in my car in a Walmart parking lot.

Finally I called a church and asked if there were any shelters available (there weren’t) but a lovely woman named Sister Lois Ann put me in a hotel for about a week. Then she got me an apartment and furnished it herself with a bed for me, a crib, changing table, clothes for my baby’s arrival, everything a home needed.

Still, I was afraid of everything in the weeks leading up to Lucas’ birth. I was afraid to give the doctor my medical records. I was afraid to be asked about my Caesarean scar. Driving away from the hospital with Lucas safely in the backseat, I cried and told him how special this moment was.

In the months that followed, though, I was not as connected to Lucas as I should have been. I left him in the car if I ran into a gas station—it was easy to detach from his crying and not care. When I left him in the church daycare on Sundays, I didn’t really want to pick him up. I see now that I refused to care about Lucas because I was preparing for the inevitable.

But after about six months of hugs and smiles, midnight feedings, playtime and sleepy cuddles, my ice heart started melting. I danced around, made funny faces and sang in very high pitches to make him smile and laugh at his silly mommy.

And then, right when I was at my happiest…he was gone.

It happened one morning. Lucas’ dad had gotten out of prison and joined me in South Dakota some months before. He was feeding Lucas. I came into the kitchen to fry up some eggs. Dad put Lucas on the floor to play. At that point, Lucas was only kind-of sitting up and frequently fell over. That morning he fell backward. At first I thought nothing of it. Then I saw his eyes. They were rolling with no sense of direction and his arms didn’t look right. I had seen a seizure before and I knew that’s what this was.

I called 911 frantically. Lucas was taken to the ER and given a CT scan that revealed bleeding on his brain, and then he and I were flown to Sioux Falls to a specialist.

The specialist said an easy way to determine if the brain bleed was intentional was to do a retina scan. If there was no retinal bleeding they could rule out Shaken Baby Syndrome. I said, “Please do it!” To my horror, my Lucas had retinal bleeding. He was taken into protective custody.

I cried for hours, and am still crying as I type this three months later.

There were so many times I contemplated suicide in the next few months. The thought of someone telling my kids I gave up on them kept me going. During that time, I screamed at everyone but CPS to make sure that, when CPS saw me, I was always pleasant. I also did every service, every evaluation asked of me.

I was distrusting and afraid, but I started to lower my hackles when the workers put real effort into talking to me. Within two months, I was getting unsupervised visits every weekday.

My Baby Is Home

The separation hurt my son, too. Before he was taken, Lucas was so well tempered. But during visits, Lucas would be napping and start crying in his sleep. If I turned from him, he thought I was not coming back and would cry inconsolably.

To show my attorney his behavior, I scheduled an appointment with her while I had Lucas. My attorney told me she would ask the judge for physical custody—the same as “trial discharge”—at our next court date.

First we had a long Christmas visit. It was fantastic! I had Lucas for Christmas Eve, Christmas Day and the day after. We went to his dad’s grandma’s house and he took his first steps! I was on top of the world.

Then, on Feb. 24th, 2014, I was given physical custody of my Lucas! My baby was home and I was so, so happy. During our first week together, Lucas and I just hung out at the apartment in our jammies. I took him everywhere I went, in a carrier strapped to my belly.

Wishing for a Fairy Tale

Through all of this, my son Vincent has been ever present. Every day something reminds me of him. I tried once to fight for Vincent after my rights were terminated, and lost. I would like to continue fighting for him, though I know it’s a far stretch.

As a kid, I was fed fairy tales. Cinderella and all those girls were at their lowest points before something fantastic and beautiful happened. Maybe I’m still wishing for that.