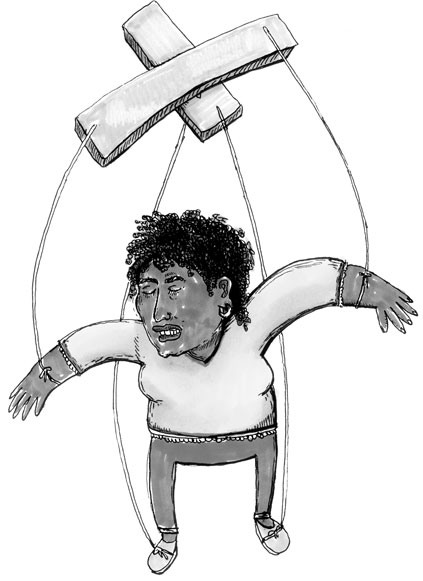 I was raised to have pride in who I am and stand up for what I believe. Standing up in court to admit that I neglected my children, I felt like everything I knew to be true and right was thrown out the window.

As the judge looked at me and said, “I strongly suggest you plead guilty,” I broke down and cried.

My lawyer put her head down and told me, “I will do what you want but she’s going to find you guilty. She’s already got her mind made up.”

I looked up at the “In God We Trust” written on the wall and wondered what God would take away my children. I just kept reminding myself that the system could not take what God had given me.

In 2008, my boyfriend Vito died suddenly. For two years after he died, I’d cook dinner and clean my apartment after my kids went off to school, and I’d spend time with them and make sure they did their homework when they came home. But a lot of times I was just going through the motions. Inside I was grieving.

On Fridays I would drop the kids off at my mom’s (my biological grandmother but my mom because she raised me) and go out partying. I wanted to have a good time and escape my grief. I knew my children loved me; I wanted to find a man to love me.

Scolded by the Judge

I think part of the reason my children were taken when parents in way worse situations than mine keep theirs is that I’d had several ACS investigations in the past. Most of them were harassment calls, though once a nurse in the hospital called because she didn’t like how Vito was reprimanding the kids and once the school called because I refused to put my son on medication for ADHD. The investigations stayed on my record and when ACS came to investigate again, it didn’t look good.

By my second time in court, I also learned that the judge I had had a reputation for being tough. She expected parents to be accountable for their actions and address the issues that had brought them to her court.

She told me I should be ashamed of myself for leaving my children in my mother’s home.

In court, I had two choices: Make a submission, allowing the court to find me guilty of neglect, or take my case to trial. My lawyer said that if I took the case to trial, it could drag on and on with my kids in care. My lawyer made me feel that if I wanted my children home quickly, I didn’t have much choice but to submit. Still, making the submission was one of the hardest things I ever had to do.

My lawyer said, “My client’s ready.”

The judge said, “What is your plea?”

Tears rolled down my face as I made my submission. My legs were weak. I thought I was going to faint. I felt drained, like the system had broken me.

After I made my submission, the judge said something like: “Do you understand what you are saying? Is anyone forcing you to say these things?”

It felt so crazy, like a rapist was forcing me to say that I’d wanted it.

Still, after I said that I’d made the submission willingly, the judge looked at me and offered me more visits with my children, almost as if to say, here’s a reward for what you just did, accepting your responsibility.

A String of Obstacles

Soon after that second court date, the foster mother of my two younger children said my youngest was acting out in ways that were sexually inappropriate, and the court ordered psychological testing of me and my children.

The psychologist who tested my daughter didn’t find anything sexually inappropriate about her behavior. But when they tested me, I hid my grief and the fact that I’d been partying because I didn’t know what they might use against me. What the psychologist wrote down in her report was that I lacked understanding of why my children had been taken.

By then, I’d also lost my housing, and the judge had discovered that I’ve received SSI since I was 8 years old, when my grandmother sent me to residential treatment because she was having a hard time raising me. This made the judge question my competence to raise my children. After that my case dragged on for a year and a half before my children were returned home.

I don’t know what would have happened if I had taken my case to trial. Maybe my kids would have been in care even longer. But from where I stand now, I wish I had never said I was guilty. At least I wish my lawyer and I had had more time to discuss what my submission might mean to my children and me.

Having that guilty plea on my record feels horrible. The worst part is that people don’t get to see exactly what I did or didn’t do, just that I have a record for being “neglectful.”

I still have a lot of anger at my lawyer. She may have thought she was looking out for me, but it feels to me like she sold me out.

Maybe one day I will be able to look back and see things in a different light, but right now all I feel is incredibly bitter.