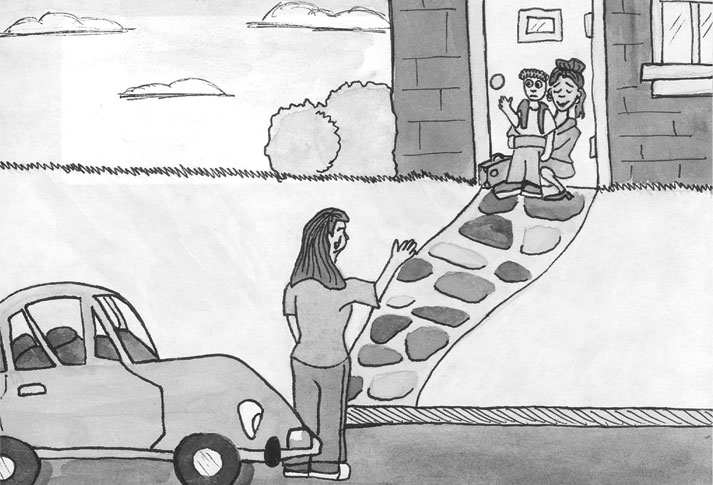 My baby’s father passed away when I was pregnant. After, I felt I had to block out everything I was feeling so I wouldn’t lose the baby. But I found out later that those feelings were still with me.

For three years, life was pretty uneventful for my son and me. We went to the park to feed the squirrels. We watched Sesame Street and Barney together. He would help me make dinner and we’d eat it together. We spent a lot of time just the two of us.

Black Hole Inside Me

Then my mother died and a black hole opened up inside me. All the feelings I’d held back for so long came rushing back. I didn’t want to feel those feelings so I started snorting cocaine and smoking crack, too.

Soon, my son and I were spending a lot less time together. I’d send him to his room by himself to watch TV for hours. He’d even eat in front of the television by himself.

The next year, ACS took him away from me. I never thought I’d get him back. My ACS worker told me that she would make sure the foster parents he was with would adopt him right out of my life. She said there wasn’t a thing I could do about it—and I believed her!

The first time I was able to see my son was about six weeks after they took him. When the agency sent me a letter to let me know where my son was living, I was overjoyed—and scared. I didn’t know what to expect or how to act.

I was a nervous wreck on the bus ride to go see him. And when he arrived at the agency where I was impatiently waiting, I didn’t recognize him. When they took him from me, he had a long tail and hair to just above his collar. Now his hair was shaved in sort of a mushroom cut.

When I was told, “There’s your son,” I think I went into shock, and my son and I spent nearly the whole visit crying all over each other.

Maybe it was the guilt I was feeling, but I felt I could see the mistrust in my son’s eyes. I didn’t know how I would be able to win back the trust I had stupidly forfeited.

He Called Someone Else ‘Mom’

The worst part of the visit was when I heard him call the foster mother “mom.” I flipped out. After the worker and foster mom calmed me down, they explained to me that it was to make him feel at ease, and because her other foster kids called her that too.

They tried to reassure me that I still was and would always be his mom. But here was my son calling some other lady “Mom.” I felt sure this was just another proof that my ACS worker was making good her threat to keep my child from me. Then she told me it would be two weeks before I would be able to see my son again, and that would be only for one hour. I was devastated. I left there in a daze.

But shortly after that I began coming to a focus group for biological parents to ask questions and get information. I ended up helping to organize their Birth Parent Advocates Program. That support helped me manage the hard times.

His Foster Mom Supported Me

Plus, I came to know my son’s foster mother and she made our visits go easier and helped me get my son back. My agency, Seamen’s Society for Children and Families, has a family to family approach—that is, we try to keep open communication between the birth and foster parents so that a friendship can develop.

This lets the children know they aren’t a prize being competed for; they are loved and cared for and have just acquired an “extended family” to help take care of them while their birth parents are unable.

My son’s foster mom would assure my son that he’d be going home someday soon. She even had the agency’s psych department give my son therapy to help him with all the new and confusing feelings he was having.

Still, seeing my son for one hour every two weeks took a toll on our relationship. I felt like I was in a bad dream that I was moving through in slow motion.

I no longer knew how to act or what to say around him. I tried to make it up by bringing “things” to every visit. But then I would wonder whether he was happy to see me or the gifts. The worst part was saying good-bye after every visit. That’s when all the guilt and remorse really set in. I wanted to kick myself for being such a screw-up.

I think my showing up consistently for our visits started the healing process. It helped to show my son that I could be trusted again. If I told him I would be at the agency to see him in two weeks, and then I showed up, he knew I was reliable and kept my word. It also showed the agency that I was capable of being a responsible parent again.

Eventually, our visits were increased to one hour once a week, and then two hours every week. Finally, I was able to take him for an occasional overnight, then weekends.

Having my child over night again created new tensions and stresses for both of us. He wasn’t real sure how to act with me; I worried about saying the wrong thing or losing my cool. But I just took it minute by minute, and eventually we began to have a natural relationship again.

You can’t know how wonderful it is to be able to just call your child in from the backyard to eat dinner until you’ve experienced not having him there to call. I found most pleasure in the smallest things; wiping away a tear, kissing a booboo or just getting a hug.

The best Christmas present I’ve ever gotten was when I was told I could have my son for his Christmas vacation from school. That became his trial discharge home to me. After almost 18 months of hard work, I got him back!

My son has been home almost three years. We still have our ups and downs. He still occasionally acts out in school and every once in a while he has a bad nightmare, like he did after he was taken away from me.

I am in the process of trying to find a therapist for him that I can afford. I think it’s important because the feelings he experienced while I was using drugs and then when he was in foster care aren’t going to disappear just because we’re a family again. My son and I talk to each other about what happened and how I hope he will believe me when I tell him it will never happen again.