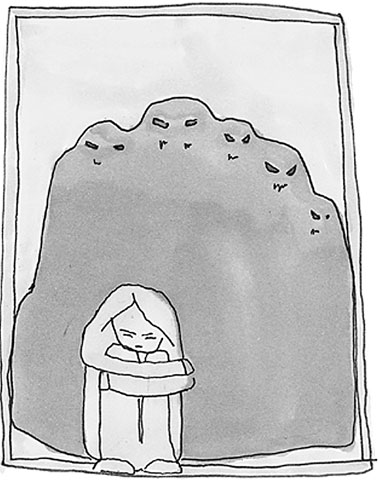 In November 1999, ACS sent me to Women Connect, an outpatient substance abuse treatment program affiliated with Lincoln Hospital to deal with my drinking problem. It turned out to be the beginning of a new life for me.

I was blessed with Ms. Angela Torres, my substance abuse counselor. Now I’ve been clean for five years. Last month, I was even hired as a parent advocate at Children’s Village, a foster care agency. To find out how other parents get help with their addictions and get their kids home, I went back to Women Connect and spoke with Ms. Torres. She explained the steps of recovery to me.

Ms. Torres said that addiction is a habit that takes over your life. Even though you’re aware that a certain behavior—like drinking, using drugs or even staying in an abusive relationship—has negative consequences, you repeat the behavior anyway. You’re always doing the same behavior and expecting different results.

The first step toward ending an addiction is breaking denial, Ms. Torres said. Denial is what allows the problem to take over your life. You don’t keep using drugs if you’re aware that it’s hurting you and your family. “Once denial is broken, there are possibilities,” Ms. Torres said.

Ms. Torres said it’s usually easiest to break parents out of denial when their kids are in a foster home. “When the children are given to a relative, the parents say, ‘I haven’t lost them really,”’ she said. “It’s much harder for the parents if they have to say, ‘I don’t know where my children are.”’

When I first went to Women Connect, two of my daughters were in foster care and my son was living with my sister. Even so, I was totally in denial about my alcoholism. “In the beginning, you were not compliant at all,” Ms. Torres remembered. “Many times you came in under the influence.”

Ms. Torres gave me tough love. After three months, Ms. Torres told me, “Go home and pack your underwear. You’ve hit rock bottom and it’s time for you to get up.”

She sent me to inpatient detox and rehab upstate for 35 days. When I went back to Women Connect to continue outpatient treatment, facing Ms. Torres without my mask of anger was overwhelming. But she was happy for me. She said, “I knew there was a good person under all that drinking.”

One thing I didn’t like about recovery was that I had to talk about my childhood. I asked Ms. Torres why treatment often brings up the past. “Because childhood issues are often the reasons why people turn to drugs,” she said.

How people treated you in your household, and how they treated each other, can set you up for feeling bad about yourself. “If you don’t value yourself, then you don’t care what happens to you,” she said.

Once denial is broken, counselors try to help you see that your life can be better. “We give people some sense of hope that they can achieve things for themselves and their children,” Ms. Torres said.

It helps that, once you get sober, your thinking gets clearer, your behavior gets better, and the counselors can begin to see all the strengths and skills you have. Once I’d been sober for a month or so, I started feeling better about myself. I told myself, “I have to get my family back. I’m not worthless. I can accomplish things if I make an effort.”

Ms. Torres told me about another client of hers who was resistant like me. We’ll call her Brenda. Brenda was using marijuana and her mother was taking care of her.

When Brenda came to Women Connect, she was not compliant and ended up getting discharged. Then she made a complete turnaround. Ms. Torres thinks that happened because Brenda’s mom got fed up. She told Brenda, “Here’s your children. I’m not taking care of them.”

At first, Brenda started using even more because she was stressed out. Then ACS got involved and Brenda returned to rehab. “We did an intervention kind of thing, like, ‘If you have no problem, then why do your kids need to be with your mother? Why is ACS involved?”’ Ms. Torres told me.

Once Brenda faced her addiction, she changed. “She was a real hard worker, a real go-getter,” Ms. Torres said. Brenda stuck with rehab, got her GED, got her kids back, got her driver’s license, started driving school buses and is now hoping to go to college.

Many times parents don’t believe their addiction hurt their children. “They say, ‘I feed my children. I don’t leave them home alone,’” Ms. Torres said. “But I don’t think feeding your children is really enough.”

Ms. Torres says she confronts parents first with the less severe kinds of neglect, saying things like, “If your kids are giving you so much trouble, what role are you playing in making that happen? Something’s missing in your child’s life when they act out. Remember how you felt as a child when you acted like that? That’s how they feel.”

One painful thing is that, once parents get clean, their kids (especially their teenagers), “can get really nasty,” Ms. Torres said. The kids want their parents back, but they also have so much anger.

To start having good relationships with their children, families and partners, Ms. Torres said parents need to learn to set boundaries. Boundaries are rules that protect you and others, that make you and other people in your life feel safe.

When a parent is addicted, she doesn’t set any boundaries, like curfews or chores for her children. If your kid was coming in and out of the house at any time while you were drinking, you need to start setting boundaries by saying, “I wasn’t aware of that when I was drinking, but now you need to be home by 9 p.m. or you’ll be facing consequences.” And you don’t set a boundary unless you stick to it. You’ll lose face.

Parents can also connect with their children by talking frankly about the past and giving their children hope for a better future. “Saying, ‘Look what I did. I don’t want that for you.’ Or, ‘Now I know how to be different, and I’m trying to be here for you more than my parents were for me,’ can show your kids that things can be different and better,” she explained.

Ms. Torres told me that she believes everyone can get to recovery if they work hard. “We give people the opportunity, and they have to run with it. And it works. We do reunite a lot of families,” she said.