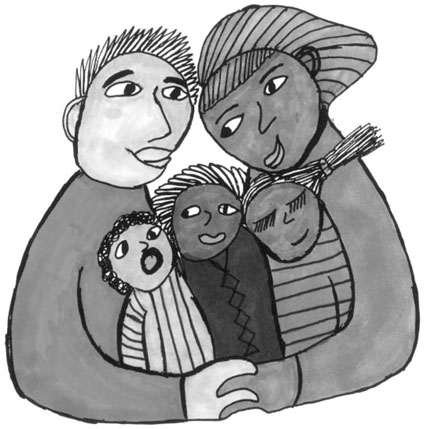 I took my wife to the hospital because she was having contractions. It was early for her to be in labor, so the doctor did all kinds of lab tests. When he came back with the results, he told us that she had tested positive for meth.

I was so shocked and hurt. I couldn’t believe it.

Sandra denied that she was using meth. But I started to put two and two together and I realized that it made sense.

At that time, Sandra was so different than when we’d first met. Early in our relationship, Sandra had been my best friend. What attracted me to her most was that she could see and love the good in people. We talked for hours. I just knew she was the woman I would spend my life with.

When we started a family together, Sandra was a very caring and devoted mother. I would go to work and come home to find the house clean and dinner made.

But then I started to come home to find the house a mess and Sandra exhausted. I would take the kids out to play in the yard, wash them, feed them and so on while Sandra slept. When she woke up, Sandra would have an attitude. She was mad at the world. I missed the bond we had shared, the conversations we had.

All we seemed to do anymore was argue. Once I told Sandra that it was over. I said, “I’m tired of you putting me down and tired of fighting.” Sandra said some terrible things to me—that she wished that I were dead, that she wouldn’t let me see the kids. Her words scared me.

My Trust Was Gone

When I found out she was using drugs, my trust in Sandra was lost. I wanted to end our relationship for good.

The next day Sandra went into labor and gave birth to our baby girl, Destiny. At the hospital, Child Protective Services (CPS) told us we could not bring the baby home from the hospital. They said our four other kids might go into foster care, too.

I didn’t know whether to fight the CPS worker or run out of the hospital and hide my other kids so they wouldn’t be taken. The worker told me to come to a meeting at the CPS office later that day.

I Still Had Hope

First I went to a barbecue at my school to celebrate that five other grads and I had finished the class to become certified forklift drivers. Then I went to the meeting. When I got there, I broke down crying. I felt that all the work I had done was worth nothing. My life was falling apart.

But the workers talked to me and made me realize that there were options for my family. They said that some of Sandra’s behaviors toward me were probably related to the meth, which causes users to act mad and frustrated because they are up for days without sleeping when they’re high, then sleep for days. They also don’t eat right and lose a lot of weight. Those were all of Sandra’s symptoms.

I realized that I still had hope for Sandra, so I told the CPS workers that if she did a program, I’d be willing to work things out. They offered her outpatient so she could be home with the kids and me, but I insisted that she go to a treatment center with the baby. I thought that was the only way that she’d succeed.

While Sandra was in treatment, I became a single father. Life really became chaotic.

I was surprised that our CPS worker helped us out. She came to my house once a week and always asked if we needed anything. She helped us with child care, clothing and transportation, and with finding a new place to live where our kids could play outside.

Some days I was angry and felt that Sandra had betrayed our family. Other days I missed her and couldn’t wait for her to come home.

Help for Us Both

Sandra went to treatment at Westlake, where she and I both got the help we needed.

Regular meetings with our counselor made me feel safe and confident.

The Family Group meeting helped me stop feeling scared of talking with other people about my problems. Family visits helped me start trusting Sandra again.

I began to see the difference in Sandra’s attitude. She was so attentive to the kids, playing tag with them and taking them on the slides. One day we sat down as a family and had a picnic. We were able to talk without arguing. It was one of the best times we had shared with Sandra in a long time.

I also saw the work Sandra was doing to be sober and to take responsibility for the ways her addiction had hurt our family.

One time in Family Group, Sandra got up in front of everybody and told me, “I’m sorry for everything I put you and the kids through. I’m trying my hardest to change. Even though I can’t take back things I did in the past, please give me the opportunity to work as a family in our future.” She expressed her gratitude for all my support.

I got teary eyed and had a knot in my throat. I told her, “We will give it a try.” On the way home, I broke down and cried. For the first time, I believed her and knew that we had a shot at being happy again.

The changes we went through brought us a closeness that I had never felt before. The day Sandra came home felt like the first day of the rest of our lives.

I picked Sandra up from the program by myself. We went to our new apartment to unpack her stuff and we just sat there talking for almost two hours. Then we went to surprise the kids.

I had left them with my sister and told them that I was going to work. Sandra knocked on the door, and when the boys answered, they were so surprised! They started crying and hugging her, not wanting to let her go.

Later we took the kids to get some KFC and had a picnic at a park. We all ran around and played until it got late.

Now Sandra has been clean for 15 months and she is a new person, wife and mom.

At first, she continued with treatment twice a week and went to parenting classes and random drug testing. It was amazing to see her dedication. When she was using meth, she would say one thing and do another.

Now Sandra is in school full-time, studying business. (The CPS worker helped Sandra get into school and paid for her books and supplies.) I stay home and take care of the children. With the roles switched, I feel that we are both able to appreciate what the other contributes to our family.

Things are not perfect. I would be a liar to say that this has not affected my children. They wonder whether Mommy is going to leave again, and they each deal with it in their own way.

Our oldest son, who is 6, witnessed a lot of our fights. At times he acts like he is scared to trust Sandra or is waiting for her to go back to the way she was. Our 2-year-old also seems to have abandonment fears. When Sandra first got home, he would never leave her side. He is only now feeling comfortable that, when she leaves the room, she isn’t leaving him.

Even so, we are all doing so much better. We let our children know that we are not perfect but we love them with all our hearts and that will never change.

I am so thankful for the support that Sandra and I got. Even though I was scared when CPS came into our lives, we wouldn’t have made it as a family if CPS hadn’t been willing to give us help. Now Sandra and I are a strong couple once again.