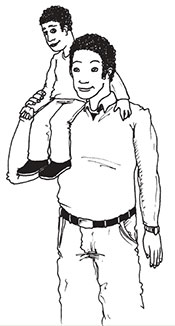 My journey in family court started because my fiancée died on me the day before my son’s 2nd birthday.

The day he was born, we’d had a little argument about his middle name. She wanted it to be James. I didn’t like it—I knew she’d had a boyfriend named James. She told me, “That’s my Daddy’s middle name!” I thought she was pulling a fast one on me!

That day, she submitted the birth certificate without my signature. It didn’t seem like a big deal.

Then, when she was 33 years old, my fiancée came down with acute meningitis. That morning she was coming up the stairs to take a shower and she told me, “My side is hurting. I’m going to lay down.” I kissed her and went to work, and that’s the last time I saw her.

When my fiancée died, the police came to the house. Young lady dies suddenly, naturally the police come out. Honestly, it was a mob scene out there. My fiancée’s mother was telling people, “He killed my daughter.”

While I was outside talking to the police, she said, “I want to take the kids home for a while.” I said fine, and she took my son and my fiancée’s two older children, who have a different father. Then she didn’t return my calls or let me see my son. I had to find out from other people that she had petitioned the court for custody. Because I was not listed as my son’s legal father, I didn’t have any rights.

It took about three weeks to get a court date. It drove me crazy. I talked to friends and I cried a lot. My son was gone and my fiancée was dead? It didn’t make sense. Her stuff was still there, her rings were on the dresser. I almost felt like, “Maybe it was just a dream.”

Finally, I was able to go down to the court and challenge my fiancée’s mother. I felt that she just wanted custody so she could get financial support for the children.

But because I wasn’t legally registered as my son’s father, I was told, “You’re just the alleged father.”

I was frustrated and confused, even furious. It’s not like my fiancée had Anna Nicole Smith’s money! Besides, my son and I look so much alike, and we had lived together since his birth. But I had no rights to him. Legally, he belonged to his next of kin.

The judge respected me. He asked me, “Dad, who do you want to have custody?”

I knew that my fiancée’s sister would allow me to spend time with my son, so I asked that she get temporary custody, which was granted. Then I started the long and confusing process of establishing that my son belonged to me. That process took 2 ½ years.

‘You Can Walk Away’

That day, the judge told me to go to the office that handled child support. But when I got there and told the lady I needed a paternity test, she didn’t understand my problem. She was used to dealing with men taking paternity tests because their children’s mothers were trying to get child support from them. She looked up my name and told me, “You got no case. Your name ain’t on file. You’re free. You can walk away.”

She said, “The mother has to say you’re the father. The judge has to order it.”

“Well, she never made a complaint on you.”

There didn’t seem to be a process for a father seeking to get a DNA test. I did not know what to do next.

A Year in Limbo

Luckily, a few weeks later, my fiancée’s sister went to get food stamps assistance for my son. That got the court involved in coming after me for child support. A bailiff even came to my house assuming that I would want to deny paternity. But my son was there with me, and I told him, “I am trying to get custody!”

When I finally got the DNA test, of course it said it was 99% likely that I was his father.

By now, a whole year had passed. During that time, my fiancée’s sister let my son be with me most of the time. I would have him for weeks and months on end.

But it wasn’t the same as having custody. His auntie had to take him to the doctors, and she made the medical decisions.

She also had five other kids over there, and he wasn’t getting the attention he needed there. If he went to her house for the weekend, he would come home to me like a little tumbleweed—dirty shoes, or no socks on. I didn’t like him going over there.

Also, what I didn’t know was that she was collecting social security for him. He was living most of the time with me so I was buying his clothes, diapers and milk, and she never gave me a dime of the money she got for him. When I found that out, it was nerve-wracking. But she was committed to him, too. She would tell me, “All I got left of his mama is him.”

‘You Need a Lawyer’

Once I finally got my DNA results, I filed a petition and went back to court. I told the judge, “I’m his father and I want custody of my son.”

Again, it wasn’t that simple. The judge said, “You’ve got to have an order of paternity. And I can’t order it. You’ve got to go to another judge.” It was confusing. “You need a lawyer,” he said. He knew I was a man on a mission so he added, “I’ve got somebody to help you.” The judge sent me to the Detroit Center for Family Advocacy. I felt lost, but that’s when my situation started to turn around.

My son and I went together to the lawyer’s office for an interview. They had a box of toys and my son had them everywhere. He was tearing the office up. I was so apologetic but he must have charmed them. It didn’t bother them.

Then, at the end of the meeting, they told me, “We’re going to do this for free.” I was shocked and relieved. My God, all I had to do was pay the fees to file the papers.

Once DCFA took the case, they filed all the papers and took care of everything. They also kept me calm. They really did. So much time had passed that I often thought, “I’m never going to get my son!” The judge’s calendar was booked up for months but they kept telling me, “We’re going to beat this case.” I don’t think I ever could have done it by myself.

With their help, I went back to my judge, who granted me temporary guardianship. Finally, my son was home with me all the time, and I could make all the decisions in his life. Still, the court would send out a social worker to check us out. If for some reason I wasn’t right, they could take him and put him back with his auntie.

Finally, the court date arrived for me to get custody. My son and I dressed up and went to court together. When we got there, the bailiff said no kids allowed in court. But my lawyer spoke to the judge, and we came in together. The hearing was no more than five minutes! After all of that waiting. But at the end of those five minutes, the judge granted me my son.

We called family to tell them the good news. Then we went down to the river to take pictures.

Now my son is about to turn 5. He loves trucks and cars, playing on computers, being outside, digging holes and getting into stuff he isn’t supposed to.

My son also tries to mimic everything I do. He even shaved his eyebrows off with my razor. (I bought him his own fake razor kit after that.)

A Stroke of the Pen

Seriously, though, I hope no other fathers have to go through what I went through to get my son.

A lot of men don’t realize what it means to have your name on the birth certificate. Just failing to make that stroke of a pen messed me up.

I also hope the court process can be made a little more personal. It’s not easy to understand the court system. We really need counselors in the courts that show people they care and help them out.

I was lucky to find help from an organization that works to keep families together. Just last month, they helped me put in the papers to change my son’s last name to Barbee. When I changed his name, I did keep James in it. His mother picked that. I’m just getting myself on there, too.