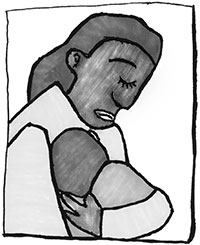 White and Black people in this country have similar rates of illegal drug use, but research shows that Black parents come to the attention of the child welfare system for drug use at far higher rates. One 1990 Florida study found that doctors were 10 times more likely to report Black women for drug use during pregnancy than White women. A more recent study, conducted between 2001 and 2007 in California, found that Black women were four times more likely to be reported.

After I stopped using drugs, I thought that all pregnant women should be drug tested so they could be forced to get help when needed. But now I know that once Black parents are reported to child welfare, they are more likely than White parents to have their children removed, even when cases are similar.

Many parents want to get help with addiction but are afraid to ask for help because they don’t want their children to be removed. In some states, pregnant mothers can even be prosecuted for child abuse for using drugs. Some of my friends don’t get prenatal care because they’re afraid of drug testing.

So what can parents do to deal with drug use while keeping their kids out of foster care? Rise interviewed Chris Gottlieb, co-director of New York University’s Family Defense Clinic, about the role race plays in drug-related child welfare cases and what parents can do to get help.

Q: Why do Black parents come to the attention of the child welfare system for drug use more often than White parents?

Gottlieb: One reason is because parents of color tend to have more contact with public agencies where mandated reporters work, so all their actions are more closely monitored, including drug use. If you interact more with mandated reporters, you are more likely to be reported to the child welfare system.

In 2011, The New York Times ran an article entitled “No Cause for Marijuana Case But Enough for Child Neglect.” That article highlighted that in New York City the possession of very small amounts of marijuana was being used as the basis of extremely aggressive interventions by the child welfare system, including removals. The article pointed out that while marijuana use among Whites is twice as high as among Blacks and Hispanics in the city, these cases were rarely if ever filed against White parents.

Black parents also come to the attention of the child welfare system more often because they use public hospitals more, and many public hospitals drug test women giving birth without their knowledge or permission. I handle some of these cases personally and I’m in touch with advocates all over the city who handle them, and we see very clearly that moms of color are drug tested during labor and delivery vastly more often than White mothers.

Legally, and I think also morally, the only time it’s all right to perform any medical procedure on a patient without permission, including a drug test, is in those rare emergency situations when a person is not capable of giving permission and information from the test is critical to treatment. Labor and delivery is not usually one of those situations.

Parents should know that, if you are asked for your consent to a drug test, you can say no. You also can ask, “Is there a medical reason for the test?” But it’s possible that if a poor Black parent says no to a drug test, even that might be called in. This is where parents and advocates have to address the problem systemically.

It’s important that we address this issue systematically to stop illegal testing because if a drug test is done without your consent, you can’t ask a family court judge to keep that piece of evidence out of court. In a criminal case, if evidence is collected illegally, it’s kept out of court, but in family court, even if the law was broken gathering evidence, it can be used in court.

One positive change in New York City is that the Health and Hospitals Corporation here has issued a new policy that public hospitals are not supposed to drug test unless there is a medical reason for it and the patient consented. Hopefully hospitals here and around the country will start to follow that policy.

Q: What is your opinion of the effect that drug testing has on pregnant women and women of color?

In addition, I think sometimes drug testing has negative effects because when child welfare gets involved, even when the only allegation is drug use, caseworkers are not always asking, “What would be helpful to you?” They’re intrusive, coming at random times and opening all the cabinets. It’s bad for kids to watch people treat their parent disrespectfully.

Q: What can parents of color do to keep themselves and their children safe?

Gottlieb: It’s difficult to talk about this in a general way. If you are pregnant and using drugs, you should know that receiving good prenatal care is one of the best ways to reduce possible risks to your baby. You will have to decide whether to tell your prenatal care provider about your drug use and whether to seek drug treatment.

It’s important to understand that prenatal care providers and treatment providers are mandated reporters and different providers report different things. If you are pregnant and think you could benefit from drug treatment, ask around in your community to find out what providers other pregnant women struggling with substance abuse problems have found supportive. Try to find providers you feel comfortable with.

If you already have children, you should ask yourself if your drug use is preventing you from meeting your child’s basic needs, being there for your child emotionally, or making sure that they’re always being safely cared for. People sometimes make decisions when they’re using that they wouldn’t make otherwise, such as leaving a child with someone they barely know. If you are not caring for your children the way you want to because of your drug use, you should get help to beat your drug problem.

Unfortunately, the reality is that, even if your child is placed in foster care, you will often have to find your own program, either through a social worker who works with your lawyer, online, or in the library. Be proactive in finding the kind of treatment that you think you need, whether that’s inpatient or outpatient, mother-child, etc.

If you believe you are providing adequate care to your child, you and your lawyer should shift the focus from the drug use itself to what effect the drug use has had on the child.  Most judges are never going to say it’s OK to keep using drugs, and many caseworkers only care about clean tests. But the law is very clear: Professionals in child welfare are not supposed to look at parents and decide whether they’re making the decisions the professional would make or even whether they’ve broken the law. We’re only supposed to intervene if a child has been harmed or is at serious risk of harm. That is why it’s important to get professionals in your life—your therapist, your child’s therapist, teachers, or clergy—to let people know that your child is thriving.

Q: What drug-related policies do you think parents and professionals should advocate for?

Gottlieb: Advocates can work to shift the overall approach of the child welfare system from being one of judgment and punishment to being about providing meaningful help to families. That includes fighting for more funding for high-quality drug treatment. In addition, all parents who want their children to stay with them while they are getting treatment should be able to. There are high-quality home-based interventions that have been proven safe. I believe that would be better for parents of color and for all parents.

One thing that should give us hope is the progress we’re starting to see in the criminal justice arena outside of child welfare. For example, in New York City a lot of people have come to see that minorities are prosecuted more for marijuana possession use even though White people use it more often. The city has acknowledged that this is unfair and needs to change.

No one is a perfect parent. I’m hopeful that we can get to a point where parents are not prosecuted in family court for things a White or more affluent family would not be prosecuted for. People are realizing that the war on drugs did a lot of harm and that none of us should tolerate a system that treats Black people differently than White people. We don’t yet get nearly as much attention to these issues in the child welfare system, but we should, and I believe we will.