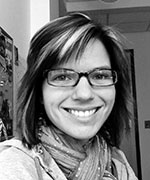 I’m the editor of CW360º, a publication of the Center for Advanced Studies in Child Welfare at the University of Minnesota that provides a comprehensive view of a prevalent child welfare topic in each issue.

I use Google alerts to keep up to date on what’s going on in child welfare and I came across Rise in 2012. I was pretty impressed—I appreciate being able to read the parents’ perspective.

The honesty is remarkable. Being a born and bred Minnesotan, I’m used to keeping everything to myself and not sharing feelings and emotions. I appreciate the ability of the writers to look at their situations and have such a deep understanding of what they’ve gone through and where they’re going next.

I’m also a parent of two little boys and it’s interesting for me to see that some of our experiences are similar. I was still a relatively new mom, pregnant with my second child, when I read the issues on parents with mental illness and facing termination of parental rights. I just could not imagine going through that and I empathized so much with the writers. That had the most profound impact on me.

One story that really struck a chord was Erica Harrigan-Orr’s article, Ghosts in the Nursery. There was one moment when she wondered whether her kids would be better off without her. She wanted her kids to have a better life than she had growing up, and she wasn’t sure she could provide that, even though she was trying to do right by her children. It’s very sad to think of a parent believing her kids might be better off without her. But Erica was able to recognize that her kids needed her and that she could heal.

I reached out to Rise to find out if we could reprint Erica’s article. Since then, we’ve also reprinted an article by Carla Burks, about struggling with a child with mental health problems. Our next issue is on culturally responsive child welfare practice, and we’ll use a story from Rise’s issue Facing Race in Child Welfare. The perspectives section, which includes Rise’s stories, is our most highly rated section.

I also try to promote Rise stories on Twitter and Facebook. I think it’s crucial for people to hear parents’ perspectives. Rise stories have helped me to expand my worldview and perceptions, and to see how people might react in different ways to the same situation within child welfare. For the child welfare workforce, especially, it’s important to understand another side of the story.