When the child welfare system enters your life, there are already so many assumptions that you don’t have strengths as a parent. When you’re also disabled, often your limits are all an 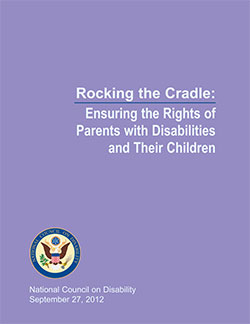 Here, Robyn Powell, attorney advisor to the National Council on Disability (NCD), discusses how bias affects parents with disabilities, how parents can fight bias, and the impact of the report.

Q: How does bias impact parents with disabilities when they come to the attention of the child welfare system?

Part of the problem is lack of knowledge. We’ve heard repeatedly from people who work in child welfare that they don’t receive any training on disabilities. People making the decisions come in with their own perceptions, and those perceptions are often enough to decide that parents with disabilities can’t take care of their children.

For people with a physical disability, there’s often an assumption that these parents can’t take care of themselves independently, so how could they take care of child? People in child welfare don’t know about adaptive parenting equipment—equipment that allows parents with a physical disability to do things they might otherwise be unable to do, like pick a child up. They don’t know that a parent may be able to use a personal assistant or have people around them to do certain physical aspects of childcare. They often believe parents have to be able to do everything independently in order to be competent parents.

There is even more bias when it comes to parents with psychiatric disabilities.

Moreover, when we look at the assessments done with people with psychiatric disabilities, they are usually very one-size-fits-all, done in quick meetings with parents in the courthouse. But when parents have a psychiatric disability, their issues can be exacerbated just by being in court. Feeling angry, overwhelmed, worried and sad about their child’s removal can lead parents to be given inaccurate diagnoses. All this makes it more likely that these parents lose custody of their children.

People with intellectual disabilities may need individualized trainings to address specific deficiencies, such as if a parent can’t cook, or has trouble keeping up with the child’s hygiene, or if money management is a challenge. Children of intellectually disabled parents often benefit from early childhood intervention services.

Q: You had so many heartbreaking stories in your report. Can you share one that illustrates the kind of bias parents with disabilities face?

A: In researching our report we talked to a woman named Jean. She was a young mother with an intellectual disability living in a supportive living program in Florida with her 5-year-old daughter. On the basis of Jean’s disability, she had been assigned a social worker and had had an open child welfare case since her daughter was born. Jean received parent-child intervention services and things were going pretty well.

But when her daughter started kindergarten, people began to ask how she could promote her child’s well-being as her daughter advanced in school. They assessed Jean with IQ testing, interviewing and very limited observation, and they concluded that by middle school, Jean would be unable to help her daughter with homework, and that she might have trouble retaining any parental authority over her daughter.

After a number of visits, however, Jean told the social workers she didn’t want her daughter visiting any longer. She said her daughter was scared to go, had become fearful of sleeping, and was wetting herself after being potty trained for years.

The social workers continued to insist that the daughter spend time with her father, until finally, after one visit, Jean observed evidence of sexual abuse. She contacted the police and the social workers, and eventually the father was sent to jail for the abuse.

Afterward, Jean’s attorney was able to have the case closed. But Jean was so scared that she fled the area with her daughter and no one has heard from her since. This is just one story that really shows how detrimental it can be when child welfare assumes that a parent is unfit because she has a disability.

Q: What advice do you have for parents with disabilities that have been affected by the child welfare system?

A: I would encourage parents to get their own evaluations by someone who has expertise in what a person with a disability really needs to parent effectively. Through the Looking Glass is a national organization that can help you find advocates or evaluators in your area who are skilled at working with people with disabilities.

A lot of times, parents are resistant to being labelled “disabled” because there is such bias out there. That’s understandable, because we know a parent’s disability is sometimes used against them.

At the same time, it’s important for parents to know that having a disability can also help your case. You and your lawyer can raise the Americans with Disabilities Act. You can say you would like a new assessment because you weren’t provided with appropriate accommodations, or you can say you are not being given the proper supports to help you parent given your disability.

For instance, a lot of people with a physical disability use a personal assistance service to complete every day activities. But most government-funded personal assistant services will not cover assistance with parenting. We are working to change that. We believe that if the definition of appropriate services included parenting services that would really broaden the ability of parents with disabilities to take care of their children.

We also believe all courts should be in compliance with the American Psychological Association’s guidelines when it comes to assessments. Assessments should be based on observations of parents in their homes and communities. We also think the courts should prohibit use of speculation—such as the assumption that all parents with a certain disability can’t parent their children. We would like courts to look at the actual person and how he or she is parenting, as well as what supports could be put in place to help that person parent better.