From the first day that the child welfare system came into my life, I felt confused, afraid to ask for help and alone, with no one to guide or support me. My case began five years ago. I got a call from Chil 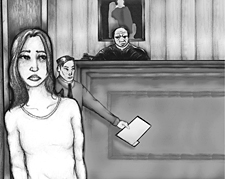 d Protective Services (CPS) in Detroit, asking me to come to a Team Decision Making meeting and to bring my five kids with me.

At the meeting, the CPS workers told me that my husband had been accused of child abuse and charged with battery for abusing me. This meeting was to determine whether I’d failed to protect my children because their father had harmed them and they had witnessed domestic violence. Sitting at the table with the CPS worker, her supervisor and a meeting facilitator, I felt very intimidated. I had no lawyer or advocate to explain what was going on.

I was interviewed for two long hours about my life history, my kids and my marriage. I felt like I was on trial. I believed that the meeting was my only opportunity to get away from my husband’s abuse, so I told the workers everything that had been going on in our family for the past two years.

I explained that I didn’t leave my husband despite his violence because I had no family support and nowhere to run. Besides, abuse was normal in my childhood. I witnessed abuse and more abuse. I was always told, “Cover up the bruises and keep walking, and don’t tell anyone.”

I thought that my husband would end up in jail and my life with my children would return to normal. But I think being honest only made my situation worse. In the end, they charged me with “failure to protect” and placed my children in foster care.

After the meeting, my children were separated from me and from one another and placed in four different foster homes. I tried my best to make my children feel comfortable, but I will never forget the moment that I had to tell my oldest, “You have to stay with the nice lady and Mommy has to go somewhere else.” It was two weeks before her 6th birthday. She begged me not to go. But she already knew the reason why. She asked, “Is it because I told the lady that came to my school about Daddy?”

CPS told me I had to move to a shelter immediately. I also had to call my boss and tell him that I was quitting so that my husband couldn’t find me at work. The worker drove me to my new home, a shelter in a city an hour away.

My first night at the shelter I felt like a little kid hiding in the closet again. In one day I had lost everything that mattered to me—my children, my job as a supervisor, my home and my dignity.

The first court hearing was a blur. I met my attorney a few minutes before it started. He told me that the best thing to do was to admit to all the allegations. He said this would help me get the kids back sooner. So I did that, but later I came to believe that it only hurt my case.

After three weeks, the CPS worker gave me a copy of my treatment plan and asked me to sign it. It said I had to go to parenting classes, therapy and family therapy and find employment and housing.

But it was difficult finding services in a new place where I couldn’t even find the McDonald’s. Everyone kept saying, “You’re not a resident so we can’t help.” I was too afraid of messing up my case to contact my attorney or worker and ask for help.

After a few months, I decided that it was impossible for me to start from scratch and I moved in with a friend in Detroit. I went to my old job and explained what had happened and begged for a job. I also obtained a part-time position as a housekeeper, enrolled in a G.E.D program, and enrolled in therapy at a community mental health program.

I was so afraid of what my CPS worker would say once she found out that I had moved back to Detroit. I thought she would take it as a challenge and I would never see my kids again. But to my surprise, she was OK with it and even gave me a referral to a parenting class.

Afraid to Speak Up

After that, I thought my kids would come home. At every court date, I expected my children to be released to me. Finally I asked my attorney why they were still in foster care and he explained that I had to complete my treatment plan before the court would consider reunification.

My attorney was friendly and nice, and I thought he was a good lawyer because he took the time to answer some of my calls and meet with me before each hearing. But now I see that he did not help me understand my situation. I never knew what to expect from the next court hearing or why we kept returning to court. He also did not challenge the court or the child welfare agency in any way.

At times I wanted to speak up in court. My children told me that they were being abused in foster care, and I wanted the agency to move them to a new foster home. But I didn’t dare to ask too many questions. I didn’t want to make my case more complicated and I was intimidated by the referee, which is like a judge. My lawyer seemed intimidated, too. He stayed quiet in court.

After my children had been in care for 16 months, I completed my service plan. At around the same time, I was assigned a new worker who became my advocate. She had my children placed with new foster parents that fell in love with my family and wanted to see us together again. Finally, my children came home. We were so happy to be together again.

Now my kids are doing great. One daughter is planning a trip to Nicaragua to help build a school. Another is part of a college preparatory program. My boys are doing well in school and talk all the time about how they want to become police officers. And my little one—well, that child thinks she runs the house.

Even so, I believe my children should not have had to go through a painful year of separation. My attorney could have been much more aggressive in pushing the court to return my children to me. Or, if I’d had an attorney at the Team Decision-Making meeting, I could have gotten preventive services instead of having my children removed.

After I reunified with my children, I was able to become a Parent Partner, providing other parents with emotional support, resources and guidance. Now that I work with other parents, I’m sometimes thankful for my attorney, even though I believe he could have done so much more to communicate with me and teach me my rights.

One mom I worked with had an attorney who talked down to her. In the waiting room at the courthouse, he made comments about how bad she smelled and asked, “Do you even know how to read?” He seemed surprised when the parent asked for a new attorney.

Another parent had an attorney who never believed anything she said. This mother’s children were placed in kinship care and the aunt wanted to adopt the children, so every time we went to court, the aunt had a horror story to tell about the mother. The attorney would not ask if the horror stories were true. She’d just say, “Why would you do that? You’re not getting your daughters back.” That mom almost had her rights terminated until she asked to have a new attorney assigned to her case.

I’ve also seen the kind of progress parents can make with a strong attorney. One dad had an attorney who made sure that the father understood his rights and that services were provided to him in Spanish.

The attorney always called the father a few days before the court hearing to review his progress and ask if he had questions. After court, she explained what steps to take next and encouraged him to call her if he had questions or concerns. It was wonderful to see how this attorney advocated for her client.

Now I am a Parent Advocate at the Detroit Center for Family Advocacy. Our mission is to reduce the number of children in foster care by providing legal assistance, support and resources to families.

Each family has a team—an attorney, a social worker and myself, the parent advocate. Together we help parents identify their needs, set goals and find support in their communities. We work with families to solve legal issues that put their children at risk of entering foster care or staying in the system. I see the difference it can make when families have a strong legal team in their corner. Children really do come home faster when families get the help they need.