My mother grew up in South Carolina with about 11 siblings, maybe more. When I was a child, she’d tell me about her mother’s heartache; 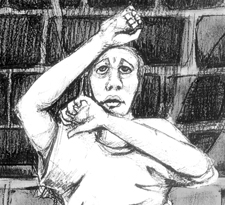 she had to bury four of her sons. But the stories that really rattled me were the ones about the abuse her mother took from her dad.

“He used to beat her,” she’d say as a matter of fact. No emotion, no sorrow. No anger or judgment. Just as plain as if she were remarking on the weather outside. “’Specially when he was drunk. He would beat her, then he would beat on us.” Not once did she say that my grandmother fought back. As far as I could tell, my grandmother took her lumps like a loyal dog.

My mother was not going to let a man hurt or control her. She had a lot of advice for me about how to protect myself, too. Some of her best were:

• “You have to keep an ace in the hole.” Even if you have a man—even if that man is good to you—you should never fully trust him. Always have another man in the background ready to take his place.

• “Always have your name on the lease.” If you don’t, you’re a fool, ’cause someday he can and will throw you out.

• “Beware the cleanup woman.” There is always a woman out there looking to steal your man. She will out-cook you, out-clean you, and outsmart you just to steal him from you. So don’t keep women friends.

My mom didn’t trust any man, or any woman for that matter. But by the mid-1980’s, she had given birth to six children and she lived with my stepfather, two of my siblings and me. Three of my siblings lived with relatives down south.

It was an amazingly terrible thing to grow up in my home. Almost every day my mother and stepfather would fight. If it wasn’t about us kids, it was about money, or my mother accusing my stepfather of being unfaithful, or of drinking too much, which he did, or that he never took her out for a night on the town. In the end, it didn’t matter what it was about. They would always manage to be in each other’s faces, shouting: “You’re a triflin’ man.” “You’re no good, woman, I should have left you when I had the chance.”

Each retort would lead to a more hurtful comeback until it came to slaps and blows and tussles. Knocking each other into walls and mirrors. In the bedroom, in the living room, in the kitchen, out in the hall.

The cops would be called and they’d tell my stepfather to take a walk. My mom would threaten not to let him in the house again. He’d drink some more and pound on our door all night until she let him back in.

Things would cool down for a while. A few days, a week, no more than a month. Then it would start up again. Every time—the same thing—for more than 20 years

I used to think that it was all my stepfather’s fault. I was taught that real men don’t hit women, so I ignored just how complicated their relationship was.

Then one day, when I was in my teens, I was complaining to my sister about all the fighting. She said, “You know, Nicole, Mom usually hits first.” Her words were like a bucket of cold water in my face. All of the moments I had seen my mom hit my stepdad jerked back into my memory. Once she slammed the front door on his hand and cut off his pinky. Other times she threw things at him and laughed at his pain.

My memories made me rethink their relationship. I’m not condoning my stepfather’s violence. But I know for certain that he wasn’t the only guilty party.

It’s strange—I think back and wonder: Did my mother’s aggression protect her or did that place inside her that declared “not me, not ever” cause their relationship to go bad in the first place? Did my mother’s violent family history leave her in a constant state of flight or fight? Could there have been another way?
When I was younger, I saw my mother’s aggression as a sign of strength. She wasn’t going to let any man back her into a corner. But now I think that my mother’s undeniable need to control and manipulate everything and everyone around her, including her children, was a sign of her insecurity.

The more I examine it, the more I am able to find a way toward understanding and forgiveness, for them and for myself. I have made a lot of mistakes of my own when it comes to choosing a partner. I have a lot of trust issues. I rarely trust anybody. Right now I find it easier to live my life and raise my daughter alone. But through counseling and through my own attempts at understanding, I’m hopeful that I can find another way. I will not place myself in the hole that my mother or grandmother were in. Not me, not ever.