On Dec. 22, I saw my neighbor’s son being stopped and frisked by the police. In New York City, police stop and frisk hundreds of thousands of young men of color in poor communities. Of the 686,000 stop-and- 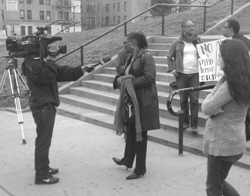 frisks last year, 84 percent were of blacks and Latinos. I have five sons, and my sons have been stopped and frisked so many times.

That December day, I asked the police, “What’s going on? This is a good kid. Why do you have him against a wall?” I added, “Stop and frisk is racial!” Next thing I knew, I was on the ground, being arrested.

After my arrest I thought, “I need to organize around this so that other people won’t experience what I’ve been through.”

A Parent, An Advocate

My journey as an advocate started four years ago when I was released from prison and reunited with my sons. I had dealt with child welfare cases and the justice system for many years and I wanted to make a difference in the lives of families.

My last child welfare case was in 2006. I was a substance abuse counselor but I’d relapsed and I went to jail. I left my sons with my daughter, who was 21. She was overwhelmed and reached out to the city child welfare system (ACS) for help. It was strange because ACS took me to court for neglect but ultimately made the same decision I had—they gave guardianship to my daughter. I came back home after only six months, but it wasn’t until 2008 that my sons were finally returned to me.

When I got my sons home, I didn’t want to see other families floundering. I wanted to be a leader who helped families navigate the system. So I got involved with the Correctional Association of New York and joined the Parent Leadership Curriculum at the Child Welfare Organizing Project (CWOP).

After my arrest, I went to those two organizations with the idea to organize a rally on my court date, March 22. I wanted to send the message that kids are being targeted and that folks need to get involved if they see kids in their community up against a wall.

That day, about 100 people came out. I told my story and we had signs saying “Stop and Frisk is Illegal” and “Stop Targeting Our Children.” Since then, I’ve spoken at a number of rallies and marches. I’ve seen that thousands of New Yorkers have joined together to stop stop-and-frisk. I am very hopeful that this policy will change.

I hope these protests are showing my sons that they can have a voice. Recently I brought home t-shirts that say, “I do not consent to this search.” My sons were ecstatic. They can say at protests and with their shirts what they’re afraid to say on the street.

There is so much that parents can do to make change in our communities. In the spring, I spoke at a community forum that CWOP helped organize to “raise the age” of criminal responsibility in New York from 16 to 18. In nearly all other states, teenagers who are 16 and 17 are treated as juveniles when they’re arrested, unless it’s for a very serious crime. In New York state, teens 16 and 17 are treated as adults and families are left out of the court process.

Not long ago, it hit me in my gut how important it is that children’s lives shouldn’t be ruined by one instance. That day I got a phone call: “The police have your son.” I went up the street and saw my son sitting on the sidewalk, handcuffed. The police said to me, “We can’t talk to you about this.” I said, “That’s my son and he’s a minor.” The officer told me, “No, he’s 16 years old. We treat him as an adult.”

Young people need to have a chance to grow up in their communities without living in a war zone. When I walk into my sons’ schools, I have to put my bags through the metal detectors. If I set off the alarm, someone comes with a metal wand and scans my body. I feel like I’m walking into a prison. I ask myself, “What are they preparing our children for?”

And we know what the numbers look like for blacks and Latino children that enter the child welfare system. Our children enter foster care at a higher rate–an alarming rate–and stay in care longer than their white counterparts.

The message I have for parents is: Don’t give up! Get involved! Now I’m a member of a coalition called Undoing Racism in Child Welfare and I’m on CWOP’s board.

One initiative that’s exciting to me is CWOP’s Community Representative project. In many New York City neighborhoods, trained Community Reps attend conferences where the decision is made whether to remove a child from home. Their role is to support parents during the conferences. In East Harlem, CWOP trains the Community Reps and they are all parents with first-hand experience with child welfare.

So often when you’re in need, people are talking at you and telling you what you should do. There’s a different spin on things when another parent is at the table advising families and offering support.

We’ve seen that, in East Harlem, children are far less likely to enter foster care than in a similar communities without CWOP’s Community Reps. Wow! I know that, through my advocacy, I’m already making a difference.