I was 2 years old when I got adopted, and 7 when my biological mom stopped visiting me with no explanation. Even though those changes 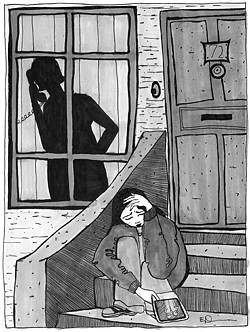 happened when I was so young, I think they’ve affected me to this day.

For years I wanted to find my biological mother. I used to cry just thinking of her at night. I missed her so much. As I got older, I wanted to live with her and be close. I used to think about her every day. I always wondered if she loved me, and why she didn’t stick by my side.

Do My Moms Love Me?

I also never felt 100 percent sure of my adoptive mom’s love. When we argued, I thought she might leave me. I really wanted both of my moms to prove their love to me.

But when I started to act up as a teenager, they proved me wrong instead. They proved that they had an easy way of giving up on me. And that hurt.

Trouble started with my adoptive mom when I was 13 years old. We went to Puerto Rico on vacation. I enjoyed hanging out with my friends, mostly older guys and a couple of girls. But then rumors spread about me having sex with different guys.

The rumor got to my mother and she believed it. I felt mad and upset. How could she believe that? Every time I tried to explain that those guys were just friends, she wouldn’t listen.

I was so hurt that she wouldn’t listen to what I said that after a few days I gave up on trying to get her to believe me. I felt like she gave up on me, and because I never felt sure of her love, I took it really hard. I thought she was just another mother rejecting me.

After that, I started coming home late every day. I guess I wanted to test my mother’s love. But she just got mad and threatened to call the cops. The way she treated me made me hate her.

Even after we got back to New York, I felt angry. I tried to deal with my anger by finding someone else to love me. In the winter, I met this guy I really liked and I started cutting school, drinking, smoking weed and cigarettes, hanging out with gang members and going to parties. I knew it was wrong, but I still followed him everywhere he went and came home really late, like at 12, 1 and 2 in the morning.

My relationship with my adoptive mom got rough. She wanted me home after school every day. I said that I hated being stuck at home and that my friends could do what they wanted, so why couldn’t I? She’d say that she was the adult and I’m the child and I had to listen to her for my own good.

Then one night I came home at about 12:30. My adoptive mother didn’t let me in the house. I overheard her talking on the phone, telling the police what was going on. I wanted to run away, but I had nowhere to go. So I stayed in the hallway feeling scared and wondering, “What will the cops do to me?” Fifteen minutes later they were knocking on my mother’s door with me standing beside them.

My adoptive mother explained that she couldn’t have me coming home late because she was getting too old for it. I felt sad for her and I understood why she thought I was too much to handle. But I also hated her for giving up on me.

Back in the System

The cops told me to get a sweater. Next thing I knew I was in handcuffs, heading out to their car. They took me to ACS. I was scared.

The next morning I went to court. The judge asked me what I was doing wrong. I told her I was coming home late, drinking, smoking, disobeying my mom and hanging around with different people. The judge didn’t ask why I was doing these things and I didn’t tell her. (If she did ask, I don’t think I would’ve trusted her anyway.) She just put me in the system. ACS escorted me out of the building and I went to a group home in the Bronx.

Going into the system felt really bad. I wanted to be in my adoptive mother’s house. I got homesick and thought, “Oh my god, I’m stuck here. I’m never going home.”

At first I felt guilty, because I knew I messed up. But then I started to get upset. My adoptive mom didn’t call me. When I visited her, she acted joyful and happy to see me, but she didn’t say anything about what happened between us. I wanted her to say, “I’m sorry.” When she didn’t, I felt she betrayed me. I told myself, “It’s OK. I don’t care. I’ll get over it.” I didn’t tell her how I felt, because I felt sure that she didn’t care.

I was only at the group home for a month before I gave up staying there. I started AWOLing to my boyfriend’s house. Then his family got tired of me being there every day, so my boyfriend and I stayed in the streets for a while.

It was a rough time being in the streets. I felt dirty, nasty, poor and like a bum. It hurt me very much to be kicked out of my biological family, my adoptive family and his family. I also felt bad that I stopped going to school. I never thought I would live in the streets and stop going to school.

After a while, I decided to find my biological mother because I thought she could get me out of the system and I wanted to get to know her. When I was younger, my adoptive mom had a picture of my bio-mom and my father and she would show it to me when I asked to see it. I still remembered that picture. I wanted to know everything about her. I wanted her to prove that she loved me after all.

I asked my adopted mother for my biological mother’s old address.
She understood that I wanted to learn more about my biological mom, so she gave it to me and said, “Good luck finding her.”

I was nervous, though, because I feared she wasn’t going to want to know me. I thought she might still be on drugs and prostituting, and that she would deny having me. Luckily, that’s not how it went.

When I finally found her I cried and cried. So did she. They were happy tears because that was the first time in seven years that I got to hold her in my arms.

I thought my bio-mom was nice, funny, beautiful, confident and determined. We looked a lot alike and seemed similar in our mentality: we go for what we want and if we can’t get it at first we still try.

I moved in with her and we went to the movies together and talked about when I was a baby, before her drug use made me end up in care. We traveled to see all of our family together. I felt like I’d come home. I loved starting to understand who she is and why she couldn’t take care of me when I was little. Finding that out from her was a relief. And when she told me she couldn’t get me out of the system because her rights to me were terminated, I cried.

I got used to being with her and her boyfriend so much that I started calling her “Mom” and her boyfriend my stepfather. I thought I finally had everything I wanted, but things didn’t stay that way for long. A couple months after I found her, my biological mother found a new boyfriend and broke up with my stepfather, who I felt close to. That was very upsetting.

She Kicked Me Out

Then my mom and I had a fight because her new boyfriend took his attitude out on her and I hated it. So I told my biological mother I didn’t like it. She told me to mind my business. I got mad and pushed her. She pushed me back and I fell on my bed. I got so mad I punched her. We fought.

That night my biological mother decided to throw me out. She told me I had to go in the morning and take all my stuff with me. I said that was no problem. The next day, I packed my stuff and left.

I felt so confused and angry that day. It felt weird fighting my own mother. And I felt guilty, like I had messed up because I didn’t listen to her.

I also felt like my bio-mom let me down, though, because she threw me out for her boyfriend. That hurt me a lot.

When I think about my bio-mom now, a lot of stuff scrambles through my mind, but I can’t get my thoughts to settle down so I can figure out where things went wrong between us.

Now I’m in a residential treatment program, and even though I’m separated from everyone I care about, I do still talk to my biological and adoptive mothers and see them sometimes. My adoptive mom shows me she cares by coming to some meetings or court dates. Sometimes we strike up a conversation.

I love and will always have a lot of love for my adoptive mother. I’d like to tell her my side of the story: that I felt hurt that she believed the rumors about me, but I didn’t want to leave her home. I’d also like to give her a hug and tell her “I love you” and for us to talk more often.

My biological mom also tells me “I love you” and sometimes visits or talks to me on the phone. I’m happy that she’s back in my life. I’d like to tell her that I love her and I understand all the things she has been through, because I think I do now. I hope that she can forget about the past and move on so we can be close.

But right now I don’t feel ready to tell my two moms that I love them. I feel scared to do that. Maybe I still don’t trust that they love me back. I hope that my mothers will stay in touch with me and show me that I can trust them. Then maybe I’ll be able to let them know that how I acted didn’t always show what I really feel.