New York City teens convicted of crimes have usually been sent to facilities upstate, far from their families. Now an initiative called Close 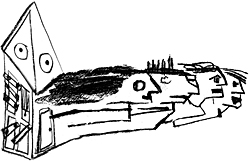 to Home will change that—these teens will receive services at home or go to city residences where they can stay more connected to their families and communities. Reverend Emma Jordan-Simpson, executive director of the Children’s Defense Fund of New York and chair of the Office of Children and Families Brooklyn for Brooklyn Community Advisory Board, explains the reform:

A: The majority of youth locked up in New York state come from the five boroughs of New York City but we were housing them at a great distance from their families. There was even a state-operated juvenile facility on the Canadian border. When you’re asking family members to make the trek to the Canadian border, you know what the outcome is going to be. The child is going to lose that family connection.

“Close to Home” is not only about keeping young people physically close to their homes. These programs will focus on positive youth development and strengthening families rather than punishment.

Young people have different impulse controls than adults. When young people fall off track, our rescue should be humane. We don’t want a 14-year-old’s impulsive decision to steal someone’s iPhone, or to smoke marijuana to affect him for the rest of his life.

In the last few years, New York City and other big counties have been investing heavily in alternatives-to-incarceration programs that offer services like therapy and family therapy and a focus on getting young people back on track in school and meaningfully employed. Up to 80 percent of New York youth who go through these programs complete them.

Keeping young people closer to home means they can stay in closer contact with their families and communities. It also means easier coordination among city agencies, like the Department of Education, NYC Children’s Services (ACS), and all the agencies that touch these young people’s lives, so there isn’t a big transition when their sentences end. This makes me very hopeful that young people are going to get what they need, in terms of positive supports and programs.

Q: How did this reform come about?

A: In 2006-2007, it began to be clear that we needed to reform how New York state responds to teens who commit crimes. There were reports of abuse of children in state juvenile detention centers, and there were many children in detention who needed mental health services but were not getting services. The state Office of Children and Family Services had themselves done studies that showed more than 70% of males and 30% of females placed in these facilities had an adult felony conviction by the time they were 28 years old.

But the reports really fell on deaf ears until the Department of Justice stepped in and said this system is violating the rights of children. To their credit, OCFS Commissioner Gladys Carrion and other state and city leaders used that Department of Justice report as momentum to start closing down some of these facilities. Now NYC Children’s Services is working with local agencies to set up local residences.

Still, no one knows for sure how these programs are going to work. That’s why it’s so important for families to get involved. New York has great advocacy organizations that have played a key role in pushing for these changes. Families that have been affected by the juvenile justice system need to stay active in demanding that we treat our young people like young people and not like criminals.