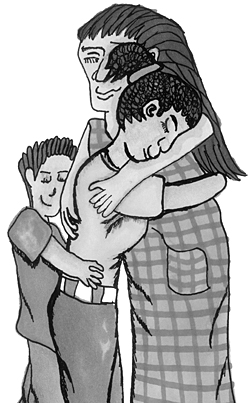 seemed older and wiser. My father was abusive, my mother had died, and I felt lost. But this man abused me. When he wasn’t calling me names, he was out in the streets getting drunk and having affairs. When my son and my daughter were still small, I had had enough. I let go of my anchor and sent him on his way to give other women hell.

It wasn’t easy taking care of two small children alone, though. Eventually I moved, found childcare and was making good money, yet I was not happy. I was short-tempered and angry and cried a lot. I didn’t know what was wrong with me.

One nice man at my job suggested that I see a therapist. I felt I was too strong for that nonsense. Yet I felt myself getting weaker and weaker and crying more and more. Soon I became so depressed that I stopped working, and some days I wouldn’t bother taking my kids to school. I just wanted to keep them home with me where I knew they were safe and taken care of. That got child protective services involved in our lives.

When my son was 6 years old and my daughter was 7, I broke down. I placed my children in foster care with my sister, and for a short time, I was hospitalized to deal with my depression.

Tension in the House

My sister was wonderful to my children. When I visited my sister’s house, I was able to witness the attention she lavished on my children. But seeing what my sister could provide made me fear that I would mess up my children’s lives if I took them back.

My sister woke me up. One day she said to me, “It doesn’t seem like you want them back.” My new worker helped, too. Finally I went to court and, after three years in foster care, my children came home.

After such a long absence, though, my children were angry, and showed it in many ways: lots of arguments, disrespect and shouting that “You should have left us at Aunt Gina’s!” Plus a whole lot of pretending that they did not hear me or my rules.

They spent weekends with my sister. When they came home on Sunday nights, the anger on their faces was chilling. I’d get angry, too, and just say, “Yeah, y’all home now, so go unpack and get ready for school tomorrow.” “Yeah, whatever!” they’d say, slamming their doors.

The Support We Needed

Luckily, when my kids were 12 and 13, we went to family therapy. In therapy, I found out a lot. At home all I heard was my children’s anger. But when we played games, I was able to hear them express their fears and frustration, and what they wanted from me. My favorite part of therapy was a game where we all had to say words that expressed how we were feeling at that moment, and how we felt about each other.

My children were fearful and disappointed in me. I had seemed so strong to them that it had been shocking to them to watch me fall so hard. They were scared that I might fall once again—and that our family would not recover from the past. They were asking, “Where do we go from here?”

I was determined to put their fears to rest by telling them and showing them that Mommy would never give up on herself again. I realized that we might not be able to get those three years back but we could move forward and make new memories, happier memories.

Over time, when my children returned from visiting Aunt Gina, they came home saying, “Hi, Mom,” and I could see in their faces that they were happy to be back.

Now my children are 16 and 17, and I have a 6-year-old, too. Sometimes I feel like we are having the ordinary dramas of a family with two teenagers. But other times I feel like the past won’t let us go.

I feel pretty easy about my daughter Janelle. My Janelle has blossomed. As a little girl, she always had a worried look on her face. She didn’t smile much, and if I yelled at her, she would flinch like I was hurting her. I couldn’t see myself from her eyes at that time, but looking back I see that I was intimidating. I truly didn’t have much patience for my children.

But these days, Janelle seems strong and independent. She is doing pretty well in school, looking for a job and planning to go to college.

Life doesn’t seem as smooth for my son, Ramel. Ramel is so talented and creative. He builds intricate aircrafts with his Legos and is a gaming wiz. I really want him to know how important he is to me, and I hope that one day soon he’ll realize what a wonderful young man he is.

But Ramel is like me. He gets depressed and doesn’t want to be bothered. He doesn’t listen to almost anything I say and he refuses to go to school. He promises to go to school consistently, but just when it looks like he’s getting the hang of it, he slacks off. He’s still angry at me, and he is not functioning in a normal way right now.

I recently found Ramel a new therapist. When we went together, he told the therapist, “All she does is repeat the same stories about what happened to her, yet she continues to allow people to walk all over her!”

“Would you consider yourself to be one of those people, walking all over your mother?” the therapist asked.

Ramel said, “Yeah! Why not? Everyone does?”

I don’t know how completely my children trust me now, but we are more comfortable with each other and we have come a long way. Despite the obstacles that still insist on blocking our paths, we are struggling through together, as a family.

I think my children have seen my persistence in listening to them and in rebuilding our family. It would have been easy, in the face of their hostility, to throw my hands up and say, “Y’all don’t need me.” But that wasn’t true. They needed me to be their advocate, to talk to them, and most of all, to be their caring mother.

For a long time, I didn’t think that I deserved my children, but now I know that no one else can be a better mother to them.