At community forums organized by the New York Center for Juvenile Justice, parents are turning out to talk about a pressing issue affecting teenagers and their families: In New York, 16 and 17 year olds are 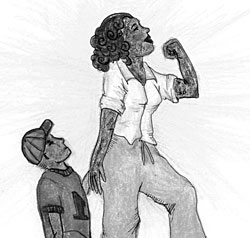 charged as adults for all crimes. Most other states set the “age of criminal responsibility” at 18; only New York and North Carolina set it at 16.

Michael Corriero, executive director of the New York Center for Juvenile Justice, was a judge for 16 years in the “youth part,” a special court within the adult court system where he heard the cases of thousands of teenagers ranging from 13-18. Here he explains why his organization is advocating to “raise the age” in New York:

Q: How does it affect youth and families to charge 16 and 17 year olds as adults?

A: Charging children as adults dramatically impacts their lives and the lives of their families. When teenagers are prosecuted as adults, their families do not have the same avenues for participation as they would if the case was tried in family court. In fact, the police are not even required to notify parents that their child has been arrested. The full weight of the law comes down on the child.

In family court, there’s more emphasis on providing families with tools to help them raise their children. In poor communities, especially, where services are weakest and the presence of guns and drugs is really a challenge, parents often need extra support keeping an eye on children after school and keeping them out of trouble.

In family courts, a case can also be resolved through “adjustment,” which means that the case doesn’t come through court at all. Instead, the probation department can connect the family and child to support services. However, this process is not available to teenagers tried in adult court. If an adult court judge feels that a young person doesn’t deserve a criminal record but needs services, the judge can’t necessarily place the child in residential treatment or link the family to supports in the community. The state will not pay for it.

Q: Why do you think we should raise the age of “criminal responsibility” in New York?

A: We know that outcomes for children tried in adult court are not good. Many studies show that prosecuting children in adult court does not help to address the issues that brought them to the court in the first place. These children also are more likely to get locked up again than children treated in the family court. Laws that criminalize children fall most heavily on our poorest families. Many poor children are returning to their families brutalized by imprisonment and hopeless because they’re coming back with a criminal record and unable to get the kinds of jobs that others can get.

Youth in New York State are being economically disadvantaged by these laws, too. Family court records are sealed but adult court records are not. That means that a 16-year-old New Yorker who commits a crime may end
up with a record while a 16 year old from New Jersey who commits the exact same crime may not. When these two teens apply for jobs or to college, they’ll be asked, “Have you ever been convicted of a crime?” The New York teen will have to say “yes” while the New Jersey teen will not.

All of our other laws protect children. Children under 18 can’t vote, can’t enter into binding legal contracts, and are protected from unfair labor practices. Only in our criminal law do we treat them as adults.

Clearly, we need to raise the age of criminal responsibility in New York State. Unless we support our families, we’re making it extremely difficult for a child to rise up and overcome the obstacles of poverty and of being surrounded by a drug and gang culture.

Q: How can parents get involved in changing how New York treats youth offenders?

A: We need to hear the voices of parents rising up in righteous indignation and demanding that these laws are changed. We’re working now to mobilize a strong grassroots community to put this issue on the front burner. We’ve collaborated with organizations including the Child Welfare Organizing Project, the Staten Island Council on Child Abuse and Neglect, National Alliance on Mental Illness, Mental Health Association of New York State, Families Together in New York State, and the Hunts Point Alliance for Children to organize for change. We’ve held community forums all across the state and recently in East Harlem, Bedford-Stuyvesant and on Staten Island. On September 20th, we’re holding a forum in the South Bronx.

The voices of parents are crucial to moving this idea up on the political agenda. Overwhelmingly, we hear that families want change. If you’d like to get involved, go to our website—nycjj.org—and join our mailing list. Make sure that your elected leaders know your frustration about how children are treated by the adult court. Join us in demonstrating to the legislature and the governor that we need to treat our children as children. We need to give children a chance to participate in the American dream even if they’ve made poor choices at a young age.