When my youngest son, Charlie, was in nursery school, his teacher suggested that I put him in a gifted and talented school for 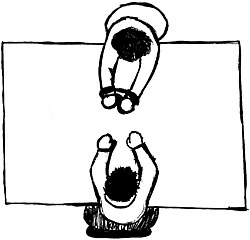 kindergarten. She told me that the school I was going to enroll him in wasn’t challenging, warning me, “When he reaches the 3rd or 4th grade, he’s going to get in trouble. The work is going to be too easy.”

But at that time I was a caretaker for children and I brought all the children to the same school, so I couldn’t easily put Charlie in a different school. Looking back, I often wish I’d tried to make an arrangement for Charlie, because what they predicted is just what happened.

Charlie got straight A’s until he reached 3rd grade. That’s when his behavior problems started. Many times I would sit with him in school during my break from work. He would get into fights and even got suspended a couple of times.

My other three children did not have the same problems. It wasn’t easy to raise my children in the neighborhood we lived in—the East River Houses. There were shootings, fighting, people killing one another. The children would be playing basketball and a fight or shooting would take place.

Still, I tried to be a positive parent. I would gather my children and my children’s friends in our apartment and let them play Playstation and board games. I would monitor them as they all played in our living room and I would cook for them. I took them to the pool. They all gave me respect and called me Miss Daisy. My home, to them, was like a safety net.

At home, I would talk to all my children and go over their homework. My older children came home straight after school. But Charlie was more influenced by the neighborhood.

You had to be tough in that neighborhood. Some kids wanted to pick at you and fight you. Charlie was small and he just didn’t have the personality to shake off challenges. “I’m going to fight back, Mommy. I’m no punk,” he’d say.

I always said when I was growing up that I’d be more understanding than my own very strict parents. My mother was the warden of the house. She had a short temper. I was unable to speak unless I was told to. Back then, it was corporal punishment, beating with a switch, cords, etc. But that’s not how I raised my own kids.

When Charlie started getting in trouble, I wondered, “Where did I go wrong?” I told myself, “I just have to keep on trying.” I sat and talked with him at home, gave him time outs, took away things, allowed him no company or grounded him for a week. But in school he kept fighting. “The children in my class like to test me,” he’d say.

I tried to speak to Charlie about what was bothering him. But his response was just, “Nothing.” That made me angry. I would say, “Why do you just answer ‘nothing’ so many times?” I wanted to give him an old-fashioned beating like my mother used to give to me, but I had to compose myself.

When Charlie was 9, I went to a therapist with him, but the therapist suggested several medications: Concerta, Strattera and two others. It seemed like too much for a little boy.

I felt that my son wouldn’t need to take medication if he was living in a great neighborhood, attending a challenging school and involved in after-school programs. I was sure that’s what he needed.

So I got my son involved in after-school basketball. He loved it and won a couple of trophies. I felt very positive then, and so did he. I thought his problems would go away. But his good behavior didn’t last.

The first incident that led my son to the juvenile system was when he was 11 years old. One day, a 15-year-old chased him with a knife. Charlie decided to retaliate with three friends.

Charlie was arrested and had to see his parole officer three times a week. I would say, “Please comply with the judge’s orders,” but Charlie did whatever he wanted. My son kept getting a lot of chances, but eventually he was locked up.

I was devastated to see my youngest son taken away in handcuffs, shackled like a criminal. That was my baby.

When my son came home from his first incarceration a few months later, I hoped he had learned his lesson, and I begged him to comply with the court order. He had to see his PO and get counseling at the Dome Project, where they had a therapy support group. He only complied for one week.

Next the court sent him to a group home. But when he came home after another few months, he refused to comply once again. Next they placed him in a therapeutic foster home. The judge thought that a foster parent trained to create a therapeutic environment would be able to give Charlie the structure he needed.

At this point, Charlie was 12 years old and he was still small for his age, with an angelic face. The foster mom told me my son had good manners and was helpful and kind. She wanted to take him under her wing. But within a few months, he’d had another fight in school and the judge placed him in a juvenile detention facility once more.

When I saw him in the courtroom that day, he looked worried and fragile. He held himself strong with his head up when he was handcuffed in front of me. But when he was sentenced, he cried and said sorry to me and to the foster mom. I was devastated again. I broke down in tears. He told me, “Mommy, it’s not your fault. Please don’t cry.”

While he was first locked up, I wrote Charlie letters and made it to every visit. Visiting Charlie was hard. I hated to see him in uniform. Other mothers would comment on how young he looked.

During visits I kissed and hugged my son. I spoke to him about his dog and tried to keep the conversation on positive things. I never pointed a finger like, “You should’ve done this, you should’ve done that.” I felt that that would have just made him more rebellious and angry.

Then Charlie was moved to a facility in Middleton, N.Y., far upstate. When I heard that bad news, I cried. I was only able to visit him twice. But in that facility they worked with him on his anger and gave him counseling and support. I saw a difference in his attitude and his thinking. My son made the honor roll six times.

When we saw the judge in court, she looked at his report card and assessment report and said he was beyond high school level and to keep up the good work. I’m so proud of the changes my son has made.

In December, my son was released. He went straight to an aftercare program in the Bronx, where he will stay before going home to his father.

His father now has custody of him, while I have visitation rights. I think this is a good decision for Charlie, because his father is stricter and lives in a better neighborhood. Charlie was hanging around the wrong people near where I live.

But it was also not my choice—I live in New York City public housing, and Charlie’s arrest record is putting my lease in jeopardy. Not having Charlie come home to me is one of the hardest things I’ve ever done.

On the day Charlie was released, I left my house early to make sure I would be there when he arrived. It was snowing when I came out of the train station, and the blocks seemed never ending.

My son arrived in shackles, but when they took them off, he came over and hugged me. I was crying with happiness and sadness. I was sad to see him in shackles, grown taller without me. I was happy to hold my son and spend the holidays with him.