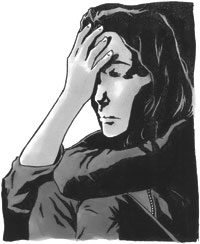 PTA involvement, regular pediatrician visits, church going, school attendance, and then Mommy’s boyfriend is abusive and Mommy is getting high some nights of the week—that’s what my addiction looked like.

For 15 years I lived a double life. One side of me: The almost perfect mother, daughter and friend. I had a 20-year work history and I owned my own home. My daughter was always well groomed with all of the little girly things that young ladies should have.

My daughter knew Mommy loved her. I volunteered at her school, and when she’d hear that Mommy was in the PTA room, she’d come and peek in with pride. My involvement with her and the school motivated her, and she graduated elementary school with honors and awards.

But then there was the other side of me: A cocaine addict with an abusive boyfriend.

Still, we were a good family in many ways. I only wish I could’ve gotten treatment while my kids stayed at home instead of entering foster care. All the good things didn’t need to be tossed away

When I started using cocaine in 1987, I liked the up feeling it gave me. I started using soon after my father died, and cocaine was also the only thing that took away my grief. For three years, my cocaine use was casual, but then I began dating a man who was unfaithful and hurtful. Cocaine went from being “weekend only” to taking over our week, and the relationship became twisted and ugly. When I finally left him, my use became out of control, because once again I felt a deep loss that I didn’t know how to deal with.

When my next boyfriend, “B,” found out about my cocaine use, he told me, “As long as it doesn’t control you.” I thought it didn’t, but even when I got pregnant with my daughter, I kept using cocaine about three times a week.

When my daughter was born positive tox, child welfare got involved. They let me take my daughter home because my mother agreed to care for her, and I agreed to go into outpatient treatment. I had a good job as a nonprofit administrator and I must have seemed trustworthy.

I really did want to quit using cocaine. But rehab didn’t help me deal with the grief and the depression that didn’t go away. Because I was not feeling any relief, eventually I stopped going.

Still, I walked a straight line and child welfare closed the case. Soon after, “B” and I broke up. I didn’t know how to deal with yet another loss—first my father then the father of my daughter—and when my daughter was about six months old, I started using again in moderation.

Then when my daughter was 1, I met a man who seemed like he could help me but who actually was an abusive addict. I could never tell what was true or false about Anthony. He acted as if he didn’t want me to use cocaine, but then he would take me to buy some. If we had a late night indulging in drugs, he would awake asking, “Do you have any more?”

Soon Anthony began to freak if I didn’t come home directly from work or if I took my daughter to do something special. He’d call my home over and over, interrogating my mother. He would call my friends and bully them for information.

Anthony liked to create chaos and alienate me from family and friends. He would say awful things like, “You’re a piece of sh-t, you’ve never accomplished anything.” It got so bad he called my family and my employer to air my dirty laundry.

During that time, my love for my daughter kept me going and work helped me connect to the outside world when I was feeling so isolated. Still, inside I was a wreck. My mother once told me lovingly, “You don’t act like my baby. That man takes you out of yourself.” I still feel ashamed that I was not able to break off that relationship while my mother was alive.

For a long stretch—years—I did break it off, but I constantly heard from friends that Anthony asked about my daughter and me. I still felt a flame because I remembered the good times and because on the surface, Anthony—like me—seemed very put together, very different from who he was underneath.

When we got back together, after a few months the stalking and the name-calling started up again like clockwork. But by then I was pregnant. During my second pregnancy, I really tried to control my drug use. I’d stop for a while, but after an episode of stalking or verbal abuse, I’d use again.

Like my daughter, my son was born positive tox. That’s when child welfare removed my children.

Knowing that both my children were born with substances in their system still anguishes me. My son remained in the hospital after I went home, but I continually checked with the hospital to see if he had any withdrawal symptoms. Thankfully, the answer was no.

One of my major challenges was that my child welfare worker did not take the domestic violence seriously, nor did she seem to understand how much it was the abuse that kept me using.

After I got an order of protection against Anthony, he was arrested for “aggravated harassment.” He even told me he would put me “in a body bag” if I would not be a part of his life. I was terrified, and I got a 911 cell phone and an emergency pendant that I carried with me at all times.

Despite his threats, though, the child welfare worker just said, “You have to work this out with each other.” I said, “Are you kidding me? He told me he was going to put me in a body bag.” But that’s where she left it.

And, about a week and a half after my son was born, CPS took my daughter from me. I was devastated. My little girl away from me! At 8 years old, she was my little partner.

This time, I was determined to get to the roots of my addiction. I took it into my own hands to find a good rehab program, and I made a connection with the director there. He told me, “I’m going to work with you,” and he really did. With his help, I began to come to terms with the grief and violence that kept me using.

Since then, “B” has become a positive figure in my children’s lives. Even in the most difficult of times, I continued to reach out to him for our daughter’s sake, and he responded. After four months, the court allowed “B” to supervise my children’s weekend visits home and he even became my son’s godfather.

Now it has been 5 years since my children came home. Our lives are really stable, not just on the surface, and both my children are doing wonderfully well.

After my case was closed, I became an advocate for other parents in the child welfare system. To support parents in crisis, I’ve been to many meetings where the decision is made whether to leave children at home or place them in foster care. I know what it’s like to look at a family that’s in disarray and to feel that the mom is so far from where she needs to be. It’s hard to believe that I was once so far from where I wanted to be.

I only wish that, even though I’d failed once to overcome my addiction, CPS had allowed my children to stay home while I got help once again. I also wish my caseworker had better understood the dynamics of domestic violence and addiction. Instead she left it to me to get the help I needed.

The eight months my children spent in foster care took a toll on us all. My daughter has told me that her foster mother beat her and that at times, my son was left in his playpen for hours at a time.

For a least a year after she came home, my daughter would come in my room in the middle of the night and call out, “Mommy, are you there?”

When I picked up my daughter from school she would peek around the corner and I would see fear in her eyes. Often I would call out in the crowd, “Mommy’s baby!” She would scream with pleasure, “Here I am, Mommy.” Now my children know that if they call out for me, I will be there for them. But it took a lot of love, consistency, and faith in the Almighty to get here.