I went through hell last summer because an angry neighbor called in a child abuse report on me after a neighborhood dispute. I was packing to 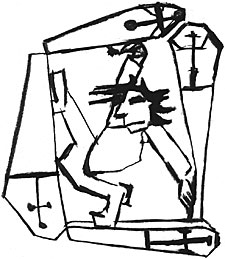 move when Child Protective Services came. I was also taking care of my 6-year-old son, who is autistic and who was also sick. They insisted that my home was hazardous and tried to put my son in foster care. After a long investigation I was lucky enough to keep my children. But throughout the investigation, CPS used my son’s autism against me.

Confrontation at the Door

When Child Protective Services first came, I asked the worker not to come in because my son gets extremely upset if the door is opened and it’s not time to go. That can cause him to have a meltdown, during which he loses control over his actions, and at times engages in self-mutilation. My son was already having a very hard summer, so instead of opening the door, I took my son to the screen door to show the investigator that I wasn’t trying to hide anything. I explained my son’s condition and I invoked my 4th amendment rights, which are supposed to protect all Americans from unreasonable search and seizure. I thought the investigator needed to show probable cause and get a warrant from a judge before she came in to investigate my home.

But when I declined entry, the social worker called for backup and before too long, there was an additional social worker and four policemen in my driveway. As I continued to deny entry, my already fragile son began throwing things around. I had been packing to move when they came, so he had a lot of things to throw. By the time they coerced entry about 40 or so minutes later, my home didn’t look like it had.

Even though I was doing what I believe was in my constitutional rights and in the best interest of my children, the beginning of the case seems to have colored the entire investigation, and convinced the child protective workers that I was harming my son, no matter how much I explained to them that what they were seeing is just part of dealing with an autistic child.

Building Their Case Against Me

First, they repeatedly insisted that it was child endangerment for me to lock my son in his room at night. I informed them that this was how I prevented his wandering at night and I told them that it’s often recommended by autism experts. Less drastic methods are effective for some children, but not all. Still, this became the cornerstone of their case. The caseworkers admitted that they didn’t know much about autism. But weeks into the investigation, they also admitted that they still hadn’t bothered researching to see if I could be right.

The second major issue they used against me was my son’s “fecal smearing.”

My son had had a “regression” since the beginning of summer—which means he seemed to lose skills and abilities that he previously had—and his personality had changed greatly. He started self-harming far more than he ever had before. He would pull his hair and pinch his skin, leaving behind bruises and slices. There were also several times over the summer when he would refuse to eat or drink for several days on end.

He also started smearing his feces. This is a common behavior in autistics. Once again, a web search would provide stories of parents who have gone through the same thing. There’s even an article that a parent wrote in collaboration with a police chief in Pennsylvania called Autism 101 for Mandated Reporters that specifically states: “Feces smearing is common and often occurs many times during the day and night.”

But CPS declared this a “sanitation issue”. Apparently, it didn’t matter that I cleaned up messes as soon as I was aware of them. What mattered was that they happened in the first place!

They also were concerned that my house wasn’t generally neater.

On the first day of the investigation, CPS took pictures of the dishes in the sink, moving boxes in a corner, and items that I’d pulled out to pack. It didn’t matter to them that I was preparing to move.

Once the investigation started, they insisted on surprise visits to make sure that the house was tidy. But my son would sometimes have outbursts and throw items around. I had a school document stating that he “destroyed” his classroom every day too.

When things got messy, I would immediately clean up anything that posed an immediate risk but I would put off most chores until after my son and daughter in bed. My philosophy was, “If it can wait until the kids’ bedtime, then that’s when I’ll do it.” Still, CPS workers repeatedly questioned me about why my home wasn’t neater.

I Can’t Cure My Son

Throughout the whole investigation, what was so insanely traumatizing for me was that CPS somehow expected me to be able to stop my son’s behaviors, despite the fact that there are no clear-cut answers for these behaviors and no definitive way to stop them.

In fact, well before CPS ever got involved, I had sought out medical help for my son on my own. I was told that certain medications might be able to help but that they carried risks and didn’t always work and the doctors didn’t recommend them. I also had begged for my son to be admitted to the hospital for testing but the doctors said that he was best off at home with me. I was repeatedly told that I was already doing everything I could for my son.

But suddenly, despite what the doctors said, my son’s autism was being held against me as an indication of neglect. Can you imagine how you’d feel if you were asked to stop your child’s medical condition—something nobody really has control over—under threat of losing your child?

Luckily my parents really supported me that summer. My mom took my daughter for the whole summer so I could focus on my son, and also so my daughter wouldn’t have to see my son at his worst. My dad took off from work to take us to medical appointments. Plus, I had friends to vent to and who supported me.

Since October, I have not gotten any further visits from Child Protective Services, but I’m not entirely sure that I have gotten them out of my life. I’ve never been given proof that my investigation was closed. I just received a letter from them in November stating that I had to continue taking my son to psychiatry appointments—appointments that I had made on my own—but it didn’t specifically mention what the finding was.

As for my son, he’s almost back to “normal” by now. I knew that he eventually would be. The medication that they finally put him on seems to be working and the regression behaviors are declining. He’s back to being the little boy that I remember—nonverbal, but very affectionate and loving.

Still, the trauma of being accused of endangering my children is a raw wound. I try very hard to remind myself that most CPS workers have good intentions. However, that doesn’t absolve them the harm they can do.