The day before my wife gave birth to our youngest child, I found out that she was using crystal meth. I was so shocked and hurt. But I 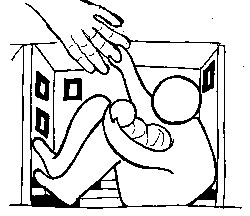 realized that it made sense. My wife had become so different than when we’d met. All we seemed to do anymore was argue.

When my wife gave birth, child protective services (CPS) told us we could not bring the baby home from the hospital and that our four other kids might go into foster care, too. I didn’t know whether to fight the CPS worker or run out of the hospital and hide my other kids. The worker told me to come to a Family Team Meeting at the CPS office later that day.

At the meeting, I broke down crying. I felt that all the work I had done was worth nothing. But the workers talked to me and made me realize that there were options for my family. They also said that some of my wife’s behavior toward me was probably related to the meth.

I realized that I still had hope for my wife, so I told the CPS workers that if she did a program, I’d be willing to work things out. They offered her outpatient so she could be home with the kids and me, but I insisted that she go to a treatment center with the baby. In our neighborhood in Fresno, CA, you could buy meth on every corner. I thought that going away was the only way she’d make it.

While my wife was in treatment, I became a single father. Life really became chaotic. I was surprised that our CPS worker helped us out with childcare, clothing, transportation and finding a new place to live where our kids could play outside.

Now my wife has been clean for 15 months and she is a new person. She is in school full time while I stay home with the children. Even though I was scared when CPS came into our lives, we wouldn’t have made it as a family if CPS hadn’t been willing to give us the help we asked for. Now we are a strong family once again.