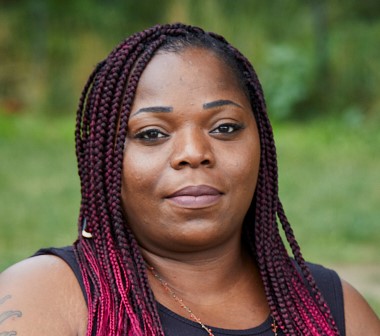 Thank you, Naashia for those powerful words. Just like Naashia, I’m here to echo the calls for change parents have advocated for years. The calls for more community-centered support and the need for drastic policy changes go hand in hand.

I am a Black Mama from New York City who is directly impacted by the family policing system with involvement going back multiple generations. My experience with the family policing system speaks to how it stays in people’s lives for multiple generations, never helping, but continuing to cause harm and trauma. I–along with the other impacted parents at Rise–do not believe that the system exists to help us. We believe that the system targets, surveils and punishes Black and brown families.

I want to start by sharing a quote a parent shared with us when asked what resources they need in their communities. They said, “I think that if we had better babysitters so people could go to work, or they had a better school system where they had like more after-school programs for children to go to. Because most of the time it’s either a neglect case you got ‘cause you left your child at home ‘cause you got to run to the grocery store to get some food, and you don’t really got your children. But I think that if communities had more daycare centers that was probably free for like six months, where you can work for six months and save money to pay a babysitter, I think that would be great.”

What I hear from this, and I hope everyone else also does, is that along with better community support, we need to overall reduce the reports to the State Central Registry (SCR) and review what mandated reporting looks like. Why? Because often, the calls being made for neglect and abuse are underlying calls for better support and resources. As many advocates against family policing have stated, “Poverty does not equal neglect.” As Rise has documented, we call on the State, OCFS and elected officials to target conditions, not communities.

As Naashia shared, our report outlines steps to take to help families effectively. At Rise, we all know the SCR acts as a direct pipeline into the system. Right now, the policies in place at City and city-contracted agencies mandate staff to make hotline calls to the SCR instead of directly serving and supporting families. Our report provides specific guidelines on effectively reforming the State Central Registry to eliminate harm to communities and families.

Organizations and institutions with mandated reporters on staff, such as shelters, schools and hospitals, should review their existing policies and develop concrete plans to increase the number of direct support referrals they make and decrease the number of hotline calls. For example, a lack of school guidance counselors may lead to reports instead of support.

Other immediate steps to shrink the SCR in New York State can include removing any parents from the SCR who are on the list because of marijuana use. This should be done proactively and should apply retroactively. This should be a complete removal from the register, rather than sealing the record, in alignment with the expungement of cases in the criminal legal system. This is a matter of racial and economic justice in a time when marijuana is increasingly becoming legalized.

We are also calling on the State to pass state legislation to end the time limit to appeal placement on the SCR. Parents currently have only 90 days to appeal when placed on the SCR, which is a very short period to prepare for and schedule an appeal, particularly for parents who are in crisis. Every step of the process is difficult and tedious.

The State can take many more steps to truly help parents and families from getting involved with the system and directly helping them. Again, our report was led by parents who were directly impacted by the child welfare system. Our solutions come from our direct experience. We know what we needed during difficult times, and we incorporated our calls to action in this report.

Thank you all for listening today.