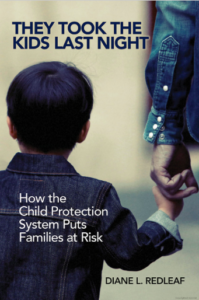 “They Took the Children Last Night: How the Child Protection System Puts Families at Risk,” by parent attorney and policy advocate Diane Redleaf, tells the stories of families who faced allegations of abuse after they brought their children to the hospital for unexplained injuries, unusual symptoms, or after an accident.

Until 2017, Redleaf led the Family Defense Center in Chicago. Telling the stories from a lawyer’s perspective, she echoes many of the themes parents have sounded when writing in Rise about their own experiences battling accusing doctors and the child protection system: Doctors and child protective investigators determined to find someone guilty, and parents stripped of their ability to protect their families.

Redleaf visited Rise to talk about the book, her goals in writing it, and some of her current strategies for reform.

Q: Can you give our readers an overview of what your book is about and why you wrote it?

A: The book is real stories about what it’s like to be a lawyer trying to help these families. All the stories are of people who were exonerated but only after a terrible ordeal that they still are suffering repercussions from years later. The stories show that even the most obviously innocent person can get caught up in this system.

I deliberately picked medical cases to write about, because those types of cases touch people across the socio-economic spectrum. It was meant to be a wake-up call, because unless people are aware that child welfare could affect them, it’s easy to say, “That’s someone else’s problem.”

Q: Your book focuses most on the story of Ben and Lynn (not their real names). What does their story tell us about the system overall and about these kinds of cases in particular?

A: Their story really reflects how terrible investigations can be. As soon as child protective services got the opinion of the doctor they were relying on—and her credentials were pretty limited, she was still in a training fellowship—the caseworkers who were doing the investigation didn’t care. They just wanted that one opinion and they were ready to run with it

Because Ben and Lynn were from a middle class suburban family with no history of violence—Ben was literally an Eagle Scout, Lynn was a social worker—they were in shock at how the system treats people with no dignity. It’s just abusive. They had the privilege not to expect it. Showing how bad the system can be even for a family with no pre-existing “red flags” makes the point that the system needs reform for everyone.

In Ben and Lynn’s case, it sometimes seemed like CPS was making an example out of them to say, “See, we’re not racist; we treat suburban white people badly too!” But white middle class families are much rarer in the system, and when they do come to court, they tend to have the resources to fight back.  In my book, I make the point that even Ben and Lynn could have permanently lost their kids but for the resources they were able to access—doctors who testified to their innocence and two lawyers on their case from start to finish.

Tony’s case, at the end of the book, represents a more typical demographic of juvenile court. Tony was also a foster child, which they tried to use against him. Tony is a pretty extraordinary guy. He founded a youth services agency. Even so, they went to the length of not believing Tony’s stepdaughter, who said she saw her sister fall. Instead, the system developed a narrative that the family had coached her to say that, when they never had time to coach her. Their case was just abysmal.

In a lot of cases, the caseworkers are looking for problems. If you fight for parents, you also get demonized. The doctors that we work with are called child abuse deniers. The court system is really set up to listen to one side and not the other.

Q: Were there particular readers you most wanted to reach?

A: The audience that I most wanted to reach and that I’m still struggling to reach is doctors, because the medical care system is responsible for a lot of the problems discussed in the book.  There are a growing number of child abuse doctors who basically call the shots in cases that involve accidents or the health of the child. A lot of these doctors operate under contracts with the child protection agencies but they don’t tell families that. In some of the systems, no one reviews the opinions of child abuse doctors.

I’ve written a report on the ethical concerns about the practice of child abuse pediatrics. In my opinion, it shouldn’t be a specialty at all, because child abuse is a legal conclusion and the medicine involved is across the entire spectrum of medicine. If we are going to have to live with this specialty, then it should have some clear ethics: to stop overnight interrogation of parents, to require disclosure of these doctors’ roles in cases, and to require genuine consultation across medical disciplines before these doctors make their determinations.

Lawyers and law students are another group I wanted to reach because lawyers who work in family defense and who represent other indigent groups are kind of considered second class. So the book is sort of to say that what we do is important, and we need to expand access to lawyers.

Q: How hopeful are you about system reform?

A: The amount of support we get as a movement is weak. We are all struggling to raise tiny budgets to do our work. But I also think we’re at the cusp of having a lot of reforms and that’s very encouraging.

The American Bar Association’s National Alliance for Parent Representation has done a great job at educating and supporting lawyers all around the country.

I recently helped to found a coalition of advocates called United Family Advocates that is working on federal child welfare policy reform. We’re a bipartisan group. Some conservative and libertarian groups agree with us about the importance of family and about keeping the government out of the family. So we said, let’s have a dialogue. And it went really well and we started to work on specific policy proposals.

We’ve got good responses from legislative staffers we meet with. They haven’t heard these voices before, and they like that we’re bipartisan.

Q: How do you think lawyers can partner with parents to achieve change?

A: First they have to realize that they should partner with parents! As a profession, we like to be the ones in charge. But because I do policy work at the same time as I do litigation, I see so much the value of parents speaking their own experiences and shaping the agenda for policy reform. I’ve always tried to bring parents together—it’s part of breaking the isolation and stigma that parents face. In changing policy, nobody is better at explaining the harm of the system than parents.

Parents also have to feel able to tell their stories. Ben and Lynn were wonderful to work with. They went over the drafts many times. But when I invited them to a book party, they didn’t want to come. Their kids are older now and they have never told their kids about the experience. And I realized, “Oh my God, I thought I knew a lot about the trauma families go through, but I didn’t even think of how a parent would cope with telling their children about being taken from them!” Some children of course know because they lived it and remember. But their kids were tiny and didn’t.