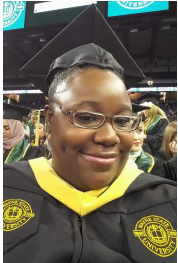 I unjustly lost 7 of my 8 children to the child welfare system because I was seen as unfit because I was a poor, African-American mother in an abusive relationship.

During my fight for my family, I discovered how child welfare professionals who don’t know you or your children can decide that you are a disease that your children need to be cured of.

Now I am determined to bring about change by writing about the harm that the child welfare system causes in the black community and advocating for policy change.

It was early 2013 when I was separated from my six daughters, ages 9 months to 9 years. I was 26, going through one tragic and traumatic experience after another. My mother, my only true support, passed away, and then I was illegally evicted from my home in Toledo, Ohio. I was also in a draining, 10-year abusive relationship with my children’s father. Even so, I was an honors student majoring in nursing.

I tried my best to shield my children from their father’s violence by putting on a happy face. I didn’t realize how much the relationship affected them until after they were taken and started therapy.

CPS informed me that my children had been taken into protective custody. I was inconsolable.

CPS accused me of using drugs and allowing my children’s father to maltreat them. These allegations were false. A week later I learned about the sexual abuse allegation from investigators. My sense of guilt and hurt for my girls was overwhelming.

I left my children’s father immediately. He was arrested two weeks into the case, pled guilty and was sentenced to 30 years in prison.

Once the shock and outrage subsided, I concentrated on moving forward with my girls as best I could. But CPS treated me like a co-perpetrator, not a victim of domestic violence. CPS also refused to provide me services or assist me with finding housing.

I found my own services within the first eight weeks of my case, submitted to a mental health assessment even though I had no history of mental illness, and didn’t miss a single visit with my girls. My girls continually expressed how much they wanted to come home.

In spite of all I did, a termination of parental rights petition was filed against me less than five months into my case.

The petition claimed that I had continued my relationship with the offending parent and alleged neglect, mental health issues and active involvement in the maltreatment of my children. CPS even used the jailhouse testimony of my children’s father against me. He claimed that I would be unable to care for all of my children alone.

I was dumbfounded and furious. I immediately filed complaints against the supervisor and caseworker. My complaints were ignored. The court granted the TPR four months later.

I can only compare my final visit with my girls to a funeral. My children were bawling. They wanted to come home. The caseworker forcefully marched them away.

I appealed the termination to the Sixth District Court of Appeals. A few months later, I gave birth to my first son, who was promptly removed from me despite being healthy, from a different father and having a safe environment ready for him.

I fought for my son. I submitted to random drug tests and another mental health assessment. I also continued to appeal my daughters’ TPR—acting as my own attorney—all the way up to the Ohio Supreme Court, but they refused to hear my case. That rejection broke me.

Then CPS petitioned for TPR on my son. It was quickly approved.

RIPPED FROM EACH OTHER

I eventually left Ohio, got married and welcomed a son, now 2. It’s the love and support of my husband, my children and a few friends and family that have gotten me through.

I have managed to achieve some measure of dignity knowing that my children and I didn’t deserve to be ripped from each other, and that I did everything possible to be reunited with them.

A CALL TO ACTION

I have devoted the past five years to advocating for parental rights and family preservation. I have studied child welfare policy and published policy analysis papers online via SlideShare. I write social justice articles on my blog, Tagi’s World, and my work has been featured in BlackMattersUs and published on Medium. I am also an active member of several social justice organizations.

I advocate for the creation of the African American Child Welfare Act (similar to the federal Indian Child Welfare Act, created to protect children from our country’s long history of destroying Native American families). My goal is to help change state and federal legislation so that what happened to my family cannot happen to another.