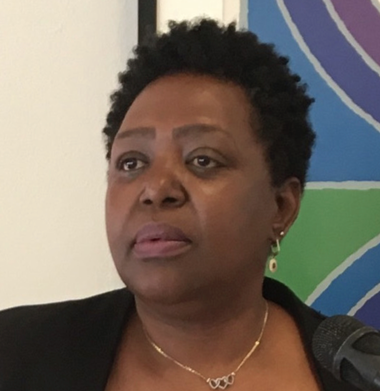 Joyce McMillan is a child welfare affected parent and the coordinator of We Are Parents Too at Sinergia NY, an organization that supports and advocates for people with disabilities and their families. The former program director of the Child Welfare Organizing Project (CWOP) in NYC, McMillan explains why she believes the only way to really protect families is through community action and legislation.

Q: How did you become a parent advocate and what roles have you had?

A: I joined the CWOP Parent Leadership Curriculum in 2014, and two years later I became the organization’s program director. I wanted to create programs that would educate parents and enable them to advocate for themselves and for others. I also created a speakers’ series with the New School’s Center for New York City Affairs to elevate parents’ voices by having them engage in robust conversation about the child welfare system and other systems that violate the civil rights of poor families of color.

Q: What made you focus on legislative change?

A: Many advocates were saying that the system was changing and that things were getting better for families, but to me those changes were in practice and practice is always at the discretion of the foster care system. There are almost 8,500 children in the foster care system throughout New York City’s five boroughs. That’s life shattering for families and devastating to their communities. I want to do more than help families navigate the system after their children have been taken. I want to prevent their children from being taken—unless absolutely necessary—by establishing legal rights for parents and families. I’ve put together a coalition to create legislation that would take people indicated for neglect off of the State Central Registry after five years, instead of having them on there until the youngest child in the home at the time of the case turns 28. Right now, having your name on the registry carries almost the same weight as a felony conviction. That record can block parents from getting housing or cause them to lose it. It can also be a barrier to gainful employment or moving up in their current careers. Yet most parents on the registry have never been afforded an attorney or even spent a day in court. I am also working on drafting legislation regarding Miranda Rights for parents because there is no due process in the child welfare system. Case managers can knock on your door, enter your home, strip search your children and interrogate you and your children. They can look in your cabinets and search your house for anything that they decide is a risk to your child’s safety. They are empowered to remove your children at their discretion. Removing children based on what might happen in the future is like arresting someone because you think they are about to commit a crime. If parents are going to be treated like criminals, they should have the right to an attorney the minute CPS knocks on the door. They should have the right to remain silent until their attorney is present without it being viewed by CPS as them having something to hide. I would also make it mandatory for CPS to videotape the questioning of children so that there is actual evidence of what they were asked, what they answered and the context of their answers.

Q: What are the steps to creating legislative change?

A: You need to identify allies. You also need to educate people so that they know the importance of supporting the legislation. You need to find a lawmaker to back your legislation. The process could take years and not go anywhere or it could lead to major reform, but you stick with it because our children’s well-being is at stake.