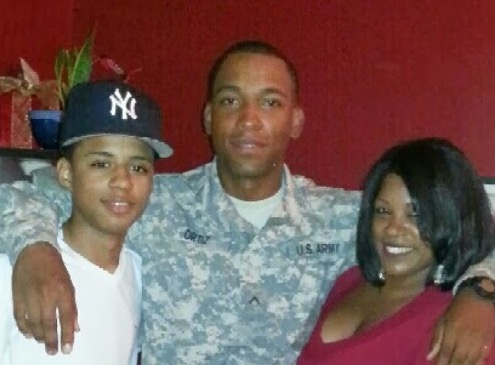 DInah with two of her sons

It was a knock on my door in the middle of the night in 1999 that altered the trajectory of my life. I was residing in a family shelter with my 2,4, and 6-year old boys when it happened. I looked through the peephole and saw an African American man and woman. They were caseworkers from New York City’s Administration for Children Services (ACS).

They told me they were there to remove my children because I used illicit substances and walked right past me and ordered me to wake my children so that they could do a “body check” for marks or bruises. My boys were afraid, but one by one they lifted their pajama tops, dropped their pajama bottoms, and twirled around so the strangers could search their little bodies. I felt helpless.

The workers then gave me two slips of paper, a referral to take a urine toxicology the next morning and a directive to go to ACS for a meeting about whether I was fit to parent my children. The idea of living without my boys was unfathomable—they are the air I breathe.  At one point, I told the workers that they would have to carry my children out in body bags. Instead of acknowledging my pain and desperation, they told me I was crazy and would have to undergo an evaluation.

They didn’t remove my children, but said that they would do so if I failed to follow their directives. The themes of compliance, submission, and obedience that would permeate my seven-year battle with ACS began that night.

There was no part of my life that wasn’t picked over by the system. My children’s doctors knew who ACS was and why they were in my life. Workers went to every shelter I stayed in to speak with case planners. When I tried to go back to school the caseworker introduced herself to my advisor.

I had never felt so degraded in my life.

Every court appearance was an insult to my boys and me. The workers, who were allowed to speak as experts about my family, gave misinformation which was accepted without question by the court. I was silenced into submission, not allowed to speak up about what my family needed.

I never denied the use of drugs, but I did deny that I was a horrible parent because of it. I felt like the judge who was making monumental decisions about my family should know that my boys always had a meal; I never spent money on drugs that the kids needed; they always had clothes and were kept safe; and I never did drugs around them.

NO POWER, NO VOICE

My children remained safely with me for several years but I continued to use drugs. It numbed me from thinking about the loss of my mother and family issues I had. That led ACS to request that my children be removed from me. I knew the workers thought that I had chosen drugs over my children and wasn’t worth the trouble.

Thinking like a mother, I preemptively sent my boys to live with family members in upstate NY. Another foster care agency was assigned and my family members upstate became my children’s foster parents.

My children remained upstate for a few years. I saw them often and ended up living with them under the radar for some time, but when the agency found out they tried to remove them from my family. So I moved out.

After my family was separated, I had countless new workers dictating what I should do, when and how to do it. They also always found a reason to say I wasn’t complying and would retaliate whenever I did something they disagreed with. Once, when I went to a program of my choosing instead of the one they referred me to, they wouldn’t give me transportation to get there. When they set up a time to do a home visit at 3 pm, I’d wait until 4 at which point I would leave. They would respond with unannounced visits.

I felt trapped in a system that wanted me to fail.

When you are powerless in a system that is tearing your family apart, you hold on to any little ray of hope. My hope and strength came from my boys and the deep and instinctual knowledge that I, as their mother, could not and would not allow strangers to obliterate the years of nurture and love I had provided to my children.

I began to educate myself about the system’s policies and their obligations to parents, and every time the worker would not act in accordance with them I would reach out to a supervisor.

A few months after I moved out of my family’s upstate home they moved to Florida with my children and I follwed suit. I was able to fly back and forth to my court dates because they were very far apart. During that time, I found an apartment, a job and attended another drug program and parenting class and anger management.

ACS attempted to make our moving to Florida into a controversy, telling the judge that we moved without permission. But the judge disagreed and ordered ACS to send someone to visit my new home in Florida. If all was good the children would be returned to me. The home visit went smoothly and after several months the case was closed.

It was as if we had finally been released after being held hostage to the system for years.

We eventually moved back to New York and I interned at the National Advocates for Pregnant Women (NAPW). There, I met two wonderful women, Emma Ketteringham and Lynn Paltrow who offered me unconditional support in building a career.  We spent hours talking about what happened to my family and how we survived. They offered materials to read and a perspective that put what happened to my family into context—the system treated families like mine differently because of our race. The fact that we live in the “hood” where police and caseworker surveillance is a way of life makes us more likely to have ACS called on us than our counterparts in white privileged neighborhoods, where there’s widespread drug use but children there aren’t at risk of being separated from their parents.

I met other women who had also lost years with their children. Every story gave me strength to fight for women like me.

For seven of the eight years since ACS was last in my life, I’ve worked at The Bronx Defenders, a holistic family defense practice that provides high quality legal representation and support to parents who can’t afford lawyers. I served as a parent advocate for several years and recently became the Parent Advocate Supervisor. I have helped hundreds of families maneuver the system and continue to advocate for parents as well as mentor other parent advocates. I know how important it is for parents to understand their rights, their choices, and the consequences when they have a case.

I help them find their voice so that their humanity and importance to their children is seen.

I also speak all over the nation—without reservation—in hopes that those with similar experiences feel emboldened to speak out so that we can shift the perception of who a parent affected really is, and so that people will understand that the circumstances a parent is experiencing does not mean they love or want to protect their children any less than any other parent.

I want the stories of parents to be told in their brutal honesty. We are asked to be humble, to be thankful, to say we appreciate the help. But that is not everyone’s experience. It was not mine.

My family is strong in spite of the system, not because of it.

I urge parents affected by the system to get involved in the parent advocacy movement. To speak up and speak out and to work alongside all other advocates to create the change they want to see.

There is no better voice than that of a parent who has experienced it firsthand.