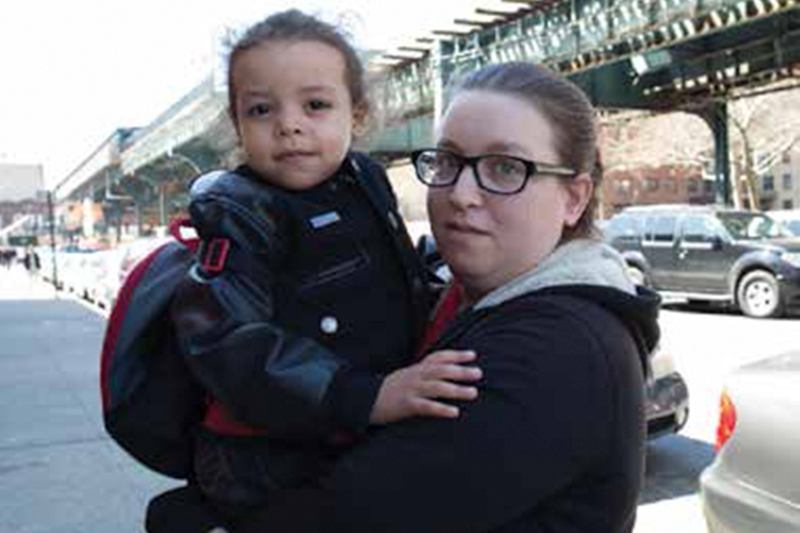 Adoption option: Sara and her son

This is not about what’s easy to write. This is about what people need to know. This is a pain and suffering that never goes away. I really miss my little girl every single day. When I last saw my daughter she looked so beautiful and happy. She looked almost exactly like my son, Aaron. her long curly brown hair. Her skin a little darker than mine. short and cute. I’ll never forget her smile.

SAFETY FOR MY DAUGHTER
Sharon went into foster care when she was only 2 1⁄2 months old. I was in an abusive relationship. I felt that things could be—should be—better for her.

Deciding to let her go was traumatic. But when I realized that my boyfriend’s abuse was not only affecting me but her as well, I knew I had to get her somewhere safe.

One day, when I knew that my boyfriend would be gone for a while, I dressed Sharon and left her with my social worker, telling her some of my situation. I was hoping that someone from my family could come and get her. Things didn’t work out and Sharon went into foster care.

During the time I was being abused, I could hardly go anywhere without my boyfriend, and I certainly couldn’t visit Sharon. I didn’t see Sharon again until they took Aaron away straight from the hospital when Sharon was 2 years old. By then, I’d escaped from the relationship and I started visiting Aaron, who was placed with his sister.

When I met Sharon’s foster family, they seemed to be taking really good care of her. Sharon has asthma and vein of Galen syndrome, a serious disease that requires constant care. Despite these conditions, she always looked and acted happy, and her foster parents made sure she had the best doctors. it was more than a full-time job. I didn’t know if I could do it.

At the beginning of my relationship with the foster mother, she was really understanding, concerned and generous. we would sit and talk, eat together, play with the kids. She wanted to know my story. She was shocked by how my ex-boyfriend treated me. She talked about how my kids and I needed to see each other and have good relationships.

However, there were times when I waited for visits followed by disappointment when no one showed up, with really poor excuses later on about why.

I saw Aaron a lot more than Sharon. With Aaron, the goal was always reunification, and visits increased from once a week, to twice a week. We also spent time in mother-child therapy.

At first, I felt that I might not be doing right trying to get him back. But through therapy, I learned to calm him down. I learned to be there for him and to give him his independence. I learned so much about how to keep him happy.

With Sharon, the court said I had abandoned her, and because of that, I shouldn’t get her back and didn’t have the right to see her as often as Aaron. Sharon also had doctors’ appointments and therapy, which her foster mother said kept her from visits.

When I did see Sharon, I loved to play with her, give her presents and be silly together. But she thought of me as a friend, not her mother.

After Aaron had been in care for almost three years and Sharon for five, I was given a choice. The dreaded choice. Either fight for my little girl, which they said I was pretty much guaranteed to lose, or sign my rights over and have the opportunity to visit her even after she got adopted.

My heart breaks just thinking about making that decision. I feel like I failed my daughter. But I also knew she was very happy with her “Mommy and Daddy.” It was hard to think of taking her away from that.

The agency and court also told me that my ex-boyfriend was trying to gain custody of one or both of my kids and that signing over my rights would stop him from having any rights. I felt like they weren’t being honest with me. At the same time, I was concerned. what if they were telling the truth? Now I think they would have told me anything as long as I signed the papers.

The foster mom used to say, “Don’t feel like you won’t see your daughter just because you sign the papers. In fact, you’ll see her even more.” She talked about how we would hang out, go places. She promised I could be there for holidays and birthdays. The court agreement we signed said that I would still be allowed to see Sharon, talk to her and send her presents.

THE RELATIONSHIP FELL APART
But when I became determined that no matter what, I would keep fighting to reunify with Aaron, the foster mother started saying that the agency and court were making a mistake and that I couldn’t care for Aaron properly because I have a mental health diagnosis. At the time, I also didn’t have housing for Aaron. We would have to reunify to a shelter. “What kind of life would he have?” She said. She even got her own lawyer.

But I couldn’t give up on being my son’s mother. I fell in love with him the second I laid my eyes on him. I was in Aaron’s life from the time he was brand new and I love him every second of every day. I am his mother. I completed every program, and only got good reports from all my services. There was nothing his foster mother could do. Soon, we stopped talking in a friendly way. We stopped eating together. Eventually, the judge determined that it was best if we didn’t communicate anymore.

After my case closed, I saw Sharon a few times and then the excuses started and I saw her less and less and then not at all. When I asked the agency to help, they said I had to work it out myself.

Since then, I have asked myself many times, “If I went to court, could a judge do anything to make sure that Aaron and I see Sharon?” But I am really scared. what if Sharon’s adoptive mother is still trying to get Aaron? What if she starts to call in false reports about me, just because she can?

Recently, though, I spoke to my lawyer and he told me that while there are no guarantees, there’s a chance that if we go to court and show that Sharon’s adoptive mother is not honoring the visiting agreement, a judge might order her to let Sharon see me and Aaron. I’m not sure I’ll win, but I want to try.

MY CHILDREN DESERVE EACH OTHER

I think about my daughter every day. I feel like a piece of me is missing.

I feel bad for Aaron. He and his sister deserve to have a relationship. They lived together for almost three years. They were so close to each other. For a few weeks, after he came home, Aaron cried for his foster parents and his sister every day. Then he started asking about them less until finally, he stopped asking. Still, I think Aaron and Sharon would be happier if they could look forward to seeing each other.

I believe that no parent should have to make a decision to either sign over their rights and be promised the chance to see their children, or fight for them and take the risk that if they lose they’ll never see their children again. If there is an agreement made in court that visits should continue, that agreement should be enforced.

I also think that in situations like mine, someone has to tell foster parents: “Listen, this child has a mother who is fighting to get her baby home, so you should prepare emotionally and physically for that time.” Then both sides need help planning for how to have a relationship if that’s what’s in the best interest of the children.