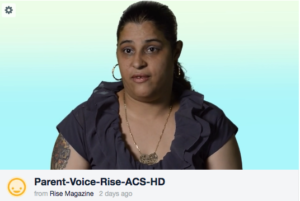 ACS has a training academy for new staff, Satterwhite Academy, and a new Workforce Institute in partnership with CUNY’s School of Professional Studies, that will train child welfare staff citywide. The focus of our work is to help staff really understand the complex nature of the work that they do, with a focus on building empathy and helping families help themselves using their innate strengths.

Parent Voice in the Classroom

I’m relatively new to ACS and the child welfare system, and when I started here, my boss, Deputy Commissioner Andrew White, told me that I should get to know Rise because it’s an amazing organization. We hadn’t developed our training courses yet, but I thought, “Wow, I know I will need this organization to help us develop our programs.” I knew that we would want to bring parent voices into the classroom.

The first thing we did was invite a Rise parent leader to present to our newly-hired staff on their first day at Satterwhite Academy. I’ve heard that when Jeanette speaks, it’s really impactful. It’s an “A-ha!” moment because a lot of our staff come in wanting to help children but don’t necessarily focus on the fact that children are part of a family. They’re often thinking they’ll help the children, and that the parents are the problem. Early on, it’s really important to switch that dialogue around to strengthening the family. Rise’s presentations have helped us do that.

A New Video of Parents’ Stories

This spring, we decided to make a video with Rise, because a parent leader can’t come to every one of our classes. We wanted a video that was real about the challenges in parents’ cases and what didn’t work, and also about what did work.

Watching the video while it was being made, I felt like I got to know the parents and fell in love with them and their stories. There’s so much to learn from their stories.

Jeanette spoke about being very angry when her son was in foster care. In her beautiful style, she describes her worker saying to her, “Look, this is your life.” This was a moment when someone was real with her. Up until then, people were just intimidated by her anger and didn’t care about who she was. This worker’s real talk broke through to her.

Another moment I like is when a father, Nelson, describes his caseworker helping him with conflicts with his son. His caseworker said to him, “Show up. When you show up, your son will know you care.”

The last parent, Sara, described that she got a preventive caseworker after her son came home from foster care. She says the preventive worker was there just for her, to help her figure out who she could be.

Anyone watching the video would have to walk away thinking, “What kind of caseworker do I want to be?” It’s really moving to hear about the caseworkers who didn’t seem to care and those who did, and it would be hard to walk away saying anything but, “I want to be one of those who care.”

I shared the video with an advisory group of 40-50 people. They were blown away by it. People were silent and nodding, and the unanimous feeling was, “Wow, this is really going to make a difference.” It will help our workforce tune in to parents—to helping the whole family.

We are planning to reach 7,000 people with our trainings in the coming year. All of those people will see this video. And I feel like it’s the kind of video that, if you saw it five times, that would be just fine. It’s even something to just send to a friend; it’s moving and eye opening.