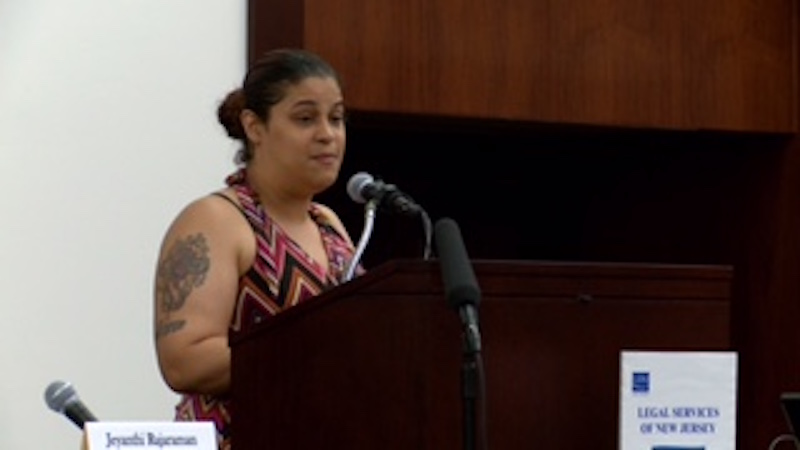 Jeanette delivered this speech at the NYC Administration for Children’s Services Reunification Month event “Better Together: A Celebration of Families” at the Children’s Museum of Manhattan on June 25, 2016, and the New Jersey Legal Services’ Family Reunification Day event on June 30:

Telling people my story was never my thing. Talking about myself, my life, was not something I wanted to do. But when I became a parent leader in child welfare, I decided to stop living in fear and own my story—the good, the bad and the ugly—because everything that I have gone through has brought me to this stand today. And though my struggle was real and traumatizing, I have been able to overcome and give a voice to those parents who feel as if they have no voice.

I felt so shocked and scared that I hit him.

He was gone for three whole years and my love was cold in my heart.

It was a scary feeling that I had my baby home and I really didn’t know him. For three years I wished for the moment that he would be home, and when the time came, I was scared, confused on what to do, and how to do it.

I thought it would be easy but in reality it was so difficult to adjust him to my views, my morals, my ways of living. It felt like I was re-raising my son all over again. He kept asking me for his own room, his backyard, and God how I cried because I couldn’t afford that type of living. It was just me and him in a one bedroom apartment, and there was no backyard. It was difficult to adjust him into my world, not the white picket fence he was getting used to living in.

Looking back, I see that, because of my fear of losing my son, I was actually too soft on him. I was always cautious on how I spoke to him, or how I disciplined him. It was very difficult for me to tell him no. I would let him sleep when he wanted, eat when he was hungry and play as much as he wanted. There was no structure, no such thing as discipline. The difficult part of that was that I felt like I was buying my baby’s affection instead of him just loving me and being happy he was with me. My love just didn’t seem like enough at the time. I just was unsure of everything.

I also had to learn to manage my time. I was used to it just being me, 3 years of no baby. Getting back into work and school and still having time for my baby was complicated.

Putting him in school was very difficult. He would scream, hold my leg and I would catch myself crying with him and just taking him home. When he left he was a 2-year-old baby; now he was a 5-year-old boy who thinks that if I drop him off, he won’t see me again. The fear stayed with him as well as with me.

Still, there was a part of me that loved when he cried at school. I was able to comfort him and assure him he was staying with me—by taking him home. It was a great feeling to give him that security.

At first my job was understanding but after a while it became too much. I felt like I was failing all over again as a parent.

It wasn’t an easy transition but with patience, love and understanding, but 14 years later, I can say that we are thriving as a family. I have three more sons, and child welfare has never again been involved in our family’s life.

Almost 10 years ago, I decided I wanted to help parents get their children home. Facing the pain and struggle that comes with an investigation is not easy. To become a parent leader, I took trainings at the Child Welfare Organizing Project, started writing for Rise and volunteered my time so that people in authority could notice me. I also went back to school. I strived to get good.

I am proud of what I have accomplished as a voice for other parents facing the child welfare system.

I am also proud to be a great mother. This time I can say it with pride: I am a great mother. I love my four boys deeply, and I have learned to be patient with them, as kids will be kids. Now I just I take away their Xbox One or PS4 and I swear they act like they’re dying, as if it’s the end of the world.

If I leave anything with you today, let me just say:

It may seem at times that it is too much of a new challenge to adjust your own children to your way of living after they have been in foster care for a long time. It’s an uneasy feeling, not knowing if you’re doing things the right way, if you’re going to fail again, and having to get to know your child in a new way. The fear that parents stay with is real.

But with time, patience and love, our children will see that we fought hard to get them home and that we love them more than words can say. There is no time nor distance that can change a mother’s love for her child.