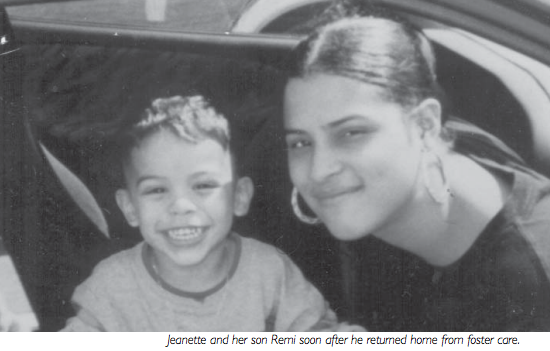 Feeling powerless can make you feel angry. Angry is how I felt the whole three years my son was in foster care—and how I acted.

Finally, a worker took me aside and was straight with me. She told me that the way I was acting made the agency think I was the kind of person who would solve any problem with violence, and that made them think that it was not safe for me to have custody of my son. I appreciated her honesty. After that, I was determined to change.

Keeping my emotions inside felt so hard that at times I thought I would explode. Still, I learned to do it for my son’s sake. Here are some of the things that helped

2) I found a way to let out my pain—outside of the agency: I learned to wait until I left the agency to vent, cry and scream. Then I did whatever it took to release the hate and hurt I had inside, without hurting myself or anyone else. After visits, especially, I would walk home and just cry and feel how sad and scared I really was.

3) I found someone who listened to me, not judged me: Lots of parents feel so secluded going through the system. Feeling alone with so many overwhelming feelings can make you shut down and lose faith that you can overcome obstacles. I was lucky to have my fiancé to hold me when I wanted to die within my own skin. He helped me believe that I could go on.

If you don’t have anyone to let your feelings out to, you might want to find a parent support group, a parent advocate or a therapist to talk to about the pain of having your child in care. Sometimes letting your feelings out on paper can help, too. After my son came home, writing about what I’d been through was how I began to heal the hate and hurt I still carried with me.

One thing I’ve learned over the years is that being angry was not wrong. It’s normal for parents facing child welfare to feel angry. Being angry meant I cared so much about my son that I would fight for him. But I also learned that I needed to control that anger to succeed in bringing him home.