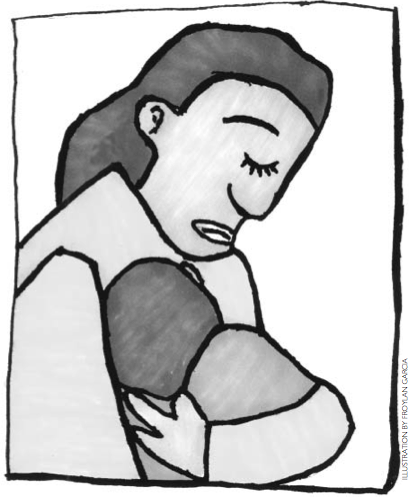 When child protective services took my son Logan, I thought my life was over. Logan was 9 months old. I didn’t know anything about the foster care system.

After an emergency hearing, I got visits with him twice each week for one hour. I spent two years visiting him without missing any of those visits. But I didn’t leave Logan’s father, who the agency considered a threat.

When I learned that the agency had moved my case “upstairs” for the adoption process, all I kept thinking is “Why me? They can’t take him from me!” I argued with my caseworker for months because I refused to have Logan taken from me permanently.

Then in June of 2013 I found out I was pregnant again. I was happy because I wanted another child. In August 2013 my second son, Brycyn, was born. I was allowed to take Brycyn home from the hospital, and I had high hopes that I would soon have Logan home, too.

When Logan first met his brother he was curious and unsure. He kept poking the baby and when the baby cried Logan cried! It was the cutest thing ever.

But Brycyn was placed in foster care in December 2013 when he was four months old because I still had not broken off my relationship with the boys’ father. What made it hard to leave is that I depended on his paycheck. I blamed the County and was very angry.

A Coach and Ally

My visits with Brycyn started out in a room with a two way mirror at the County agency for one hour twice a week. But in March, I was placed in a program called Visit Coaching. My Visit Coach, Robyn, supported me as I played and connected with Brycyn. We went to parks, took walks in the woods, and enjoyed picnics. As we worked together, I learned that I could recognize Brycyn’s needs and meet them.

Robyn has been a great asset when I need to vent my problems because she listens and does not judge. Working with Robyn, I grew the courage to write letters to the foster family and to my sons to express that I loved them.

Through the visit coaching, I came to know Brycyn’s foster family very well. For our visits, foster mother packed Brycyn man-sized lunches with all of his favorite foods. We had a birthday party to celebrate Brycyn’s first birthday together. They even hosted a Christmas party for my family in their home. Then, in May 2014, Logan was moved to the same foster home.

My Visit Coach also had a huge impact on me by introducing me to Rise. Rise helped me understand that there are other parents out there who have been or still are going through what I am going through. Rise helped me to not be afraid of my past but to push forward and keep going.

Between the visit coaching and Rise, I began to take responsibility for my decisions and realized that my children were in placement because of mistakes I’d made.

In September 2013 I agreed to do a voluntary termination of parental rights for Logan so he could be adopted by the foster family. I made that very hard decision because I loved him and wanted what was best for him. I was living in a shelter and not working and I didn’t know how I could support two sons.

Now I am now getting ready to receive Brycyn home after a year of hard work.

Four years after Logan first went into foster care, I have accomplished everything the County asked me to do. I found enough strength to finally leave the father of my sons and move on.

Thanks to the support and help of many people, I am also employed full-time at Wal-Mart, and after only two months I received Employee of the Month. I have officially signed a lease for my very first apartment. Even though I was going through all of this turmoil, I maintained a college education and earned my business degree.

I worry about upsetting the connection my sons have in the foster home. I also wrestle with fears about what Logan may feel one day when he understands more and sees that Brycyn is home. Still, Brycyn and Logan share a common bond and know they are both loved unconditionally by their mother and by their foster parents.

I have learned that life is a journey and every journey has a beginning and an end. Somewhere in the middle of the journey you may hit a road block like I did. It can feel like you have no choices. I kept saying, “I can’t do this!” but with support I was able to start to say, “Ok, I can and will do this!” Eventually I felt good knowing that I am the captain of my own ship.

Recently I was asked to write an article for my agency’s newsletter. I was able to share my story with soon-to-be foster families and adoptive families who attended a training about Visit Coaching and about the importance of foster and birth family connections. I was able to tell them, “I believe that Brycyn and I and the foster parents who have the privilege of adopting Logan will continue to stay connected for the sake of the children.”

I am thankful I had the support of caring people and the courage to press on to become a stronger, more confident parent. I did it for my sons.