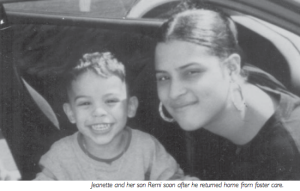 When I was 19, and my son was 2, I lost my son to the child welfare system for three years because I hit him with a belt.

I was raised that if you get out of line, you get hit. Mom and Grandma would hit us with a belt or throw slippers at us, the old school Puerto Rican way. When I moved to Philly, Step-dad was worse. He was the throw-you-down-the-stairs, you-gonna-respect-my-rules, don’t play type of Dad.

To be honest, my reactions were harsh and even scary at times. When my son came to a visit with a cut on his face, I attacked his foster mother and threatened her. I did not know how to control my feelings, my rage toward the system. I was sent to anger management three times.

It took me years to realize that the workers saw me as someone who would try to fix any situation with hitting, and my actions hurt my case. But at 19 years old, I didn’t see that.

The workers had so much power over me, and I was in so much pain. I really needed them to explain things to me in a reasonable way. Instead, they were quick to judge and took the worst out of me.

Eight years after my son came home, I started working as a parent advocate at a foster care agency.

At the agency, I was often frustrated. When I tried to speak to caseworker about a parent, I sometimes felt like they didn’t care about learning more about the parents they were supposed to be helping. I felt that workers didn’t get it—the anguish, the frustration that comes with parenting.

Yes, I worked with a few families that lost their rights for not complying and I got it. But in other cases I saw parents fighting tooth and nail and the agency seemed to run them ragged – adding services, moving visits backward. I saw that parents felt that, even when they were complying, they faced a judgment and struggle that made them want to quit.

Then I worked with a parent who brought it home to me just how scary it is being the one making the decision about families.

When I met Ms. P, I invited her into my support group. She was shy but she saw the other parents open up and she did also. The charge in her case was excessive corporal punishment. Her baby had a dislocated arm.

I decided to help her get her babies home because I felt like, “Who I am I to judge her? I made the same mistake with my own son.”

During visits, I could also see the bond, the love between her and her girls. She hugged them and played with them. The girls would ask her, “When can we go home?”

I was so happy to be part of the reason her girls got trial discharged to her. I had helped her stay focused and complete services. When workers would say, “Can Ms. P handle her boyfriend’s twin 5-year-old girls and the baby—and she’s pregnant?” I insisted on her reunifying and she also assured the workers she’d be OK with the girls.

Then, shortly after the kids went home on trial discharge, Ms P called me to say the baby got hurt

When I saw the baby in the hospital crib, it was a sad thing to see. She had bandages on her inner thighs and could barely move. Ms. P had a story about how her daughter was injured, but when the doctor came out, he said it couldn’t be true.

As she was being arrested, I left the hospital.

I walked out crying and angry, thinking, “A sweet little baby girl with broken bones?” I asked myself, “Where did I go wrong? Did I push so hard as an advocate that I would help parents reunify at any cost?”

I went to my supervisor after I came back from the hospital. I was very emotional. My supervisor was understanding and compassionate.

I lost a lot of sleep over that case. I thought back to when I hit Remi and asked myself hard questions: “Was ACS right to take my child? Could I have lost my cool even worse if no one had stepped in?” I also had to really think about the fear that caseworkers feel of making a mistake or bad judgment call on sending kids home. The job is not an easy job.

After that case, I had to work even harder to stay objective and open-minded as an advocate. I couldn’t be too friendly with parents, but I also couldn’t close myself off. Parents get enough of that.

I had to remind myself that, ultimately, what helped me get my son home from foster care was having people who believed in me the way I believed in Ms. P. My son’s second foster mother, Gladys, thought that my son and I belonged together. Though the agency didn’t give us more visits together, Gladys made it happen!

After school, I would often walk home with them, help Remi with homework, eat dinner with their family, and even put him to bed. Gladys took a risk for my son and me, and it paid off. What would have happened if she didn’t?

Now, Remi is 18 and my husband and I have three more boys. We have never had child welfare involved in our life again.

When you get into this work, you always have a bias in one direction or the other. Most caseworkers and judges are likely to have a bias against parents. Our image of parents in child welfare is that they’re monsters.

Someone like me may be biased in the opposite direction. When I saw Ms. P, I saw myself—someone who just needed a second chance.

Still, I wouldn’t want to come into every case expecting a Ms. P—and that is what a lot of professionals do. There are just as many mothers out there like me. It’s not as obvious when kids are hurt by staying in foster care, but I know that being apart from me for three years hurt my son.

I know in your work, you’ll be looking for Ms. P. I hope you’ll keep as sharp an eye out for parents like me.