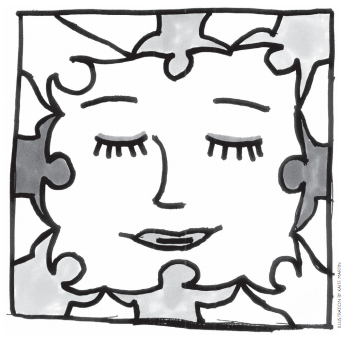 My father was gone and my mother had died by the time I was 7. I was raised by relatives. My main caregiver was what you’d consider “old fashioned”—strict and not very affectionate. I felt insecure and always looked over.

Going through foster care gave me strength and resilience but also a place of loneliness and feeling unloved.

After I aged out, I maintained an apartment and a job at Meals on Wheels. But a part of me felt vulnerable, lost and bitter. I had long periods when I would isolate myself and feel angry, or else hang out with the wrong people.

When it came to dating, I needed love so badly. When I didn’t have it, I felt like I didn’t exist. So if a guy made me feel important, I was blind to the fact that he might be bad for me.

I was also controlling, insecure and jealous. I felt like my childhood gave me justification to act out in romantic situations, so I didn’t back down or try to address my feelings. Instead, my mentality was to love hard or not at all.

I was 23 when I met my child’s father. When he said I was beautiful and told me all the nice things he was going to do for me, it made me a happy person with a glow. When he criticized his brother for being “too friendly,” I just felt lucky that he was protecting me even from his own family.

But soon after we moved in together, he began to pressure me for sex all the time and encouraged me to cut off contact with friends and family. I tried to deal with it at first, hoping things would turn around, because at times he was loving and respectful.

But he also struggled with mental illness, and when he was unstable, his behavior could be downright scary. Once when he was having a manic episode, he collected every sharp object in the home and threatened me. I had to call the police or I was definitely going to get hurt. After that, I moved out and took out a restraining order on him.

Soon after, I learned I was pregnant.

I felt like this baby was a blessing and a chance for me to become a better person. But I also felt lonely, vulnerable, stupid and afraid. I’d just moved to a new neighborhood, and I’d also lost my job, so I had few friends, little money and no place to go.

As my pregnancy wore on I reached out to my relatives. I hoped my pregnancy could help me make things right. I felt hopeful about being a parent when they threw me a beautiful baby shower.

But my relatives also said they felt sorry for the baby because her parents were crazy, and that I was going to suffer. That made me feel hurt and angry, like I had to put on a brave face and keep all my own fears
hidden.

Right before my baby was born, I decided to try again with my baby’s father. I really didn’t have any feelings for him anymore. But I was low on money, feeling lonely, and he was working for the first time.

We argued all through my labor. The social worker at the hospital kept asking me questions about our relationship and calling my relatives to ensure I was fit to be a good mother. I was furious.

Eventually I left the hospital and was so happy to be home with my little princess, who was a very chill baby. The bond I felt when she was nursing was something only God could have created. I also had a visiting nurse who gave me pointers, asked me how I was feeling and lightened my load.

He was there for me financially and sometimes he’d try to help out with parenting. But he’d also whine that he didn’t know how to be a father and say that if other women could be mothers without so much help, why not me? After a few months, I kicked him out.

After that I often felt lonely and overwhelmed with anxiety that something bad would happen to my daughter. One time my baby threw up on my last clean shirt. I burst into tears because I was so exhausted, with no one to talk to without worrying they’d think I was an unfit mother.

I tried to reconcile with my daughter’s father one more time about six months after my baby was born, but when I again told him it wasn’t working, he beat me in the street so bad I had to go to the hospital. That got the police involved, and then the social worker at the hospital called child protection.

My daughter was never removed. But when they took me to court, accusing me of neglect, feelings of being unfairly judged came back and made me want to give up. Luckily my lawyer helped me prove that I had not been neglectful, and I was sent to preventive services. That gave me the support I really needed.

I began attending parenting groups at the Lower East Side Family Union, where they taught us different methods of relieving stress, like meditation. At first I was fearful about opening up. But I had fun role-playing with other members how we respond to our children. More than anything, just hearing other women’s experiences helped me feel less alone.

I also started going to church again. I felt calmer having a spiritual routine and community, and I embraced values I had moved away from, including not rushing into relationships. Those values are like my armor because I know how easily I can be sucked into a situation where my emotions are out of control.

DV counseling also helped me realize that those wild emotions I’d experienced in romantic relationships are not normal. I began to realize how important it is for me to feel calm and safe if I want my daughter to feel that way. I also realized that, for me, having many sources of support rather than just one romantic partner is my best protection.

On the Straight and Narrow

Now, a year and a half later, I’m pleased to say that my case is closed. My daughter is thriving and I am spending a lot of time working at Rise. I continue to go to church and to therapy. I am hoping to soon go back to school.

I’m still not sure how my personal life will be in the future. Maybe I’ll get to a place where I’m not so hungry for love that I can trust my emotions. But for now, keeping my daughter and me away from extremes is my most important goal. Having many sources of support is the best way for me to do that.