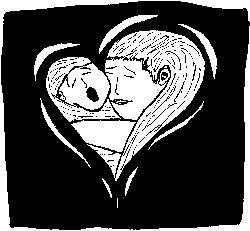 This past summer, another young mother in my foster home got child protective services called on her. That got me watched, too.

The first time it happened, it was 10 p.m. I was in bed asleep with my 2-month-old son. The crib was a few steps away, but I was breastfeeding every two hours and I did not want to keep getting up.

When I opened the door, the investigator was there with a notebook in her hand. She peeked in, wrote something down and said to me, “Hello, Rhonneil. Do you know you’re not supposed to be in the bed with your baby?”

She was perfectly nice about it. But after she left, I felt scared and angry. I thought, “What if she reports me?”

The day my son was born, babies were crying all around, but as I looked at Malachi lying there wrapped in a white blanket with his wondering eyes, and I touched his tiny fingers, all I could focus on was bonding with my baby boy.

When I was 1, my mom left Grenada and moved to the United States. After that, I was raised by my grandmother, who took great care of me. But she died when I was 6 . When I was 8, I came to the U.S. But both my mother and aunt worked all the time, so I was just there with no one to show me any kind of love. I was 13 when I went into foster care.

When I got pregnant with Malachi, I promised that he would never experience the same loss and loneliness.

The Ache to Change

When you’re in foster care, though, you feel watched all the time and you see so many mothers lose their babies.

In one home, my foster mother always used to tell my friend what to do with her baby. She’d open the door and scream, “Lexxi, give the baby a bath.” Lexxi would usually shout back, “She took a shower yesterday, she don’t need to shower.” That’s when our foster mother would say, “You’re being disrespectful.” The worst part is, if you have an argument with your foster parent, they can report you.

Take the situation of a girl I know, Tyesha. One night when her baby was only a few weeks old, Tyesha told me, her foster mother came into her room and said: “You can’t be in the bed with the baby, you know that, Tyesha.” Tyesha got so mad that she started throwing things at her foster mother while holding her baby.

The foster mother reported her and she wound up being separated from her baby for six months.

Then there’s Tiny, a girl in my group home. Tiny was always so depressed. Every day she dressed in the same baggy blue sweats with her head tie on. All she would do is sit at the computer on Facebook looking at beautiful daughter she was separated from, eating White Castle burgers, drinking cranberry juice and crying.

I Got Myself Help

When I was pregnant, I decided that if I wanted to make sure nobody ever took my baby, I’d better go to therapy.

Before my baby was born, I’d get into big fights every few weeks, usually because one of the other girls stole something from me. One time I pulled a knife on a boy who was trying to start a fight with me, and that got me put on probation. Going to my probation officer while I was pregnant is what made me realize I needed to learn to control my anger or I’d be in danger of losing my baby.

I knew therapy could help me, because right after I moved to the U.S., I went to therapy in school. It helped me to have someone to talk to.

But I wasn’t going to speak to the therapist at my agency. If I did, it was too likely that whatever I said would get out to other people at the agency. And I didn’t want to get services from a system that is set up to judge me.

Luckily, my worker at the agency understood and helped me get connected to a therapist outside the agency. That therapist was also a mandated reporter, but I felt better knowing there was more of a separation between her and the system. She helped me calm down my anger and focus on what matters to me: my son or letting out my rage.

‘She Spoke to Me as a Friend’

After my son was born, I continued to get support from outside agencies. I think more of us need help from people outside the system who know how to help young mothers without making us feel judged.

Brooklyn Young Mothers helped me get back into school and connected me to Rise.

A visiting nurse also visited my son and me once a week for the first few months of his life. She made sure my son and I were healthy, gave me practical advice and spoke to me as a friend. She would even watch Malachi for me while I showered.

At the time I felt drained and exhausted. Turning on the hot water, I’d stand in the steam falling asleep. Just having that time to myself made a big difference.