I learned early on that black women are supposed to be “strong” and endure pain in silence. The three years I spent in the military and the 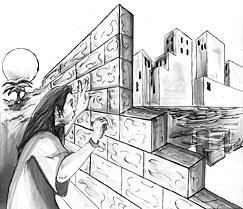 five-and-a-half months I spent stationed in Iraq taught me the same lessons: Be strong. Be silent.

A month after my daughter, Shylah, was born, I kissed her good-bye and flew off to Iraq. When I came home, I brought painful memories with me in the form of Post-Traumatic Stress Disorder (PTSD). I was riddled with anger, self-hatred and loneliness.

The one bright spot was my daughter. Seeing her eyes light up when it dawned on her that I was her mom gave me great hope that I could make things right.

But over the years, my PTSD grew worse. I had nightmares so bad I would wet the bed. Eventually I had trouble getting up in the mornings.

Then one day in January 2010, when I was having a particularly hard time, I slapped Shylah, who was 6. She told her therapist and the therapist called Child Protective Services.

My daughter was in care for six months. Most of that time, I was lucky to see her almost every day.

I also spent six weeks in a veterans’ hospital for women who had been raped while serving their country. There I got to talk about other problems that I’d never dealt with, like being molested in childhood and the rift it put between my mother and me. When I left, I thought I was ready for Shylah.

But when Shylah came home, she would go from zero to sixty having complete meltdowns. When I told her she needed a time out, she would kick, punch and bang her head. When we argued, she would say the most hurtful things, like, “You don’t love me,” or “You never wanted me.”

For about four months, the battles continued. Then the social worker at Shylah’s school introduced me to the Child Welfare Organizing Project (CWOP), a parent-led advocacy organization in New York.

At CWOP I joined a reunification group where we read Rise stories by parents who had reunified. Those stories helped me see that believing in your family’s recovery is the most important thing.

The Mom I Want to Be

I also took a class called the Parenting Journey. There I wrote a letter to my mother expressing the feelings of abandonment that were at the core of my sadness. Writing that letter helped me focus my energies on the mother I wanted to be—a mother that listens, is nurturing and forgiving, and takes responsibility.

With Shylah, I went to family therapy. Over time, I learned that Shylah had cried for me every night, and that she felt blamed for what was happening. One of the hardest things for me to hear was that Shylah felt abandoned by me. Even though it hurt to hear how I had hurt my daughter, I realized all my hard work was paying off when she wanted to hold my hand again, or be held, or, here and there, gave me a kiss.

For a long time I thought my traumas made me strange and unlovable. At some points, I thought I didn’t deserve to have my daughter. My daughter hugs me now for no reason, and it feels glorious. Little by little we’re rebuilding ourselves.