“Girl, you better stop crying,” my grandmother said. I was young. Holding tears back was hard. My throat closed up and my head began to spin. 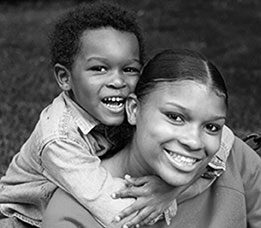 My grandmother was a warrior. She was my soldier. When I was little, everything she did was right in my eyes. I just couldn’t understand why I wasn’t supposed to cry.

In my grandma’s world there was no time for emotions. She raised four children and four grandchildren, and she worked too. My grandma also grew up in an era when colored women had no rights and no voice. Why speak about your feelings if there’s no one to hear you?

My grandma carried the hard stone of not showing her feelings on her back for years. Before I was born she used alcohol to keep the feelings down, and later she just kept all her feelings locked away without alcohol. My grandma explained: “Emotions just give others a chance to take advantage.”

My grandmother didn’t baby me. She didn’t take my hand and walk with me. She sent me the message: “The world isn’t nice, but you can handle it. The world is a jungle. This is only the start.”

But as I grew older, my emotions didn’t want to stay locked away.

As a teenager, I was angry at my grandmother because I didn’t look like the other girls (tall and skinny). I was angry at her because my mother died when I was 2 and my father put me through so many disappointments and she was the only one I could take it out on.

I was angry, too, because sometimes I wanted to be shown some kind of affection, but when I was hurting, all I got was tough love.

Then, when I was 15, I met my son’s father. Nine months later here comes my love child. I was so angry at myself when I realized he wasn’t going to be there for my son. Hadn’t my grandma taught me that life doesn’t give you kindness?

I was strong enough to walk away from him. But I didn’t know how to be strong when my warrior left a few years after my son was born.

Alone With My Feelings

After she got sick, we grew close again. I’d tell her I loved her, and she’d do her best to say it back. She wanted me to show her my high school diploma before she died and promise to get a college degree. She told me: “Keep a smile on that boy’s face and never allow anyone to take him from you. He is yours.”

But the pain of being alone in foster care also made me even wilder. Soon I got myself into the fast life, dancing in the clubs. Hour after hour. Guy after guy. Dollar after dollar. After my grandma died, I felt numb. I felt cold and dry. She left me here just to be all in my emotions. I wanted to apologize for all the fights and hug her one more time. How could she leave and expect me to hold back my tears?

My grandma always said, “No one got me like I got me.” But my grandma had actually always had me. Now she didn’t.

Too Sad to Parent

After that I just drank away my problems.

At the bar, I’d listen to other people’s problems, give them a few minutes of fantasy. I’d drink Hennessey and Red Bull and soon I’d feel less and less there. I went to work around noon and came home at 8 or 9 p.m., sometimes later.

My son was 2, just come into the world, spending all that time with my foster mother. By the time I got home, he was usually asleep and I was drunk. It might have seemed that I wasn’t thinking about him when I left him there like that. But I left him because I was thinking about him. Kids can feel your sadness. I didn’t want to scare him with mine.

I was probably heading toward death or a very bad place. But a few months after my grandmother died, my cousin started to call me. She is 10 years older than me and was also raised by my grandma. She’d say, “Let’s get out and clear our minds.” We’d get our nails done, or have Sunday dinner at her house.

She was very emotional, and that touched my heart and woke me up. She’d tell me that we had each other. I began to share my feelings with her, and I saw that it was OK.

I felt protected again, like I had when I was younger living in my grandma’s big house. I felt like finally someone really knew me. I was her little flower that was blossoming.

I Found a Team

Soon I started going to a support group for young moms at Lawyers for Children, the agency where I had my lawyer. Mary Ellen, the social worker who ran the group, would call or text me after hours or on the weekend just to make sure I was OK.

Talking with the moms in the group made me feel normal. I used to think that something wasn’t right with my thoughts. It was good to know the thoughts running through my mind were also running through other moms’ minds. The group even helped me believe that those of us who have been in foster care could become an elite team of leaders.

There for My Son

By the time I aged out of foster care almost a year ago, I finally felt like I was on the right path but I worried about my son. I tried to give him all the attention I couldn’t give him right after my grandmother died. I’d take him to karate class and read to him. I’d tell him I loved him and he’d repay me with random hugs and kisses.

My biggest challenge was figuring out how to respond when I saw him hurt, sad or scared, because those emotions still scared me. Often it seemed like emotions just brought more emotions. I also feared that as a male he’d be a target if he was too emotional.

So I taught him some of the tough love my grandmother taught me. If he fell, I’d speak to him in an aggressive voice. I’d tell him, “You’re a boy. Boys are going to fall.” I thought that emotions are the only thing you can control, and that I was teaching him self-control.

‘That Hurt My Feelings’

But at 3, my son could also be very aggressive. He was always in defensive mode, ready for a fight. One day my cousin went to hug him and he punched her. He reacted as if she were coming to attack him.

That’s when I asked for help. I went to the Department of Education and had my son evaluated. When he entered pre-K, they got him a teacher just to work on helping him express his emotions. After a while, he started coming home saying, “You made me upset, Mommy,” or “That hurt my feelings,” or “Leave me alone please. I need to think.” My son also began to allow himself to cry from time to time.

Over time the hitting stopped. I felt proud that my son could express his feelings. I saw that it helped, not hurt him. It gave me hope that he’d have the skills to make his way in society.

I still feel afraid that the world will eat him alive if he shows weakness. But I am trying to accept that he is a child, and that it’s OK for children to sometimes be weak. Crying is a way for my son to tell me, “Mommy, I need you.”

Getting help for my son made me want more help. Recently another mother at Rise described a parent-child therapy program where the therapist videotaped her playing with her son, and they watched it as part of the therapy. It sounded great because it was really about her and her son, not about parenting rules. After that, I hardly slept until I found a similar program. I’m hoping it can help me address my own painful emotions and help my son and me feel like a team.

Today I am proud of myself and I am proud of my son. I am Phi Theta Kappa in college, a Youth Ambassador for Lawyers for Children, and a writer for Rise. It makes me happy to hear my son’s outspoken voice and to see his commitment to whatever he is doing.

Writing this story has helped me see how far we’ve come. So many things happened to me overnight that I didn’t know how to manage. But my cousin found me and helped me. After that, I took it upon myself to use the resources around me.