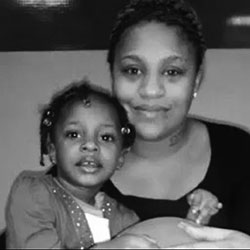 When you spend too much time as a kid in survival mode—feeling like you have no one to rely on and blocking out the pain whatever ways you can—sometimes you don’t realize in time that you have to change.

Alone in the System

I was raised by my grandmother until I was 10, when my mom decided she was done doing drugs and wanted her children. To me, it seemed like one big adventure. But when I was 11, child protective services found us living with my mother even though my grandma still had custody. My brother and I were remanded into care.

I felt like I was all alone in foster care and that I had to take care of my little brother, too.

One night on the way back from a visit, the foster mother was talking about my mother being nothing more than another crackhead. That’s when I decided I’d had enough.

When she went upstairs, I picked up my little brother and ran one block, flagged a cab and gave him my mother’s address. When my mother opened the door I started to cry. My mother was in pain, too. I think she was most hurt that night when she told us that she had to take us back. It was about a year and a half until we were allowed to go home.

By that time I was a teenager, though. I had seen some things and gone through some hurts and the relationship between my mom and me went totally wrong. Eventually she gave me $1.50—what the subway cost in those days—and told me not to come back. My life became a series of crazy adventures. Underneath, I was in pain.

First I was in the streets, then I went to Covenant house, then to a group home. Then I ran away and became a stripper. Everything I was doing felt like nothing. The sex, the stripping, the running the streets were all a means of survival.

At 16, I got pregnant with twins boys. I was happy to finally mean something to someone. For a time, I also found safety. My boyfriend’s sister became my angel and took me under her wing. She was my friend, my sister, my mother.

But when she moved away, life became a whirlwind again. When my twins were about 2, I started using cocaine. At 19, I got pregnant again and moved in with the father, who was also an addict. He was selling drugs but he wasn’t making enough so I prostituted. Pretty soon we were both using crack and he was putting his hands on me. Life was crazy.

It was during that time that child welfare came back into my life. My worker was young, like me, and I felt like she understood me and tried to be good to me. I was living in an apartment with no heat, and preventive services made sure my apartment got fixed. When my son was born, our blood tests came back positive but my worker didn’t take my baby. She gave me a chance to stop.

At first I did. I entered a program. I’d take my baby and they’d feed us. I felt safe and supported. I wasn’t prostituting. I had friends. I had normalcy. I was happy. I loved it there.

But I didn’t last long. Eventually I lost my housing, my boyfriend started hitting me again, I started using cocaine again, I gave my twins to my grandma, and I went crazy partying to forget everything that had happened in my life.

The moment I saw the child welfare van and the cops, I realized for the first time that I was going to lose my children.

I felt like somebody had ripped out my heart. I told myself, “You let it happen. You did it. You’re a prostitute. Your boyfriend smacks you around. You live on the street. At least when you had your kids you were somebody’s mother. Now you’re not.”

I tried to run away but I knew I couldn’t so I went and faced my worker. Because she was my friend she didn’t take my baby out my arms. She asked the officer to take him.

I Learned Too Late

After that I tried to stop using but I wasn’t ready deal with all that had happened in my life. Finally, the courts decided too much time had passed. I had two choices: Either I could give my rights away with the agreement that I could be in my children’s lives, or I could refuse to sign the “conditional surrender” and never see my children again. It broke my heart, but given my choices, I chose to sign.

Today I have five years clean and my husband is my rock. He is the safety that helped me stop running. I also have a child at home, and I continue to see my other children, who were adopted.

Still, I often feel like less of a person because I gave my children up. My biggest regret is not being able to be their mother. When you don’t know anything but running, sometimes the hardest thing in the world is learning how to stop.