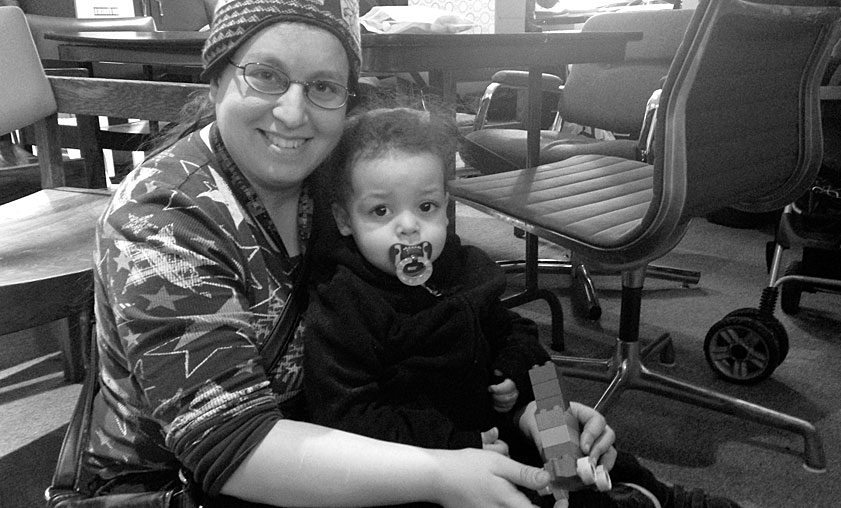 Magic really does exist. Magic is when you hear music that makes you laugh or cry; you feel it deep within your soul. Magic is also when you read a book that makes you feel like you can go anywhere and do anything while you stay safe and secure.

Magic is how you view the world. It’s walking in a garden and observing the beautiful flowers and magnificent trees, and seeing how soft and alive the grass feels under your feet.

Magical is how it felt recently when I went to a camp for adults who are part of a mental health program. Swimming I felt young and free. I also loved walking around and finding places where I could be quiet and meditate. I sat near the lake on a bench, or lay on a hammock connected to two trees, reading a book or staring up at the trees and sky. I felt more relaxed than I’ve ever felt.

My daily life is often worries and stress. My son Aaron is in foster care, and I am working to get him home. I spend a lot of time seeing doctors and therapists, filling out paperwork and going to court. I fear that I have to do everything perfectly or I won’t get my son back. I worry about whether I’ll get to my appointments on time. I worry about gathering letters for court and what they will say.

Everything I’ve done to get my son home has required me to talk to people and advocate for myself, and that’s been hard. I have schizoaffective disorder and I’m terribly afraid of being judged. In the mental health and child welfare systems, people do tend to use what you say against you. I’m learning to speak up, though. I need to prove that, if any danger or difficulty comes up, I can speak up for my son and me.

Now I’m getting close to reunification because I refuse to give up. I have completed a 26-week parent-child therapy program, DV therapy and visit coaching. I go to therapy every week. The only obstacle to getting my son home is housing.

The Magic of Mothering

Sharing magical moments with my son keeps me going. I have visits with Aaron from 11-5 on Mondays. Aaron has brown curly hair to match his brown eyes. He loves music and building blocks. He learns new words every day. I like hearing that he can say: “Mommy, Mommy!” “Yes, Aaron?” “I want apple juice.”

The more time I spend with my son, the better I am able to care for him. I learn what he likes and what he doesn’t. I know his favorite foods. I know that he loves Elmo and playing ball.

Aaron also likes his pacifier. He likes when I take his pacifier and run it under some water. He even reminds me to wash bobo. Sometimes I pick him up by the sink and I let him wash it himself, which he likes, too.

Aaron was removed two days after he was born because I’d already had a daughter and had voluntarily placed her in foster care at 3 months old. Their father was abusive, and I thought she would be safer. Now she is adopted.

When I was five months pregnant with Aaron, their father threatened me, and at that moment I just stopped feeling afraid of death. I started screaming, ran out the door and signed myself into the nearest hospital.

For two days after Aaron was born, I held, fed, burped and changed him. It was one of the happiest times of my life. Then I was told that I couldn’t take my baby home. I was devastated.

When I started visiting Aaron, I felt that I might not be doing the right thing by trying to get my son back. I thought Aaron might be safer if I let the foster mom adopt him, and he was thought to have medical problems that might be complicated to handle.

Spending time with Aaron in parent-child therapy at the Albert Einstein Infant-Parent Court Project helped me change my mind. I realized that I love being with my son and caring for him and I’m capable of it.

Aaron and I spent time each week with a psychologist named Hazel. Hazel’s office was small with a colored playmat and shelves of toys and books.

I picked out the toys when Aaron was small. When he could stand on his own, it was fun watching him take every toy and book off the shelf. Then I had to get him to help me clean up. Hazel showed me how to play the clean up song to get Aaron in the mood.

When Aaron got upset because he couldn’t take the toys home with him, I learned to tell him, “Don’t worry, you can play with the toys next time you come here.” Hazel also taught me how to calm him and distract him when he was getting changed.

I always thought that I had to be perfect. I grew up in an Orthodox Jewish home, wearing long skirts and long sleeves, being sheltered. In my teens, I rebelled. I smoked, drank and ran away a few times. I was also seriously depressed. Then, after my father died, my brother kicked me out of the house, and I bounced between hospitals, shelters and the streets.

I thought that in life you are either at the top or at the bottom, right or wrong, with no in between. Hazel taught me that it’s OK to not be perfect. When Aaron accidentally tripped and fell, Hazel taught me not to blame and be mad at myself. Life has very much improved since I realized that there is a middle ground and there’s no shame in being there.

Hazel said she was so proud of me because I had learned that I could let Aaron be more independent while also being there to catch him if he falls. I could let him go over to the toy shelf, pick out his own toys, and even play on his own. I saw that, after playing a bit, he would come over to me for a hug and reassurance before going back to his toys again.

Getting to Know My Son

Now I find so much magic in the time I spend with Aaron. Recently we took the 41 bus to hang out at Fordham University, which has a spacious campus near the foster care agency. We walked around and then sat down in Starbucks to read his Elmo book. He told me the colors—red, blue, green and his favorite, yellow, which he pronounces “lellow.”

As we walked, I held his soft, little hand. I picked him up so we could cross the street. He didn’t like that because he wants to walk, so as soon as we crossed I put him back down. When he got tired, I picked him up and he lay on my shoulder, making sucking sounds with his pacifier.

Our most magical day was at the Bronx Zoo. It was a really nice day with a comforting cool breeze blowing. Aaron was a little nervous on the bus. He was holding me really tight and closing his eyes on my shoulder.

At the zoo, everything was expensive. But it was worth every penny. I was thinking of the zoo trip as a gift for Aaron, but I found myself having a lot of fun, too.

We looked at the zebras, the giraffes, hyenas and flamingo. I felt as if I had jumped into one of my fantasy books. The hyenas were really scary and the flamingos were fascinating.

After lunch we went on the bug carousel. Instead of horses, the kids ride bugs. Aaron loved this so much that we went on two times! Leaving the zoo, then Aaron took a short nap while cuddling with my Spiderman sweater as if he were holding a teddy bear.

Back at the foster care agency, I felt like crying. It’s really hard to be without my son.

In between visits, I keep myself busy preparing for his return. I buy toys, books, games, movies, diapers, wipes and anything else he might need. I also put money to the side for him a little at a time.

This year, the holidays were especially sad and lonely. I was alone a lot. Being alone without much to do is really depressing. A cold also kept me in bed for a few days and I had to cancel one of my visits because I thought Aaron might get sick. I felt as if some of the magic I’d been building up might be leaving me.

Forcing myself out of bed to go see the Christmas tree in Manhattan with a group from my supportive housing program turned out to be just what I needed to start to climb out of my hole.

The magic of the trip wasn’t just the beautiful sights and decorations, it was also the friendship and my courage in trying new things. Heading home, I felt as if someone let down a ladder for me to start climbing back up.

With my renewed passion and excitement, my cold getting better, and the encouragement from some good friends, I started to feel the magic again. I told myself, “I know I will be OK and I can look forward to my next visit with my son.”

Sara’s son returned home on a trial discharge in February.