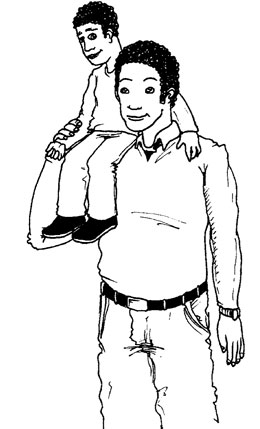 Six years ago, I got into an argument with my wife when she was pregnant. I wanted her to quit smoking, she wanted me to quit drinking. She told me, “My smoking doesn’t affect our relationship as much as your drinking.”

Things got out of hand and she called 911. I was mandated to go to a domestic violence batterers class, drug and alcohol abuse groups, and parenting classes. I was angry but I learned to accept that I chose to go, in the sense that I got myself into a predicament where I had to go.

In the groups, listening to other people talk, I thought, “I could lose my child, my wife, my job.” I felt tired of the arguing, of never feeling good and never making others feel good about themselves. I thought, “It’ll be so much easier to do the right thing.”

Now I’m part of a group in Colorado Springs called Men Against Violence and Abuse (MAVA) that started two years ago. We’ve spoken at community meetings, the community college, the sheriff’s office, a domestic violence summit—anywhere that wants us to come and tell our stories. The way I see it, laws are changing, and we need to give men the tools to change too, not just tell them, “This is not right.”

The Tools to Change

Sometimes people think it’s really shocking what comes out of my mouth, that one person can treat another person that way. People ask, “Why did you change? Was it hard?”

In the batterers’ group, I learned about things like taking “timeouts” when you get angry, having empathy and sympathy for other people, and showing love in a relationship. I learned that other people have feelings and what you do affects them, which is something I didn’t really understand from my childhood.

My dad was physically abusive, and my mother was not around. When he came home, you feared what you did wrong or didn’t do. I grew up in rural Illinois and it was a hush-hush situation. Things weren’t spoken about, people turned their eyes away. Now I see that as wrong. I prefer to help and speak up.

In the groups, I learned that you have to feed a relationship, you can’t just go home and sit on the couch and expect to have sex. My idea of the relationship was that my spouse would cook and clean, and I would just to stay in power, take care of bills and get groceries.

I learned “romance tools”—things you do to build a connection with your partner. My wife and I started taking weekend trips out of town, and that helps out. I also changed my attitude toward her doing things without me. If she wants to see her family, I say, “I’ll see you when you get back” and make it known that I’m not going to be mad.

When I told her I loved her before, I was kind of saying it without meaning it. Now she can actually feel it. Helping out around the house isn’t, you know, a big thing, but it shows that I’m listening to her say “I had a long day” and that I care enough to do something nice, like cooking the dinner or cleaning up.

The hard part was remembering to use these tools and not revert to abuse or even certain looks or verbal tones. It meant stopping all the things that came easy. Once you figure out how the cycle of violence works and start catching your anger earlier and earlier, you can get what you want—and even more—just by being nice to someone.

‘There Is Another Way’

At MAVA, we tell our stories, and give out information on domestic violence. We’ve probably gotten about 200-300 pledges. Men fill out the card with our mission statement on the back: that we’ll hear women’s and children’s voices, refrain from abusive activity, refrain from abusing ourselves, and stand up against violence.

I hope people hear that there is another way besides abuse. I didn’t realize that controlling the finances was abuse, or that telling my wife she couldn’t go somewhere was abuse. I looked at it as, “That’s my wife, she should listen to me.”

I’m sure my son has benefited from the changes I’ve made. I don’t remember my dad telling me he loves me. When I drop my son at daycare, I make sure to tell my son I love him and to kiss him goodbye. My son hugs people, he knows how to show affection toward others. Hopefully he’ll remember these lessons when he grows up.