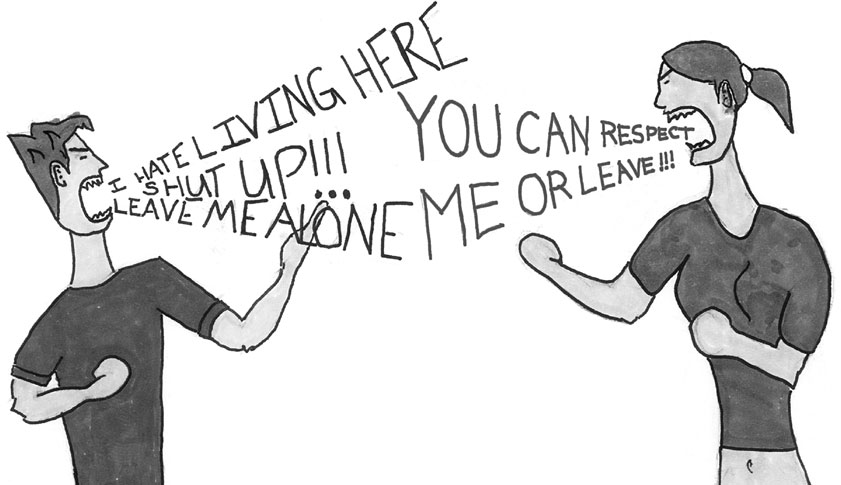 On December 8, 2000, my 15-year-old son was discharged into my custody after spending a long time in a residential treatment center. I thought everything would be good. I had wanted him to come home for so long. But his anger soon overwhelmed me.

My children were taken from me when my son was 5, because of my drug addiction. In foster care, Luis’ anger just grew and grew. He was angry at the system because he was separated from me and from his siblings. And he was angry at me because he depended on me and I let him down.

I said I would never be like my own mother, who’d neglected her children out of frustration with my father, an alcoholic. But trying to hide the scars of my past, I slipped and allowed myself to fall deep into a life of drug abuse, which in turn hurt my children.

While in care my son was fighting and threatening kids because that anger kept growing. But at 13 he began to calm down because I was finally succeeding in conquering my drug addiction. He realized that if his behavior improved, he might have a chance of coming home.

He started following the rules at school and he and I attended family therapy, too. His anger was the topic we discussed most of the time.

For the first few months that my son was home, everything did seem OK. But then, suddenly, Luis became very rebellious. He felt he could stay home, not attend school and smoke marijuana. And his anger was explosive. He would push holes in the wall and destroy property in my home. Even when he stayed to himself, I could feel that he was about to explode.

When I tried to tell Luis that he couldn’t keep behaving this way, he didn’t listen. Maybe he thought he had come home to the same old mother he knew before he was taken from me, the mother who got high and allowed him to do whatever he wished.

As our home became crazier and crazier, with yelling and even some physical fights, I began to feel very guilty and very angry at my son for not letting me be a parent to him. I felt devastated.

My main concern was that my boy was riding on a path to devastation. I wanted to tell him about the many times I put my life in danger as a teen just to get back at my own mother.

I was angry at her and I wanted her to feel pain, and the only way I knew how to do that was to make myself suffer. So I’d stepped into the streets to see all that life had to offer and got caught up with some wild kids who were dangerously violent at the sound of a heartbeat. I didn’t want my son to suffer like I did because he couldn’t deal with his anger at me.

But he wasn’t going to hear a lecture from me.

Eventually my son’s rebellion had me so overwhelmed that I thought the system might be the only answer. I was afraid he would think I was giving up all hope in him, so I didn’t ask for my son to go back into care, but I did tell the caseworker honestly about the problems we’d been having.

Eventually the authorities came on their own to pick him up because of his failure to attend school.

As he walked out the door, I held back painful tears and sorrow. I stopped Luis as the worker was taking him and said, “Luis, I love you and I’m just trying not to allow the streets to take control of my son the way it took control of Mommy.”

As I watched out the window, I thought he might glance at me but he didn’t. I understood. What was happening to him was his worst nightmare. It was mine, too. It felt like my past was repeating itself and I was losing one of my babies to the system once again. I just hoped that one day he would forgive me.

Then one day, after Luis had been in care a few months, the social worker called. My son had gone AWOL. I felt heart-broken. I felt like I was losing my son more and more.

A short time later, though, he showed up at my house. I kept trying to talk some sense into his young mind. Finally he said, “Mom, I respect what you are saying, but I still will not be returning to the system. I am going to take care of myself.”

A month and a half went by without a word from my son. Then one cold night he appeared at my friend’s house. I saw my son dragging his body up the stairs. He was so exhausted he seemed intoxicated.

The feelings that came over me made me stand still, numb, not knowing what to say to him. I just stared and had a flashback of my own life as a young girl in the streets.

My son said to me with a staggering voice, “Mom, I love you, I miss you. Do you love me? What did I do wrong?” He kept repeating these words over and over again.

Then he said, “Can I have a hug?” I held him close to my body and embraced him as I cried silently, holding back tears.

I wanted to help my son, but I didn’t want to take him back without any promises that he’d change. So I asked Luis to come upstairs and I asked my friend, “Please talk to my son, I cannot stay. I have to go.”

‘I Have Faith in You’

About a week later, I received a call from the preventive worker that my son had requested a meeting. When I arrived, he said to the worker, “I want my mother to give up all her rights to being my mother.” Then he turned to me and said, “So what will it be?”

I replied, “My son, my rights will terminate the day I die. Until then you are stuck with me.” After that, he stormed out of the office.

A couple of months later he had a court date scheduled. I did not expect him to show up, but then I heard him whisper behind me, “Mom, is it over? What did the judge say?” I looked back at him and he looked frightened.

The worker turned to me and said, “Remember, be calm. Tell him how you feel and what you would like from him. I have faith in you.”

I asked Luis if he wanted to walk alongside me to Chinatown. He agreed.

At first he only said a few words here and there, but after a while he broke down and told me what he was up to and of course it was no good. The most painful piece was when he confessed he was sleeping on the train, with no place to go and no one to turn to, just the negative associates he met along the way.

This time around, I decided, my son and I were going to make it work, even if I died trying.

Getting to Know Each Other

He came home soon after, on March 4, 2002. For the moment, our relationship is better and so is his behavior. Every night when he comes home we talk about how his day went. He says he’s working helping out a friend with cars or distributing fliers.

I’m not sure I always believe him. He might be, but he also might just be playing around with his time. Still, we’ve made an appointment for him to start a program to get his GED and to get drug counseling, and I hope that will give him some structure in his life.

In the past, when he left his stuff around the house, I’d get mad, but now I’ve learned not to be bothered. When he breaks other rules, like coming home late or smoking pot, we talk about it and usually he apologizes.

After doing some soul-searching, I’ve also had to realize that there’s a huge gap in our relationship created by those eight years that my son was in foster care. When parents and children are reunited, both sides have to face more than they bargained for.