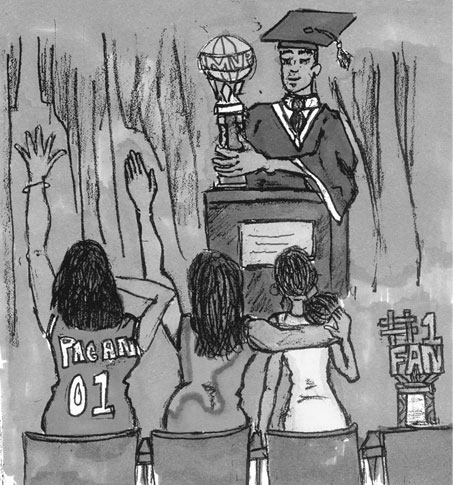 My son Louie has been a good kid ever since he was small. He rarely complained about anything. He was one of those toddlers that clings to the mother. Wherever I went he was there. Summers when I was outside playing spades, my son was curious so he kept pestering me until I taught him how to play. When we were short, my son would fill in.

As he got older, Louie loved basketball. He filled his room with posters of Michael Jordan. His dream was to become a great basketball player.

Then, when Louie was 12, some terrible things happened in our family. We found out his younger sister was being sexually abused by her father during weekend visits. Louie became angry. He blamed me because, as he put it, I allowed the courts to give her father visitation rights.

Even therapy did not seem to help my daughter. Seeing her suffer without knowing how to help her recover, I got stressed out and began to drink.

When I began drinking, Louie kept away from me. My son shut me out so he could take care of himself. I became aware of his feelings toward me when I realized he didn’t introduce me to his friends anymore. In my stupor, I felt angry at him, not sad.

Louie would ignore me and go outside to play basketball with his friends. He would never invite his friends over because he didn’t want them to see me drunk. He wouldn’t return to the apartment unless he knew that I was passed out. He rarely spoke to me when I was awake. My son was ashamed of me and the way I was wasting my life away.

Despite everything happening at home, Louie kept himself focused. He always attended school. (Looking back I realize that school was an escape route for him.) When my children were removed and placed in foster care, Louie stayed with my sister and never gave her any trouble.

While he lived with my sister, Louie would only come see me when I was sober. Then he would ask me, “When are you going to get your life together?” or, “When am I coming home?” I would respond with, “One of these days.” I figured I didn’t have a problem. I felt I was having fun and he wanted it to stop.

Back in His Life

Finally I went to rehab and got my act together, so Louie began to allow me back into his life. The day I came back from rehab, I saw Louie outside hanging out with some friends. As soon as he saw me, he ran to me, hugged me and introduced me to his friends. I knew right there and then that he was meeting me halfway.

Soon after that I decided that it was time for me to express my regrets to my two older children, Louie and Rosemarie. I sat with them and told them, “You know I love you all, but I was not myself while under the influence. I know I must have embarrassed you while I was drinking and you probably hate me for that. I can’t make up for the lost times but I would like a chance to make it up to you guys. I’m really sorry for what I’ve put you through and I promise I will work hard not to let alcohol come between us again.”

Rosemarie said, “Mom, I understand why you went there and I feel your pain. Let’s try to start a new OK.” Louie did not say much only “Don’t let it happen again.”

Later on Louie let me know how upset he’d been with me. He came to me one day and expressed to me the anger he’d been feeling all those years. He said things like, “Now that you’re sober don’t go messing up like before. Don’t lose this apartment or the girls again.”

Soon my son began to trust me and let me learn about his life. He had a girlfriend that he’d been dating since junior high school. I didn’t even know about her, and Anita didn’t know Louie and his sisters were in foster care.

The first time I met Anita was at a street fair. It was the Puerto Rican Day festival on 116th st. I was talking to some friends when my son asked if I could take a walk with him. I said, “Sure.”

We went down the block and I noticed a very pretty young lady just standing there. We approached her and Louie said to me, “Mom, this is the love of my life, Anita. Anita, this is my wonderful mom.”

She hugged me and gave me a kiss. I felt weird because my son was in a serious relationship and I’d missed it. He’d already been dating Anita for two years! But when he introduced us, I knew my son was proud of me for turning my life around.

One day Louie asked me if I could attend one of his games. I said, “Sure.”

That Friday I got all dressed up and went to see him play. My son played a good game. His school won. Afterward, he came to me all sweaty and hugged and kissed me and introduced me to some of his friends. That was a good feeling.

Then my son’s high school graduation came up. Louie’s father came from Florida to attend. His sister Rosemarie asked Louie for his basketball jersey and she took it in and made it into a short dress. All of us attended the graduation – me, my two girls, my grandson and Louie’s father.

During the ceremony they gave out a trophies. The first went to the best spectator who attended all the basketball games—that was Anita. The second trophy went to the MVP and best player—Louie!

My son’s determination has also inspired me. Last year I decided that I wanted to do something to better myself. Louie keeps a steady job, and I wanted to work, too.

I joined an organization that helps parents advocate for themselves in the child welfare system. Then I applied for a parent advocate position at a foster care agency. After the interview, the lady told me I was hired. I felt numb and still feel numb. But I was calm enough to tell my son about it.

I called him and told him, “I got hired!”

“I want to hear about it tonight,” he said.

I’m happy that I can make my son proud of me because I’m so proud of him.