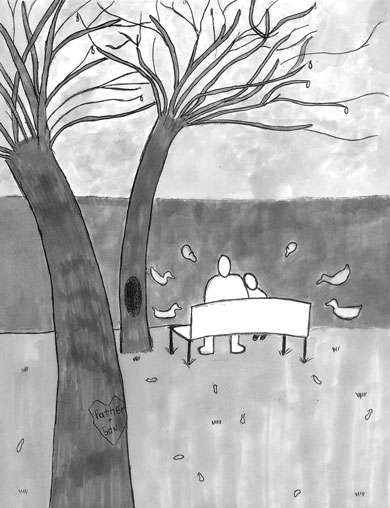 People say there are no real men with real fatherly love for their children, or that a father can’t have the same bond with his kid that a mother has. When I hear people saying that, I tell them this story about my son and me, and the best and worst days of my life.

The best day of my life was when I was 21 years old and I found out that my girl was pregnant. I especially liked how she told me. She and my sister were going back and forth to the bathroom. The last time, she came out with a pregnancy test in her hand. She gave it to me and said, “This is yours.” I was excited, but I said, “How do you know this is accurate?” She had a second pregnancy test in her hand, and that was positive too. Everybody was happy, especially me.

Determined To Be A Father

But about six months after my son was born, his mother and I broke up. We’d been together for almost five years. She swore up and down that I was cheating on her, even though I was not.

I was upset about the breakup. I wanted to stay involved in my son’s life and worried that the breakup would make this difficult. My father was always there for me. Even though my parents separated and my mother remarried, he didn’t stop him coming to visit my older brother and me.

My girl decided that she would take our son during the week and I’d take care of him on the weekends, which was cool for both of us. It showed me that two parents can agree on something if they really care about their child.

‘Come Get Your Son’

Then, five years later, came the worst day of my life. Last April my son was placed in foster care.

One day I got a call from a hospital saying I needed to come down and get my son. Once I got there, a hospital worker told me to go to the local precinct. The precinct told me to go back to the hospital.

I started feeling that I was being played with and I got frustrated. But I stayed calm and just kept asking, “Where is my son?” Finally, I found out he had been put in foster care.

It turned out that my son was placed in care because his mom had gone to the hospital feeling sick. She passed out, and the hospital couldn’t reach anyone to pick him up because my son didn’t know my phone number.

I was twisted when I found out what happened, because it took two days for the system to put me in touch with my son and because ACS wasn’t returning my son to my ex. The ACS worker told me, “A good parent, knowing she was not feeling well, would not have brought her children to the hospital. A good parent would have made arrangements for her children to be babysat by a friend or relative.” Sure, that’s ideal, but sometimes you got to do what you got to do.

During those two days without my son, I couldn’t sleep or eat. Not knowing what was going on was hard. My family and friends comforted me and prayed for my son’s safe passage through this hell. My son’s mother was equally anguished and she worried I’d be angry at her. But I wasn’t. She did nothing wrong.

When we went to court, the judge decided to keep him in foster care instead of sending him home. That made no sense to me, and knowing how some foster parents can be, I worried that he might be mistreated in the system.

I asked the judge if I could take my son, but ACS wanted a lease showing that I lived in my own apartment. I lived with a new girlfriend and my name wasn’t on the lease. They said I couldn’t bring him home. Finally, they allowed my mother to take him. At least I could see him often.

That day I went to pick my son up from the agency. The first thing he asked me was, “Why didn’t you pick me up?”

I felt so bad. I told him, “I didn’t know what was going on. But I never stopped looking until I found you. And I’m picking you up now.”

He stood there looking at me with a stare that his mother used to give me and said, in a nice way, “OK.” It felt good to hear him say OK. He believed me. My fear was that he’d think we abandoned him.

I Do Whatever It Takes

My son has been in foster care with my mother for a year now because his mother has to complete parenting classes and other requirements. Until she completes them, she’s just another bad parent in the system’s eyes.

I’ve helped my son by being there for him physically and mentally. I wake up at 5:30 every morning so I can go to my mom’s and get him ready for school. Then I go to my part-time job and by 2:30 p.m. I’m back at his school to pick him up.

Back at my mother’s house we do his homework and, if the weather permits, we go outside to a park. My favorite is Central Park because we get to feed the ducks. It’s also his favorite because we take the subway.

My son loves riding the train. He likes going to the first car and watching the motorman drive to each station. He likes it so much that I got interested in trains, too, and recently took the test to drive them. Whatever it takes to ease the stress that has been placed on him, I do.

I would never choose anyone over my son or his mother anyway, so it didn’t bother me. As a father, I had to put my son first, and if it meant losing my girl, so be it. I’m proud of the decisions I’ve made.

In the last few months, with the court’s permission, I’ve started bringing my son’s mother up to visit him at my mom’s house. His mother also shares in day-to-day decisions that I make for him. She and I have gotten closer, too.

I’m so proud of my son because I found out that he’s a survivor. The last year has probably been real traumatic for him, but he still stands strong. My son doesn’t ask to go home. And after visits with his mom, he doesn’t act out or do anything negative. I think that’s because he understands that whether he’s at his mom’s or with me, he’s always home. We’re all family.

Soon my son will go home to his mother. That’s a good thing. He misses his mom and he belongs with her. I can’t wait for that moment. That definitely will be a cause for celebration.

I know that my relationship with him will be strong forever, even when I don’t see him every day anymore. It’s been amazing seeing how he’s been growing up.