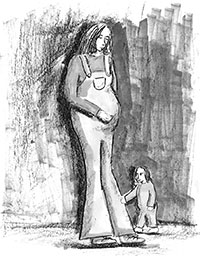 When you’re addicted and find out you’re pregnant, it can feel like there’s no good way out. If you ask for help, you can wind up being accused of maltreating your baby. But if you don’t ask for help, you aren’t doing all you can to make sure you’re ready for your baby.

In December, the New Jersey Supreme Court ruled in favor of an opiate-addicted pregnant women called Y.N., who followed her doctor’s advice and underwent methadone maintenance during her pregnancy but was charged with neglect when her baby was born. In its ruling, the court said Y.N. couldn’t be charged even though her baby suffered side effects from methadone at birth, because she was trying to prevent worse harm to her baby. This ruling gave hope that if pregnant women struggling with addiction get help, the law will support them. I hope other states will follow New Jersey’s lead.

Rise interviewed Diana Autin, executive co-director of New Jersey’s Statewide Parent Advocacy Network (SPAN), and Sean Marotta, an attorney with Hogan Lovells who worked with SPAN in this case, about what the ruling means.

Q: Why are opiate-addicted pregnant women sometimes charged with maltreatment for following their doctor’s orders?

Autin: When women who are opiate abusers become pregnant, they have limited options. They can continue to abuse opiates—like heroin or prescription pain killers like OxyContin, Vicodin, or Percocet—but that can cause great harm to the fetus. They can quit cold turkey, but that can cause even greater harm to the fetus. They can have an abortion. If they want to take their baby to term, taking methadone is the best way doctors have to ensure that babies are born safely.

Marotta: But because methadone is itself an opiate, babies often suffer side effects after birth, including fever, diarrhea and even seizures. Even though those symptoms can be treated, the baby may have to remain in the hospital for many weeks, sometimes in the NICU. No one would ever wish that on a baby.

The problem is that child protective workers and judges look at the harm done to the baby and think, ‘Of course that mother has to be held accountable.’ They don’t step back and realize that what they’re seeing is a mother making the best of a bad situation.

I also believe many CPS workers and judges think of drug use as a moral failing, and so they treat a woman using drugs as a bad person, not someone struggling with a disease.

Q: The New Jersey Supreme Court said in its ruling that charging mothers with abuse or neglect for following a doctor’s orders during pregnancy discourages other pregnant women from getting help. Why is this ruling so important to you and the women you serve?

Autin: We believe that when parents and pregnant women are in difficult situations, they should feel like they can get help, not that they’re going to get punished for doing the best they can.

At SPAN, we work with pregnant women with substance abuse problems and other life challenges to improve birth outcomes and reduce birth defects and developmental disabilities. What the ruling means for us is that we can continue to connect these mothers to resources that help them without being afraid that that can lead to them being identified as an abuser, or lose custody of their child. If we were not able to connect these mothers to primary care providers or other supports without running those risks, we would be in a very difficult positon.

In reality, just because a court has ruled a certain way doesn’t always make people behave consistently with that ruling. What we need to do now is make sure doctors, lawyers, child protective staff and all child welfare local and regional offices are aware of and understand this ruling. We’re also sharing the ruling with the network of organizations that serve pregnant women in difficult situations so that they’re educated and can educate the women they serve. The more that people know about this ruling, the safer pregnant women seeking treatment will be.

We have also shared this decision with other family organizations around the country. We hope that when similar kinds of issues arise in those states, this ruling will help them advocate for their state to have a more nuanced and productive approach to pregnant women who are using drugs.

Marotta: Women in New Jersey do need to know that under this ruling, they are required to be active participants in their treatment process. That means fully disclosing all the necessary facts to their doctor, and following the doctor’s advice in a timely way. But if they do that, then the law should protect them.

For pregnant women who are using drugs and want to give birth, getting help from a doctor is the right thing to do. We hope this ruling means that women are safer doing that.