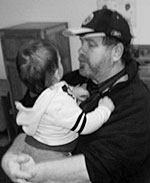 When my grandson was 5 weeks old, he was a bubbly little baby boy, living at home with his parents and grandparents. One day he was not feeling well and had a slight temperature. My daughter and son-in-law took him to the hospital. While being examined, the baby let out a horrific scream. The x-ray showed he had a fractured femur—his leg was broken and we didn’t know how it happened.

An unexplained injury has to be dealt with by the state. We live in Oregon, so my grandson was taken to a major hospital in Portland, the state got involved, and they took the child and put him in foster care.

It’s very hard on families to have a child taken. It’s difficult to explain the feeling. Whenever a person in your family is having a baby, you anticipate the child’s arrival, and the child changes your whole life. When our grandson was taken, there was a hole that was just empty. Suddenly, poof, he was gone. I don’t want to say that it’s like when a child dies, but it was very close to that. He was gone.

I did a lot of internet searches. I came across doctors, lawyers, support groups, and a great Facebook group for families of children with rickets. I also found Rise. I liked that Rise allows people to tell their stories, and it seemed like Rise really cares about people going through these situations. One story in particular dealt with the loss of the child, the emptiness and confusion, and the rage.

In our situation, I understood why child welfare got involved; they had a good reason to investigate. I know that people abuse children. But what I didn’t expect was that the system seemed more interested in proving abuse and getting compliance than finding out the truth. It should’ve been: “Let’s find out what went wrong for this child.” But it was just, “We believe you did this. You have to do these things.” I wondered, “Why do they hate us so much that they don’t want to listen to how this could have happened?”

You’re powerless. I mean, they have a lot of power. They had my grandson. Unless it has happened to you, you really don’t feel the control they have over you. It took 17 months to get my grandson home.

Now I’m writing my story for Rise. My motivation is exposure. What happened to us was wrong. I want other people to know that there is a way to deal with child protective services, and you don’t just have to fold your hands up and say “OK” to everything they ask. We got a lawyer. We hired experts. We challenged the state on their science. But it was hard to get information. It was frustrating.

People think, “That could never happen to me,” but it can. It does. I’m writing my story because I want people to be educated.

My grandson is home now. When we first got him back we worried about him because the only word he knew was ball. (His older sister, who was home with us the whole time, had been further ahead at 18 months.) While he was in foster care, he wasn’t getting the love that helps a child grow. But he’s doing well now. God, he’s awesome– a cute little bugger, inquisitive, a bright little 3-year-old boy.