This summer, Justice for Families (J4F), a national alliance of grassroots organizations working to change the juvenile justice 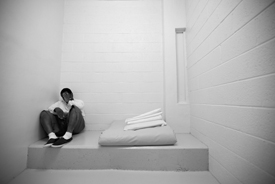 system, published Families Unlocking Futures, a report by and about parents whose children are caught up in the juvenile justice system. The report argues that parents need to be seen as part of the solution, not part of the problem.

Grace Bauer, co-director of J4F, has been fighting to change conditions for incarcerated youth for the past 13 years, ever since her 14-year-old son was locked up in Louisiana’s infamous Tallulah Correctional Center for Youth [see her story below]. Here, Bauer describes the changes she’s seen in the juvenile justice system over the years, and the demands in J4F’s most recent report.

Q: What changes have you seen in the juvenile justice system since you first began your work as a parent advocate?

A: In Louisiana, where I’m from, kids still come to court in orange jump suits with handcuffs and ankle cuffs all strapped together in a line. It seems to me that there’s something wrong with treating a child like a criminal at such a young age.

But there have also been significant changes in the last decade in the way that states approach juvenile justice, and a significant drop in the numbers of children confined to the sort of institutions that my son was in.

In part, that’s a matter of states being strapped for cash, and reform advocates really taking advantage of that opportunity to show states that they could be offering community-based services for cheaper with much better outcomes.

In Louisiana, Families and Friends of Louisiana’s Incarcerated Children went from a handful of parents who could all fit into one living room, to an organization with thousands of members strong. In 2003, FFLIC was pivotal in passing the most comprehensive piece of juvenile justice reform legislation in the nation. Almost overnight the number of kids in state secure care dropped from nearly 2,000 to less than 500. Money was re-invested into services for kids across the state. The state’s infamous Tallulah facility, where my son was confined, was ordered to be forever closed to young people.

The juvenile justice system is also changing because of research from the last decade that shows that teen brains are different from adult brains. A Supreme Court decision, Roper v. Simmons, ruled that adolescents should be treated differently than adults, and a report from the Center for Disease Control concluded that trying youths as adults and housing youth in adult facilities makes it more likely that they’ll be locked up again, and makes kids more likely to end up in prison again with more violent crimes.

Ten years ago, society was much more likely to think that kids in institutions had to be there to protect public safety. The reform movement has been successful in sending the message that we are incarcerating many children on very minor offenses and that we could offer them better services in their communities for much less money.

Q: How did you develop the idea for a report about parents and by parents, and what messages did you want to send?

A: We felt there were a lot of misconceptions about families whose children are involved in the juvenile justice system and we wanted to set the record straight. Over time what evolved was not only a report about families, but a plan in which families would actually do the research. We worked with about 3,000 families across the country. We paid families a stipend to do focus groups and administer surveys. After a writer helped form the skeleton of the report, families were wonderful about providing personal stories to fill in the missing pieces.

The first message we wanted to send is that this is a system of social control that’s targeting people of color. The research says that all kids, of all classes, of all ethnicities, are committing crimes at just about same rate. But when you walk into a prison facility for kids, overwhelmingly you see kids of color.

We also wanted people to know that it’s not just a few kids. There are 2.2 million kids arrested every year, and 1.7 million kids formally processed. If you look at a report by the Annie E. Casey Foundation, “No Place for Kids,” you’ll see that the data is really staggering.

The other message we wanted to get out is that what you think about families of children involved in the juvenile justice system is wrong. You’re viewing us as part of problem, but we’re actually part of solution. Our goal now is to create a center to train more parents to become leaders who can change the system.

Other child-serving systems, like the mental health system, the education system and the special-education system, have all been including families in the work for much longer. The juvenile justice system is very late to come to that path.

Some places are farther along than others. Pennsylvania is doing a good job helping parents learn what resources they can turn to for help so their children don’t end up in a facility. In Connecticut, when a child gets involved in the juvenile justice system, everyone in that child’s life, from the family, to the pastor, to school personnel, comes to the table looking for a way to keep that child in his own home and his own community.

In New Zealand, families are actually left alone to make decisions. Then the family comes back to the case review team to decide whether the family’s plan can work or what they need to make it work. That’s about putting the power back into the hands of the people who know the child best, rather than the state taking all the power away to raise that child.

Q: What has the publication of this report meant to you?

A: I’ve been working with families for over a decade now and I’ve heard stories from parents from all over the country. This report is the culmination in black and white of so many thoughts that have been in my head so many years. Monday afternoon after the report came out, I realized that a weight had been lifted off my shoulders. There’s finally something out there that says, “This is what’s happened to us. This is how your policies and laws have been hurting us and destroying our communities.”

I’ve been at the table for so long, but after the report came out, I also realized that there’s new parent leadership that’s able to go to the table now.

Now we’re meeting with local governments, state governments, judges and advocacy groups. We’re using the report to educate them about the barriers families face to helping their children once they become caught up in the juvenile justice system.

And we’re using the report as an organizing tool to engage more families in the movement for juvenile justice reform. We’re presenting it all around the country. We’re hoping that people will use the family bill of rights that comes at the end of the report as a guide in demanding that counties and states do a better job with our children.