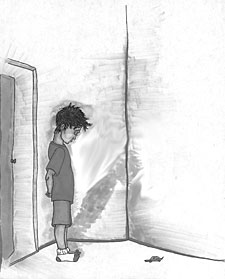 son from us a little over a year ago. It is terribly painful that our boy is away from us. He needs us and we need him.

CPS opened the case two years before they took my nephew when a doctor called child protective services against us for reasons we have never really understood. For two years, the CPS caseworker left my nephew in our home but kept writing reports suggesting that my sister and I were not competent to raise him. My sister suffers from obsessive-compulsive disorder and I suffer from anxiety but we have always been extremely attentive and loving to my nephew. We managed our mental health issues with medication, exercise, prayer, and other calming techniques. But the caseworker said that we were paranoid and overprotective and that this was affecting our ability to parent.

Mainly, she did not like that we were homeschooling our boy.

We had tried public school when my nephew was 5 or 6 but we felt that the staff were young and inattentive and that our child would not be safe or learn well in that environment. When you don’t have a lot of money, good programs for children with autism can be hard to find.

Our homeschooling was a daily routine of 4-6 hours. We taught my nephew daily living skills and we worked with flashcards to teach him to communicate through pictures because my nephew doesn’t talk. My nephew also worked with a wonderful occupational therapist for two hours once a week until she stopped taking Medicaid.

We sometimes wondered what would happen when we all grew older and my nephew grew harder to care for. We did have some challenges with him—he grew very nervous when he had to go to the doctor, to the hospital for procedures, or when we had tried to take him to school. He also is non-verbal and we didn’t know how well he would function in the outside world when we were no longer able to care for him. Still, my nephew was making progress. We had reason to believe he could read and we knew he was very, very smart. We thought we were doing what was best for my nephew.

Usually, my nephew seemed content. He loved his movies and catalogs, magazines, toys and books that played music or talked. He loved to run and swing and be outdoors.

A year after the child welfare investigation began, the magistrate told us that we needed to send our boy to school. Change is extremely difficult for individuals with autism, and over his first year returning to school, my nephew missed several months.

In part, we kept him home because my nephew has a poor immune system. When he got sick he’d be sick for weeks at a time. When we did send him, his nose would run constantly and the school personnel never wiped it.

Then my mother died and we were forced to move from the only home my nephew had ever known. These were two more difficult transitions for my nephew to adjust to.

At times, my nephew refused to go to school. There were also times that we should have sent him but we didn’t. We know that now. We learned it the hard, pain-filled way.

The caseworker said it was due to our anxiety and paranoia that my nephew missed school and a little over a year ago, CPS took him citing “educational neglect” and put him in a group home.

My nephew is easily overwhelmed by noise and activity. Even so, he now livesin a chaotic, loud, and crowded group home that we believe causes him constant stress.

Yes, there have been some positive changes. My nephew is eating many more foods than the small number he used to eat and he is also drinking more water. We think this is because he is around other children and he is interested in what they are doing. He is also in a school/day treatment program. For the most part, he has learned to be a part of a group of his peers and interact with them, which he had trouble doing before.

We realize now that a school with the right program for kids with autism is pretty beneficial for children. It gives them a place to feel comfortable that is separate from their home, and allows them to be around classmates who are similar to them.

But the negatives are so terrible that they far outweigh the positives. My nephew has been ripped from our loving care. We believe that he does not understand why he is away from us. He also is constantly ill and has even had his tooth broken three times.

Plus, the house environment is not at all suitable for a child with autism, who needs order and calm, not chaos.

There are 10 young men up to 21 who live in my nephew’s house, usually with two staff members per shift in the daytime and only one at night. There are several boys with self-injurious behaviors. One boy plays with balls and doesn’t care who he hits. One child bangs his forehead and has a permanent goose egg as a result. Two boys scream and yell very loudly.

Though my nephew cannot speak to let anyone know how he is feeling, what we do know is that his obsessive-compulsive behaviors have increased tremendously since he entered the group home. He also continuously scratches up his back to the point of making it bleed. When he was living at home, the only times he scratched was at the doctors, the hospital or somewhere else he wanted to leave.

At the end of every visit at the group home, my nephew would grab the tote bag that he arrived with, his coat and shoes, and head out the door to our car. Other times, he would grab our hands and pull us out the door with him. He would also look directly into our eyes for a long time as if he was trying to tell us, “Take me home now.”

They took my nephew from us because they said we were not meeting his needs adequately. But the group home does not have adequate services to meet those needs. We don’t know what my nephew is learning at school because the school will not tell us. The group home only has an occupational therapist and a physical therapist come to the home two days a week to work with all the boys separately in 15-20 minute sessions. From what we have seen, they do not work on much at all.

Five or six months ago, the agency started the process of transitioning my nephew back home. For six weeks we were allowed home visits with him three days a week. Then a new caseworker came on who seemed to know very little about autism. When the group home notified her one day that my nephew had scratched up his back, she decided it was a sign of his heightened anxiety about returning home to us, and she e-mailed everyone that she was stopping the visits and the transition to home.

We explained to her the scratching history, as did group home staff. We also explained that my nephew had already scratched himself when we picked him up from the group home. But it seemed to make no difference to her or to anyone else.

The court refused to reinstate the transition back to home. Then the caseworker and her supervisor succeeded in changing the goal from reunification to long-term out-of-home placement at the group home.

Now we have visits with my nephew only once a week for four hours in our home. We are doing everything we can to fight to bring my nephew back home. We have saved up to hire a private attorney. We also have found an advocate who is working with us. We hope a new hearing will yield a different result.

The pain of seeing our boy in pain is so excruciating, there are no words that can describe it. I cry for him every day. We just do not understand why they will not give our boy back to us.

My nephew has a safe home with people who love him more than anything in this world. He can go to school while living at home. All we want is for him to be allowed to come home.