On July 26, Administration for Children’s Services Commissioner John Mattingly announced that he was stepping down after seven years of 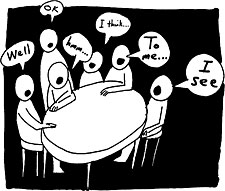 One group affected by the change is the Parent Advisory Workgroup (PAWG), a group of parent advocates citywide who bring parents’ perspectives and needs into focus at quarterly meetings with ACS’ commissioner and top staff. Here, PAWG members share their experiences with Commissioner Mattingly and their top agenda items for the new administration.

Shelley Shaw, parent advocate, ACS Office of Advocacy: I am a co-chair of the Workgroup and it’s been a wonderful opportunity to sit down to address our concerns. We are able to communicate with the commissioner and his staff and see that the commissioner is really for parents.

Wanda Chambers, parent advocate, Brooklyn Family Defense Project:Child welfare is still a really hard system for parents. I don’t think people on the upper level really get that. I mean, the commissioner is not making home visits, he can’t get out in the field. By taking time out to hear what we had to say, the commissioner and his staff could understand our concerns and get the ball bouncing.

Sandra Killett, parent advocate, Children’s Village: I am not so delicate with the commissioner. Sometimes PAWG members would say, “We can’t ask the commissioner to do that!” I’m a co-chair of the Workgroup and I would say, “Yes, we can! We can challenge him. In those meetings, we’re on equal footing.” Yes, he’s the commissioner, but he walks on two legs just like I do, and my job is to be respectful while getting my voice heard and speaking up for parents.

A Record of Accomplishment

Shelly: One concern our group had was that we always see images of children in care but not of families reuniting. We wanted the system to recognize parents who have reunited their families. For three years now, we’ve held Family Fun Day where reunified parents come out and enjoy the day. The commissioner speaks, we have activities for the kids, and it’s all you can eat. I think parents really appreciate being able to say, “Listen, I did it! I got my children back in my life.”

Another concern we had is that foster care agencies were not allowing the foster parents and birth parents to have a relationship. We know that families need to have a relationship, with the child as the most important person. Now we’re in the fourth year of hosting a forum to help staff, parents and foster parents understand the importance of working together. Agencies also hold Parent-to-Parent meetings to introduce families as soon as children enter foster care.

Sabra Jackson, coordinator of the Parent Advocate Network, Child Welfare Organizing Project: When my children went into foster care, it was important to me that the commissioner know me as a person and know my story. Did I need help? Yes. But I did not need my children taken away. I didn’t know how I would ever reach the commissioner, whether by a letter or action. Through the Workgroup, I did get to know him. He even met my daughter, who was most affected by foster care. That’s personally satisfying to me—he’s seen my progress and he’s seen the progress of so many parents.

Sabra: In Mattingly’s seven years here, he’s done a lot to improve the system for families. The fact that we have been able to speak directly and candidly with the commissioner and get some honest feedback about policy has been part of that. When Judge Richter takes over, I think he will be the same. There’s plenty of work still to do. We tell the commissioner all the time, “Ok, you’ve made a policy, but it’s sure not practice.”

Sandra: For instance, the Initial Child Safety Conference is a wonderful idea. The concept is that ACS staff and the family come together to make a plan for keeping the children safe. But we see that at many conferences, the mindset is removal. The ACS staff have already decided. It’s supposed to be a question: Do we need to make a removal? But it’s not really open or honest.

Wanda: Sometimes they hold the conference and the family isn’t even there! Child protective workers need far more training about being diligent in keeping families together. I believe we need to improve training so that child protective workers really understand poverty. Every home is not going to look like your home. I believe in safety, but I don’t believe in all the removals and petitions that we’re seeing in Brooklyn.

I think Judge Richter stands for a lot of good things. I remember doing presentations to new attorneys to sensitize them to family poverty and help them understand the families they’ll work with. A lot of removals don’t have to take place if services are put into place.

Sabra: For me, it’s been important to keep saying to the commissioner and his senior staff how important it is to integrate parent advocates into all of the work we do. Many parents who have reunified with their children are now working as parent advocates at foster care agencies and legal representation organizations.

Shelly: We’d also like to see parent advocates as part of MAPP training—the training that all new foster parents must go through. We talk about how important it is for parents and foster parents to connect. Why not bring a parent perspective into their training?

Sandra: When I joined the workgroup, I’d have to tell you that I was not open. But I believe that Mattingly was a good commissioner. When he needed to be questioned, we had no problem doing that, and he legitimately made his staff address our issues. The next step will be to have parents be sitting at the table before you set a policy in place. Parents should be there when ACS is thinking about establishing new policies, so senior staff can hear what that policy looks like to families who will be most affected.

I believe Judge Richter also will have a mindset of understanding families. We’re looking forward to working with him and challenging him when he’s not moving forward. We know there’s a political realm to Children’s Services. Sometimes you need to be reminded of why you are there.